Pilot Knob RV Resort, Winterhaven, CA
I woke up on Friday Feb. 21st and Bill was already up again. I guess I’m sleeping really well as I didn’t hear him get out of bed. Mind you, he doesn’t have to maneuver around the bed like I do so doesn’t spend quite as much time in the room as I do either. Bless his heart for not waking me though. It was just after 6:30 when I joined him downstairs and he informed me that he’d been up for over half hour. 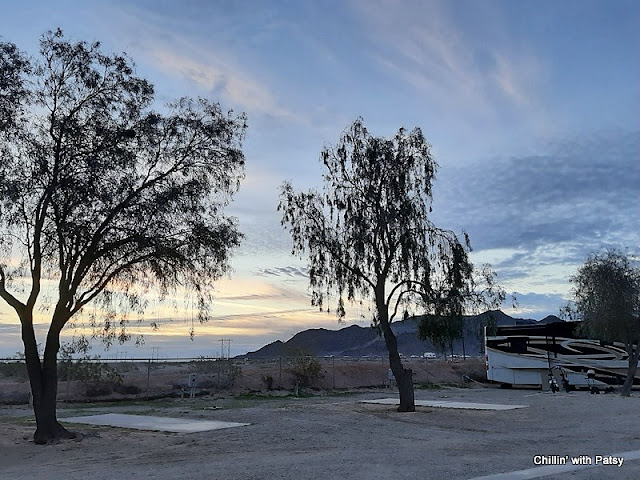 We went for our walk after reading blog posts and it was another beautiful 64F morning with less wind than yesterday. When we returned home, I had my tea and then we drove back to the blm area to get a tour of the Mansion and say goodbye to our good friends. The Kays are leaving the area this morning, heading further east slowly before really hitting the highways towards Tennessee.

They are loving their new Sundance rv a lot and Bill was able to shed a little light on a couple of things that Ken was not aware of. We hugged goodbye, snapped a picture of each other and drove home. I had a date with the ladies at the clubhouse for Poker pool. Just two more games before we leave so I really didn’t want to miss it. Barb, who usually leads it, was absent. She and Gordon left early for his appointment in Phoenix (we think) for a pacemaker. We all pray that goes well.

I had even more successes today at pool, actually aiming AND hitting more balls in the pockets. I still was no where near winning but I’m getting better each week! 😊 Just in time to leave the game for a number of months. LOL. When I walked in to the clubhouse, I saw a FedEx truck pulling away and there was our new toilet! I texted Bill and he was up right away to pick it up. That is great service, we ordered it on the 17th. Yay!

Before I started playing though, a bit of unfortunate news about Mom set me off. It isn’t serious at this stage but the centre where she is living has to inform us (Donna) of any changes. She is deteriorating, without going into details. If you are looking for someone to pray for, we’re hoping she holds on until her children can all get home. I keep saying she is 94 but she won’t be until April. I hope she can celebrate one more birthday, at least. Mom has surprised us before with her strength.

Back home, after the games, I checked out the new shiny white loo and then made us omelette sandwiches. Mine was in a tortilla flat and Bill’s on a toasted bun. I could only eat half. The other half is for tomorrow. With my appetite, sometimes I think I should be dropping weight. Hahahaha.  We took care of dishes and Bill stretched out in his chair. I changed into my bathing suit. Do I feel like the pool today? Not sure. Maybe I’ll just stretch out in my lounge chair here at home. That is exactly what I did.

I sat outside and finished my book before coming in for a few minutes with Bill. Once again, I’m sure I dozed out there and the clouds had pretty much covered the sky by the time I moved indoors. At 2:30 we put our cooler of drinks together (sounds like an ordeal but we really only take 1 alcoholic drink at most and then a pop or water) and carried the chairs to the Wilson’s. Keith and Doug joined us. No puppies today for Happy Hour.

At 5, we went our respective ways and since Bill and Doug each have an item that won’t be used, they swapped out. We got a surge protector for 30 amp out of the deal and Doug got a 50 to 30-amp power cord. We’re all happy! I got washed up first while Bill walked over to the White Lion and when he returned, he did the same. Trying to get a little spiffed up even though we’re just going to a burger joint for supper. We don’t eat out a lot so when we do, it is nice to spruce it up a bit.

At 5:45 we drove to pick Kim, Ken and Keith up. Usually we partake in burgers at the clubhouse on Friday night but since they aren’t serving food here for the remainder of the season, we’ll find them elsewhere. Five Guys is a popular fast food place here so we’ll check it out. It will be far from a $5 meal but a treat all the same.
We placed our orders, surprised to see no combo deals offered and Bill and I ordered way too many fries. Next time we’ll order a medium to split. It was all very good though. 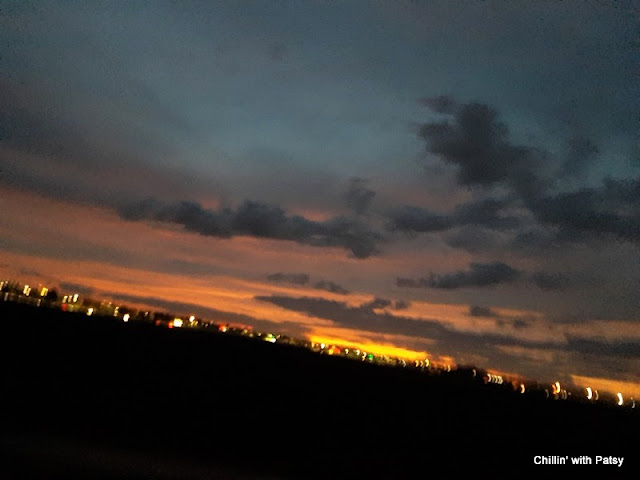 Bill took the scenic route home, which you usually say when you get lost, but in this case, we hit the closed road and had to take a detour to get back on the hwy. Meanwhile, the western sky was keeping me entertained. We were home by 7:30 after dropping everyone off and picking up our deceased ‘john’. Bill put it onto the back of the truck and we drove it up to the dumpster. Luckily, there was room inside one of the bins as most were full to the brim.

Back home, we relaxed for the evening. I finished my post and then sat with Bill. He was working hard at finishing Cross Country, the J.P. book he’s been reading. I finished The Blind Assassin today so can now move on to another one from the cupboard. J.A. Jance’s Trial by Fire is one written about this area so it should be a good read. Tomorrow morning, Kim and I are popping over to see and get a tour of the White Lion. We heard at Happy Hour that Doug and Yuma are moving on in the morning.

This was a good day. Some busy-ness, some relaxing and some good food with friends. I hope you enjoyed yours too.

Posted by Patsy Irene (Chillin' with Patsy) at 8:07 PM