On Friday, Mar. 5th, I was up 15 minutes after Bill left. I was having a pretty good dream but don’t ask me now what it was. I can remember that George and Suzie were in it as well as our friend, Colin, from B.C. They've never even met each other. Explain that one! I got washed and dressed before bringing up my tea.

It was a clear sky with brilliant, glorious sun lighting my way from the east. At Concession 8, there was no hesitation turning onto a county road today. I feel Tigger-ish again, 😊, bouncey, bouncey. I probably need ‘help’, ha ha but it is better than being on the down-in-the-dumps side of life. With a small lunch and a thermos of coffee packed, I arrived a bit early in Durham. I was hovering at ¼ of a tank of fuel, so topped up first. 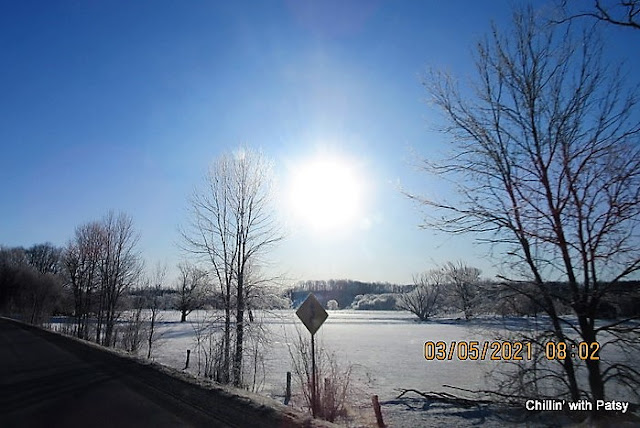 Boy, talk about being down-in-the-dumps!! Well, it didn’t dampen my mood but I was so disgusted as were the other patrons at the laundromat. 3 washers had been used for washing horse blankets. There is a very clear sign ‘DO NOT WASH HORSE BLANKETS IN OUR MACHINES’. Apparently, that only applies to those of us who actually heed signs and rules.

I not only had a mess to clean up on the floors, it wasn’t just straw and hair but a gross mixture of that and (dare I say it?) horse poop!! All 3 of the machines had large remnants of the brown stuff making them unusable until I cleaned them out. I’d just cleaned 2 of them when a sweet elderly lady asked to borrow my broom. She swept in front of another machine that I hadn’t got to yet. We said “check the machine before you put your clothes in!”. Good thing she did. ☹

It was a couple of minutes past 10 when I had finished sweeping and mopping the floor and left the parking lot. I meant to take a picture of the letters on the tailgate that I finished. I’m quite proud of my work on them. Then, I taped up 2 door handles and the tailgate handle before wiping down the inside edges of all 4 doors. A bit of spatter from the primer was easily removed with some paint thinner and it is soon ready to paint! The bed/box has been gravel guarded and sure spiffs up the banged-up metal floor and sides.

We were going to go get one more load of wood but the wind was too cold to be standing outside and Mick (Dundee haha) agreed. Perhaps Monday, all things in our favour. I only worked 3 hours today at the shop and left again with $ in my pocket. I stopped at Dollarama for some batteries for the gadgets I bought yesterday and headed for home. When I’d backed in, I texted Bill to let me know when he is close to home and I would pull Ptooties out so he could back in first.

It was around 4:30 when I put her on the street and walked across to the FoodMart for lottery tickets. I had actually won $5 on the LottoMax so cashed that in for tonight’s draw and bought our regulars while there. Bill was just backing in as I came out of the store to cross the street so hopped in Ptooties and did the same. We are not able to eat at the Paisley Common tonight as they are closed for renos until Mar. 17th. Did I mention that already? Yes, I guess I did. 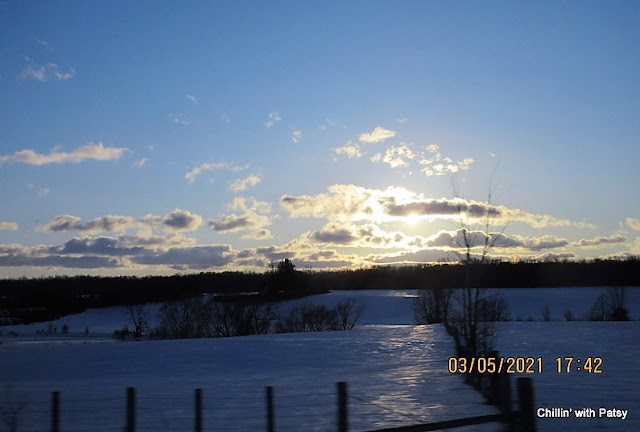 So! We are creatures of habit, as most everyone else we know, and Bill wants to go out somewhere. It is our Friday night way of being good to each other after working all week. 😊 He mentioned Chuck’s in Hanover again but I suggested a restaurant in Walkerton, instead. That’s the plan. Old Joe’s Cabin. As an afterthought, Bill texted Gerry to see if they wanted to join us. I had my shower after I got home at 3 and when Bill came in, he crashed on the bed for 30 minutes.

We met at the restaurant at 6 and once again, it felt nice to be eating out and about. The waitress staff were very friendly and seated us right away. The place sure filled up within the next hour with a lot of little people. Kids eat for 50% off Friday so that explains it. I ordered the hot roast beef and Bill had fish and chips. Both were very good and although I should have left some of the mashed potatoes on my plate – I didn’t. They were very good and not enough beef for leftovers.

We said our goodbyes and arrived home by 8. The rest of the evening was quiet, perfect for a Friday night. I texted Jamie about the mess at the laundromat and he came back with a comical “yes, I heard about the sh*t show!” He was going to check the cameras and see who was using those machines. It would be nice to get to the bottom of it and perhaps address the situation somehow. This was a good day and now we are at our first weekend in March.

Thank you for your visit. Tigger is tired. 😊 (too much bouncing)

Posted by Patsy Irene (Chillin' with Patsy) at 6:49 PM