On Wednesday, May 12th, I woke up at 5:40 am and the house was quiet, with Bill beside me. I dropped off again until 6:30 and woke to an empty bed, lights on downstairs and puppy conversation. 😊 Bill informed me that Gibbs was up through the night and had an upset tummy. He’d thrown up in his crate, I discovered later, and had diarrhea only when Bill took him out. Poor little guy.

Last night he only ate half of his meal so something was up then but with his playing and antics you’d never know. Bill left the house after 7 and I took Gibbs out once more for a little piddle before putting him in his crate. I left around 7:15. There was a fair bit of frost on the grass and vehicles so I started the car in advance and it was cleared by the time I needed to go.

As far as the weather, it is a beautiful start to the day. Pure blue sky and glorious sunshine. Before I left, I sprinkled some water on my flowering plants before the sun hit them. I heard that was a good practice to salvage them from damage. Whether it is true or not, who knows for sure, but I did it anyway. I learned that in my days from living in Rodney, ON and working in London. That was B.B. (Before Bill) 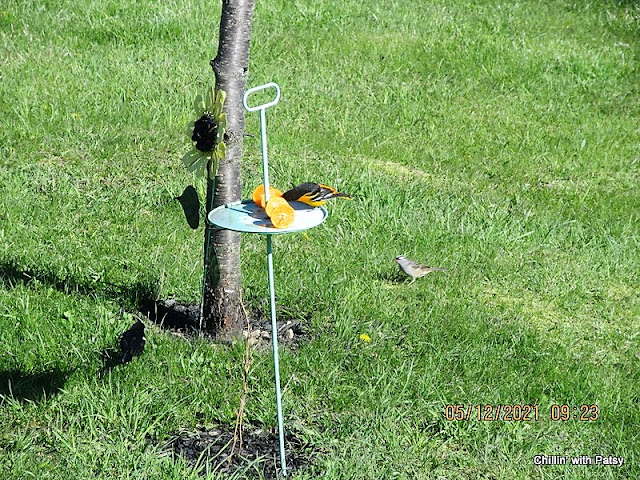 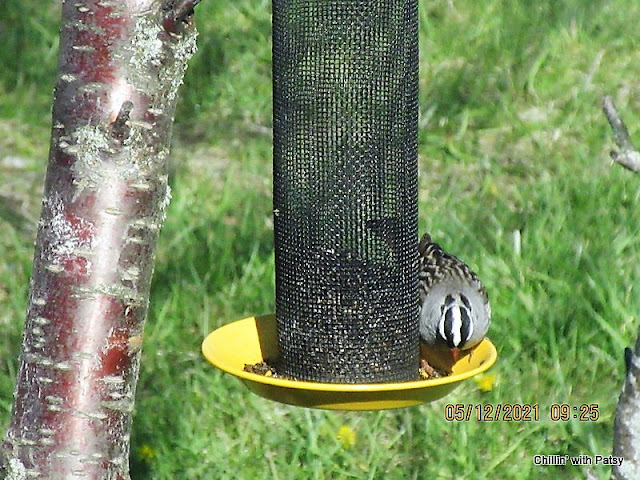 The Mat was empty and it didn’t need too much attention. Things were decent so I went about the norm and finished by damp mopping just the areas that had spillage, detergent or coffee. I drove to Foodland and got my Tangelos for the Orioles and a pack of expensive wieners for Gibbs. Gotta have the best and the prices in the store were atrocious for the beef ones. Henry suggested cooking them and cutting them small for quick and easy training treats. We’ll try it. 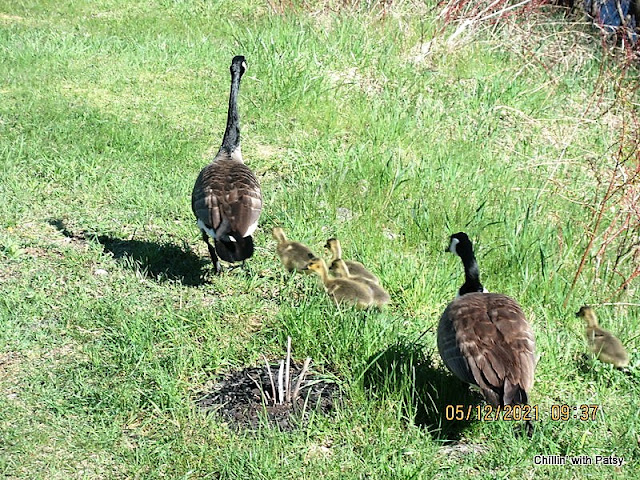 He also suggested pumpkin puree or yogourt for him when he had diarrhea but so far, the little bum doesn’t touch it. I’ve put some in his mouth on my finger so at least some is going in his tummy. I hope it helps. After groceries, I filled our RO jug at the Water Store and booted home by 8:30. Chatting back and forth with my sister, I opened the crate door so Gibbs could walk out on his own – and he did. 😊 Soon, he’ll get the hang of it all.

His tummy was still upset, obvious by his deposits at both ends ☹ so hopefully the pumpkin helps. He sat on my chair like a big boy for a while and when I offered him his breakfast at 9, he had no interest at all. Oh well, he won’t starve. I lifted his dish up. It means he’ll probably eat good tonight so I let him get comfy in his bed and I caught up on blogs and cooked and cut up a couple of wieners. If he doesn’t like those, at least we’ll eat them.


The Oriole didn’t take long in finding the new oranges and delved right in. I wish he’d bring his family and friends. The birds right now are very ‘frequent flyers’ and I have to stop myself from grabbing the camera each time. The Goldfinches especially are constant visitors right now. Blue jays, the odd Cardinal, one Oriole, Red-winged blackbirds and the Crowned sparrows are happy with the food I put out. If it weren’t for the bigger crows/blackbirds, I would fill the feeder more often.


I changed out of my work clothes into something clean and with short sleeves. Today is our day for our first Phizer vaccine. We have had some mixed feelings and certainly know many who are quite opposed to it. However, despite the controversy, this is our decision and we are doing what we feel is the right course of action for us, our life and lifestyle. We want nothing within our control to stand in the way of traveling south this winter. 😊

I left the house at 10:30, thinking I’d be early. You already know that I like to be early especially when it is a set appointment time. Bill’s shot is ½ hour before mine so will go directly from work. We may see each other, we may not, I’m not sure what to expect as far as line ups and the area at the P & H Centre in Hanover. At least it is close to home and I can relax this afternoon if necessary.

I’m pleased that Bill called once he arrived to give me an update on the parking at the Centre. I probably would have turned in the wrong entrance so once more, my Sweetie is looking after me. When I arrived, it was pretty busy but there were many folks clad in bright safety vests to direct us where to go. One fellow stopped me and asked me about my Ptooties license plate. He said he liked it. That was nice. 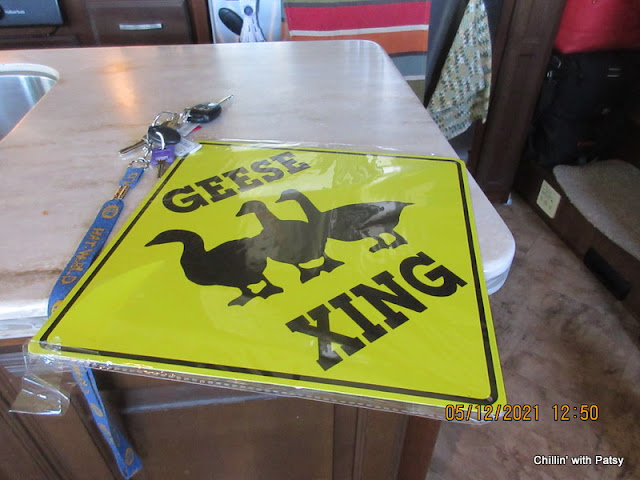 Bill was waiting in the parking lot area for me and walked me to the sidewalk before he left to go back to work. The whole thing was a quick process and very well organized in the huge arena. Many friendly greeters had us in to our cubicles, with no more than a 5-minute wait before a nurse wheeled up and gave us our vaccine. After waiting 10 minutes we were free to leave, that period was for our safely so we would be driving immediately after in the off chance that we felt nauseous.

I w
as on my way within half hour of my arrival. Easy. I can’t fault anything about the experience even though I didn’t like the constant hand sanitizer at each station when my hands were full. Back through town, I stopped at Walmart for some doggy things. Things we had but had since gotten rid of not knowing about a new pup. Murphy’s Law I guess, but Gibbs is entitled to new things too. 😊 He went outside when I let him out of his crate and still had the runs.

One of our geese families is getting more familiar with the grass up here so I have opportunities for pictures but also have to shoo them away from our sitting area. With Gibbs now running around, goose poop is even less welcome than it was before! I had a parcel in the mailbox from Norwex so I was happy to get the popular dust mitt, enviro and window cloths. Now I can give my own testimonials! 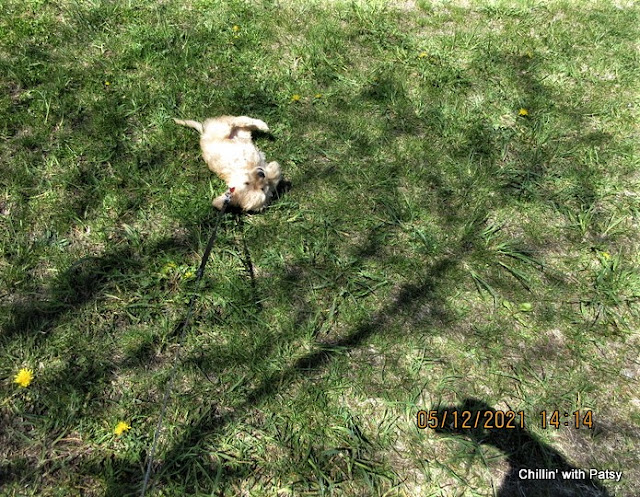 Within minutes of bringing Gibbs inside, another parcel was dropped on our step. I didn’t hear or see anyone so not sure which courier it was. This was my Geese Crossing sign and just on time too with all the babies running around. I wasn’t expecting it until June 1st so I’m doubly glad. The afternoon went swimmingly with more of the same – snoozes, drinks of water, snuggles and chases outside. 😊 I’m not even talking about me for half of that. I admit to sharing the snuggles and chases.

We took a walk down the lane to get the mail around 3. Well, I walked and the little munchkin rode in the serenity of my arms. He isn’t into walking yet just running when we chase him.

Back inside, I made myself a cup of tea. When Bill came in shortly after 5, Gibbs lifted his head and his tail wagged in greeting. So cute! They sat together although there was no snoozing going on as Gibbs just wanted to nibble and chew.

For supper, I was inspired by an online conversation with our friend, Deb D to use Rosy our air fryer. Tonight, our chicken strips were delicious done for 25 minutes. I fried a potato for Bill, cooked mixed vegetables for both of us and warmed up some of the leftover cauliflower rice for me. It was very good and for dessert, we tasted the Keto peanut butter pie. Oh my, it was rich but soooo good. During dishes, Gibbs wandered and at one point touched the bell hanging on the door.

He’d just been out to piddle but I grabbed him up and out we went again. There were about 6 drops and then play time. My goodness he makes me laugh! I was in my slippers and for some reason they make him want to chase and bark at them/me. I was out of breath when I finally snafued him up in my arms and brought him inside. He wandered around some more and finally crashed in his bed. It seems like he’s feeling better but we just hope he eats well tonight.

We watched some television together tonight and relaxed. It was a gorgeous day today with temperatures reaching 14C/60F and we are looking at a repeat tomorrow and Friday but a few degrees higher. Yay! Finally, a break without rain. I hope you are also seeing some relief in your area. Gibbs ate about half of his supper tonight so that is good news. 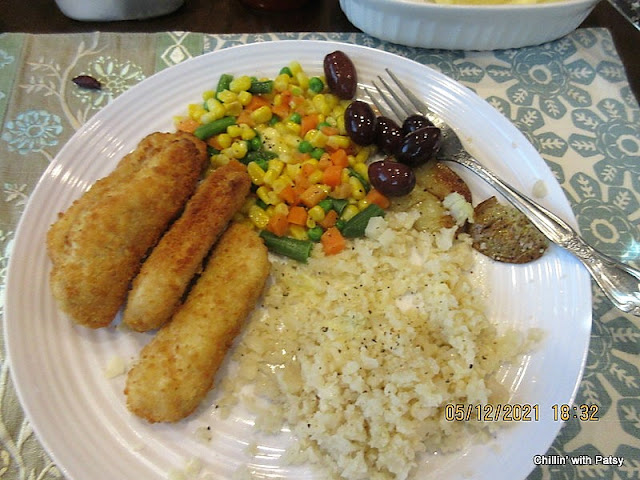 Thanks for stopping in today.

Posted by Patsy Irene (Chillin' with Patsy) at 7:43 PM