When I woke up on Sunday, May 30th it was 6:30. I woke first and was surprised not to see Gibbs in bed with us. Nope, both he and Bill were still sound asleep. 😊 The furnace was running so I waited for it to stop and took my ear plugs out to listen for any sounds downstairs. Someone was tired! Within 5 minutes, I heard a whimper and I slipped out of bed and took the little sleepyhead out.

I then went about sorting the laundry while Bill got up and about. Unfortunately, I must not have kept him outside long enough, as Gibbs while running around upstairs had a couple of accidents. ☹ Darn, we were doing so good! He does ‘leak’ when he gets excited but who am I to berate that? The poop was unacceptable though and we scolded him appropriately and put him outside right away.

Bill stayed home with him while I went into the Mat to clean and do our two loads. It is a gorgeous day so I brought them home to hang. With that done, I took my tea and laptop outside to the patio table in the shade and worked on yesterday’s blog post. My laptop wouldn’t open for me last night, just gave me a black screen. I have no patience for that so just closed it up. Gibbs was out with Bill so I wanted to be close enough so he would leave him alone.

Bill was putting trim on the porch and putting the carriage bolts in to secure the deck to the posts. Both of us are so pleased with this change, having a nice level entry like this is wonderful! Then, when he’d gone as far as he could, he took the tiller up the hill and tilled my garden plot and a couple of spots down the corral hill where it is very uneven and rocky. This will make it easier for him to cut with the riding mower.

Now, I can clean the areas up and buy some plants for my vegetable garden. I won’t go crazy with the tomatoes this year since I don’t need to make anything extra. I haven’t fully decided what all I will plant. Tomatoes and peppers for sure. Maybe cucumbers and/or zucchini. Bill isn’t a big veggie eater other than corn, I’m sure you’ve noticed, so no point in planting peas. Hmm, beans maybe?

I will decide in the morning. Green onions, lettuce and radishes are always a pretty good price when they are in season so I won’t bother with those. I spent the rest of the day outside, pulling the few weeds out of my freshly tilled garden. The earth is so nice now, after 4 years of planting. There are still rocks, mostly the size of an egg or smaller so I picked those out. Gibbs was a big help, playing in the dirt and grabbing the weeds and stones. LOL 😊

Finally, I had to put him inside as I couldn’t keep things out of his mouth at the same time I was working. I do get a laugh out of him and enjoy the time we spend together. Bill was down in the Hangar, making progress on his plane. I’m glad that he is taking a break from the outside work. We could have also gone for a ride on Jazz, it was warm enough, but both decided the priority today was to lay low and relax.

I haven’t heard from the fellow who was going to stop in to see the chain saw so maybe he changed his mind. Oh well, I just think he should have let us know. The night isn’t over yet and maybe he’ll be in touch, he seemed nice enough in his texts. 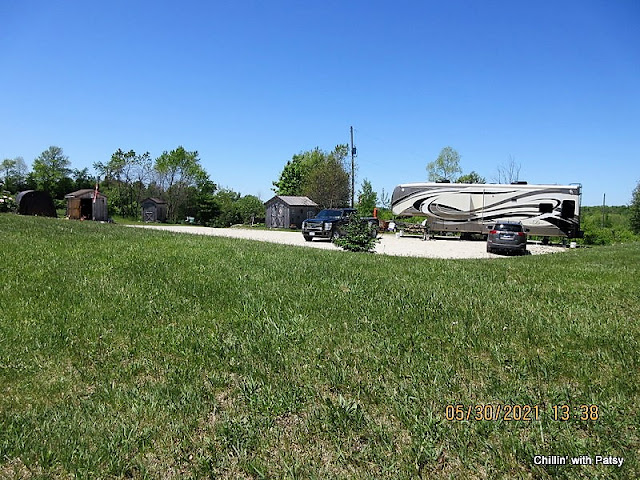 When I finished the garden and was on my own (no Gibbs), I raked and removed the stones and grass/weed clumps from the newly tilled area up on the berm. I didn’t have the energy today to clean up the mess but will get a fresh start tomorrow on that. 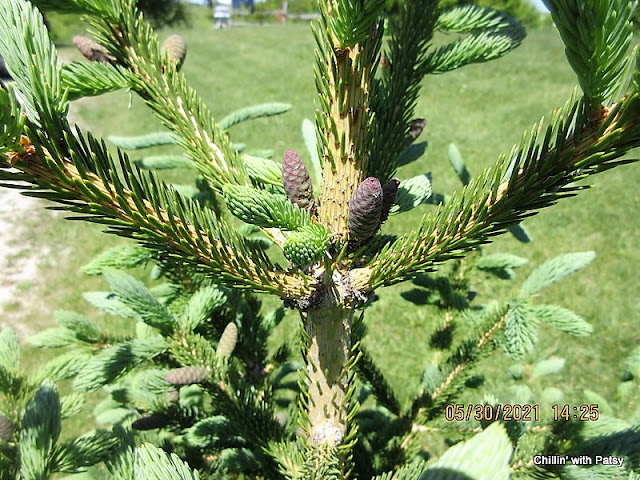 I came down from the hill and brought my book and Gibbs out. We sat near the Suite and I had him on his long leash so I could relax. That worked for about an hour and I put him back inside. Around and around the base of my chair he went and I had to keep untangling him. What a goof! 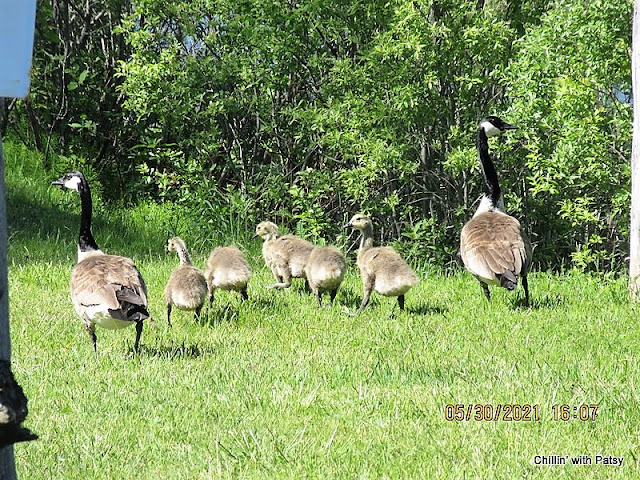 Bill joined me around 4 and when I went up to bring the clothes in, he stretched out in the hammock and fell asleep. He didn’t want sun so it was a good spot although he woke up a bit chilly.

At 5:30, Bill lit the Weber Q and began barbecuing the burgers. Inside, all I had to do was get the condiments ready and warm up the buns at the right time. The burgers were good but I didn’t have anything for dessert tonight so I hoped he was full enough. Maybe strawberries, cream and cookies later? 😊 Gibbs ate all of his supper again and when we went out soon after, he took care of business pretty quickly.

I’ve started him using the retractable leash again, the first week was too soon. He just laid down with it then. Today, he walked really good with me down the laneway, staying beside me most of the way. Slowly but surely, we’ll get this little guy trained. There are so many new things for him to learn and he’s doing pretty well!

The evening went well, I watched 2 episodes of This is Us that had been recorded and Bill watched a movie upstairs until 9. We came together to watch The Good Witch and that did it for the night. This was a great Sunday, spent with my two sweeties. Accomplishing a couple of things was a bonus! At 9:40 we went out and looked up at the clear sky. It was the first time we've seen the ISS (International space station) this spring. 😊

Thank you for your visit. This ‘summer-like’ weather can last forever. 😊

Posted by Patsy Irene (Chillin' with Patsy) at 5:35 AM