A Dull No Nothing Sunday

On Sunday, Sept. 25th all 3 of us slept in. It was 10 minutes before 7 when we got up for the first time so that was so nice on a weekend. We had no commitments today which was nice too. Bill made his coffee and drove over to the Acreage to get our water bladder filled while Gibbs and I stayed inside.

It wasn’t windy or rainy when he left but it was only around 10C so I didn’t envy his job. I do give him lots of credit for looking after those outside things. 😊 That’s the kind of day we’ve had. I have a couple of things to do for the weekend but hope to accomplish them this week once I find out if I’m working at the auto shop.

We phoned Marilynne around 9 to catch up on things and then contacted our friends in Dryden. They are still without a fridge but trying really hard to be positive that things will happen this week. I’ll continue to keep them in my thoughts and prayers. ☹ I can’t even imagine being that long without a resolve. I know now that they have a ‘substitute’ rv, but to be without their ‘home’ for so long is infuriating.

I sat with Gibbs and read my book, the plot has thickened, so to speak, so it is getting hard to put it down. We had toasted tomato sandwiches for lunch and I’ve got ribs out for supper. Darn! Still no potatoes, talk about getting creative! I’ll put my thinking cap on. After our lunch, we called our friends in Alberta to catch up with them on their plans. Fingers crossed that our paths will cross with them again too. ♥

Around 1:30, Gibbs and I went out for our walk. When the sun was beating down, in between the cloud breaks, it actually felt hot! It was 15C/59F by now.There is still no wind so it was very pleasant even when the clouds ruled. We walked on the semi-muddy tracks on North Line to the corner until we heard the big shepherd barking his annoyance at us. That’s where we turned around. I don’t quite trust their fence security when he is jumping up on it. I don’t believe in taking chances like that.

Gibbs was ever the performer on the way back, running in the ditches, hopping like a rabbit and snorting like a little piggy with his nose rooting in the ground. I got my laughs and only wish I could share the videos I took with you. 😊 We got back up the lane just in time as big gentle rain drops began dropping. That walk felt good and got me up off my butt too!

I had thought that I’d go back down the lane and pull the dead flower stalks from my tiger lilies but the rain changed that. It is early, maybe I’ll get out later. The Jays are flitting back and forth at the suet feeder, their colours so vibrant against the greenery which is brilliant from the rains. The boys had a snooze, Gibbs was on and off his Daddy like a yo-yo so I don’t think he got much sleep. Maybe neither of them!

By 2:30, it wasn’t looking like I’d be getting outside so I opened a bottle of a drink Patty left with me. She didn’t like the flavour and although I don’t have the recommended Tequila, Vodka is what I added. It’s very sweet tasting even though it is sugar-free but I like it. Next bottle, I will add sugar (salt?) on the rim and blend with the ice. I read more with Gibbs scrunched up either on me, over me on the back of the chair or beside me. Nice and cozy. The rain has returned off and on. 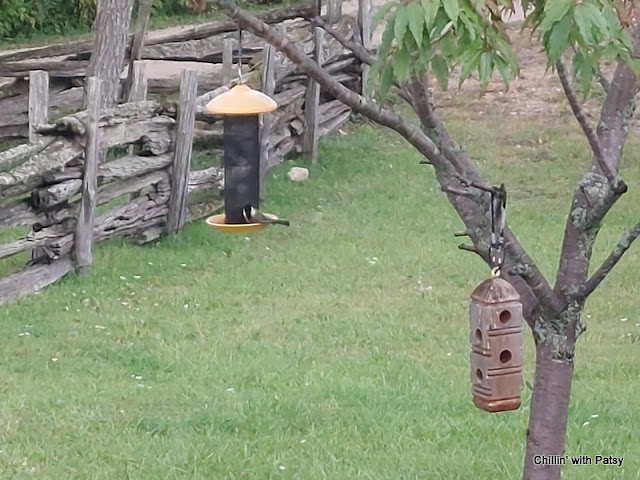 Bill went to the Hangar to putter. 😊 I texted M about work tomorrow, thinking it would be nice to know before I get up in the morning. Since I clean, I wanted to know what kind of time line I’ll be on. The truck is still in the shop because the paint isn’t drying. This damp weather doesn’t help even with the heat he has running inside. Therefore, no work tomorrow. He’ll let me know when I’m needed. I like the $$ flow but I’m happy, especially this week with a busy weekend.

I started prepping the pork ribs with the rub I’d made ahead of time and had Madame IP do her stuff. I then cooked some long grain white rice on the stove and with 5 minutes left, I cooked the mixed veggies in the microwave. I added cream of chicken soup to the rice for added flavour. Supper was ready around 6:15 and even though I couldn’t finish the ribs on the Weber, they were still very good with sweet & sour sauce.

We watched the second episode of The Voice that was pre-recorded and enjoyed the remainder of the day together. This was a good day.

Thank you for checking us out.

Email ThisBlogThis!Share to TwitterShare to FacebookShare to Pinterest
Labels: dull Sunday but still a good one
Location: Priceville, ON N0C 1K0, Canada