On Wednesday, Sept. 22nd Bill was up at 6 and after Gibbs and I came down to say goodbye, he left around 7:15. Today, his destination was Neustadt about 30 minutes from home. I didn’t have to go anywhere today, so I dawdled around for the morning with my little furball. After reading comments from friends on my blog from Tuesday, I made the decision to take my paints along this winter. 😊 Thank you to those who helped ‘push’ me in that direction. 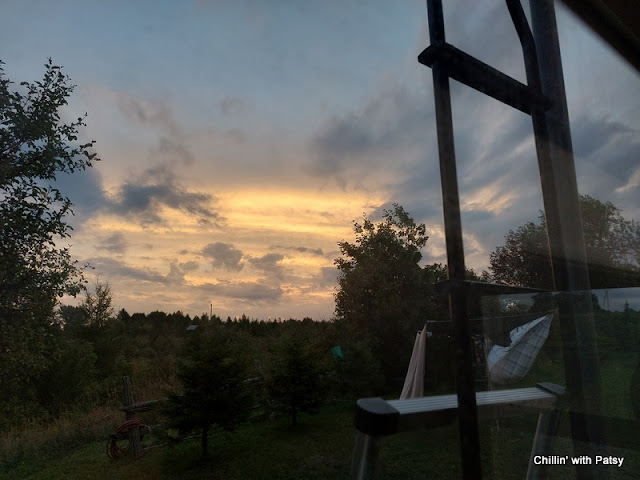 With that in mind, I went back out to the Bunky and puttered out there putting more stuff away. I brought puzzles with my 2 paint containers and nestled things neatly under the bed. It's always so neat under there when we pull out. 😀We were having company arrive later and I thought that I might make a run into town to wash the truck, after Bill assured me she would fit into the wash bay. I touched base with when Patty and Duncan might arrive and then hopped in the shower.

Remember their ‘site’ marker that I made earlier in the summer? I moved it down towards the corner for today, giving more space between us and room for Bill to unload water if he needed. It was around 10:30 when Gibbs and I went for a walk, ever watchful at the sky. One minute, light fluffy clouds and the next brought dark heavy clouds to the north. Getting wet was not on MY agenda but we had a greeting card to get in the mail.

We didn’t get wet and rather enjoyed the walk down to the corner and back. At 12:30 our company arrived and got set up easily in the ‘new’ site. 😊 The clouds were still playing tag, like that flag football game with varying colours trying to reign. Reign not rain. We parted ways for lunch just as a few, maybe 10, drops of rain teased us. There was blue sky to the west coming our way and the black clouds moved further north.

The rest of the afternoon was catching up with their travels and talk of our future travels in 30 days or less! This month is going faster than any so far, maybe because there is a countdown and maybe because I’ve got a deadline for something. Bill has a special birthday at the end of the month so I’m planning a gathering/party for him. It isn’t a surprise so I can write this (he’s my most dedicated reader ♥) but he doesn’t know the details other than the place and date.

With only a week and a half left to get things settled, I’m feeling a bit of pressure so it is wonderful that I’m working around the corner for a couple of weeks. There are only certain things I can plan ahead of time though so I think I’ll be taking Thursday off as well as Friday next week at least to put things in place. 😊 We had sweaters/long sleeves on and off for most of the afternoon as we chose to sit outside.

It was quite windy up here on the Ridge too so that was either a blessing, when the sun was beating down, or a curse, when the clouds were heavy. Gibbs and I took a walk to the mailbox after 3 but there was nothing to retrieve today. There was a greeting card for me yesterday but I won’t open it until my special day, which is also close.

Bill arrived home from work around 4:30, I think it was, and immediately hopped on the mower. It needs some attention to the steering so he rode it down North Line to the service shop and I followed to bring him back. It’s always something but then again, we don’t buy new equipment and things will go wrong on older machinery. It is to be expected. ☹ 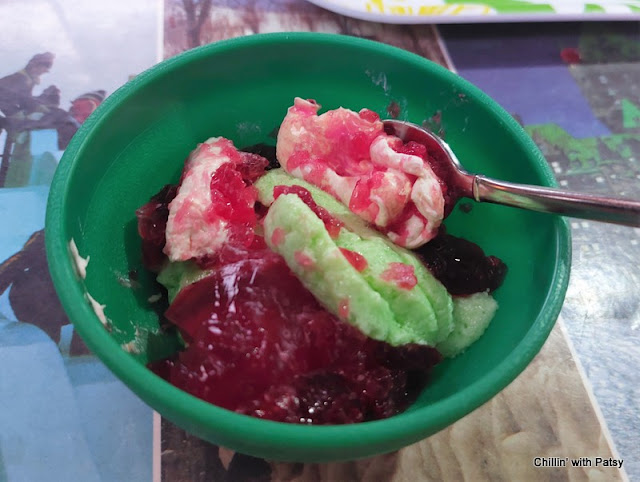 We had a Happy Hour drink together, a new drink Duncan and Patty introduced to us, but I can’t recall its name. it did involve ginger beer and rum and was an interesting change. We liked it. For supper, their treat again was shepherd’s pie with coleslaw and pickled baby corn. It was delicious and I served the two options for Jell-o, one blended with cream cheese and the other with it only as a topping. I also took a few oatmeal peanut butter cookies over and it was all enjoyed as well.

The evening approached, getting dark so early, plus with the clouds, even earlier. It was a great day, so nice to see our friends again for one last time before we say goodbye for the winter. Bill and I watched some tv together until 11 and I went to bed with Leroy Jethro. He’d been squirming on my lap for an hour. Bless his little routine-fixed heart. ♥

Posted by Patsy Irene (Chillin' with Patsy) at 9:36 AM