I’m Getting Spoiled! No Complaints Here!

On Tuesday, Sept. 13th  were all up by 6:30 and Bill was soon saying goodbye and off to work. He took Ptooties today because of the distance he was driving. I had my first cup of tea and then at 7:15 I drove into Durham to clean. Kaitlyn was going to meet me there but I wasn’t sure why. I hope I’m not getting canned! 😊

It was a cool morning but felt much cooler inside the Suite. I wore shorts because it is so hot in the Mat. I also stripped the bed sheets and duvet cover as they needed to be washed while I was in there. I was done my hour shift and folding my sheets around 8:45 when I thought I should touch base with Kaitlyn. I’d expected her before I left. She walked in 5 minutes later.

It was after 9 when we parted ways and I went first to Foodland for milk and then to the bank for Bill. I was home by 9:45 and made a coffee. I remade the bed and wrestled with the duvet and cover but eventually came out the winner. I know everyone has a trick to doing that but for me it is a lot of tossing and turning, pulling and tugging, not to mention the words uttered in the process.

It would probably have been funny had you been a fly on the wall, watching. It is easier when Bill is here to help and I could have waited but………didn’t. Gibbs wanted to help but when I said ‘hold this’, he didn’t quite grasp what I meant. ♥ I felt cool inside, even after the tousle in the bedroom, so made a bowl of vegetable soup with crackers for my lunch. That hit the spot and seemed to warm me up a bit.

I did change into long pants and a sweater before Gibbs and I went for our walk. At the corner, the German shepherd and boxer barked their fool heads off and I’m not sure how strong that door is that the shepherd is jumping up on so we turned back for home. I shook the mats and dust mopped the floors and then went to the garden to check out my garden fare.

There were a lot of tomatoes which surprises me because the plants themselves look pretty weak and unhealthy. I gathered more than my hand could hold so cupped them in my shirt, the way I remember collecting apples in my youth! 😊 I might have to make something with them since Bill doesn’t eat the little ones, not even in a salad. 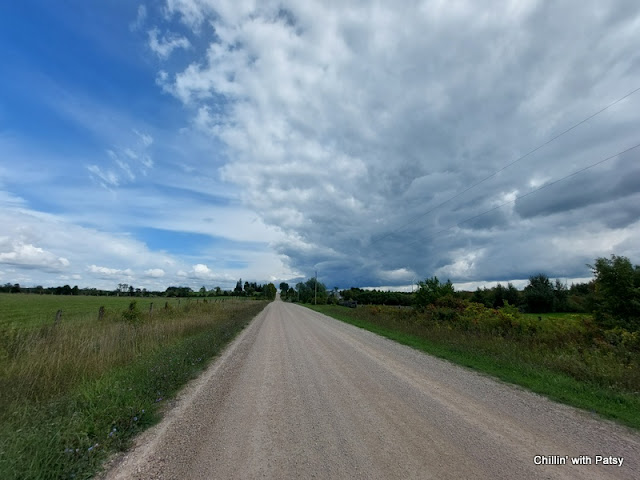 With a cup of tea, second of the day, I sat and began my post for the day. We have a long day tomorrow, both off work, heading in to London to meet our new doctor. Ours moved from general practice to geriatrics in nursing homes so this will be a first-time visit. Gibbs will be going along for the day as well, so he’ll be happy not to be left at home.

I decided on a simple supper tonight after last night’s ‘gourmet’ meal. Ha ha. Pancakes and bacon. I know Bill will be happy with that when I tell him. ♥ It is just the right amount when I halve the recipe and with butter and local maple syrup, we were full. Well, we did have room for a couple of pieces of guilt-free fudge. 😊

It has been a funny day for weather, cool, not getting above 18C/66F all day. I know that sounds warm but with the cool air and cloudy skies most of the afternoon, it felt cooler than that. We sure can tell that fall is around the corner, and I think we’re all experiencing the same thing. This has been another nice day with a couple of hours of running around this morning. 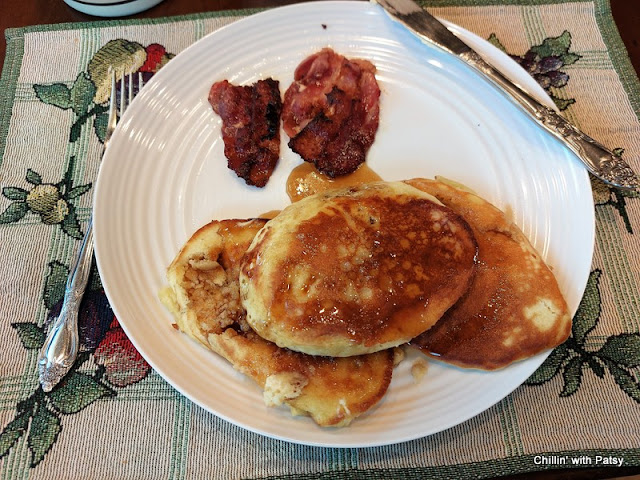 I’ve typed up a list for Kaitlyn and Sage to follow. It lists my routine, the order of laundromat chores. They can switch it up if they want but Kaitlyn was happy for the gesture. We watched some tv tonight and made a list for Costco for tomorrow.

Email ThisBlogThis!Share to TwitterShare to FacebookShare to Pinterest
Labels: spoiled from days off
Location: Priceville, ON N0C 1K0, Canada