Can you Say “Miserable”? A Busy Morning Regardless

On Monday, Sept. 26th things were back to a normal work week for Bill. Almost. He didn’t have to leave the house quite so early, as he only had to drive to Hanover to meet Billy. They will be working there for a while, re-doing 3 bathrooms. At least it is nice and close to home. I asked if he could take Black Beauty as I wanted to do some running around and Ptooties was just easier.

He left around 7:30 and at 7:45, I headed in to the laundromat. It was a cool start to the day but mostly damp and gray. By the time I’d finished, the skies had opened up and seemingly didn’t stop much all day long. The winds picked up a bit but it was just plain miserable because of so much rain. I was in and out of 3 stores in Hanover, getting groceries for the household plus a few other things for the weekend. With no thought to take an umbrella and no available hand to do it anyway, I got showered on three times. Oh well. It was a long morning but I feel I accomplished a lot. 😊

Back home, Gibbs helped me unload the car – well, he jumped into the car, back seat, then front seat, peeking over the seats to watch all that I was doing. I wish I had had my phone at the ready, it was so darn cute! ♥ I put some things into the Bunky and remembered later to tell Bill that it was off limits to him for the time being. Gibbs and I came inside and that was where we stayed for the rest of the day.

I had some chicken broth from the ribs for lunch with crackers and avocado. Surprisingly, it was filling enough to keep me sated until supper. Bill was home before 5 and at 5:30 I started supper while he dozed. This afternoon, I was able to finish the last couple of chapters of my book. It was good, written in a future setting, 2060, so it began with some wording I had to get used to. However, it ended up being a page turner for the last half. Good story. J.D. Robbs ‘Indulgence in Death’. 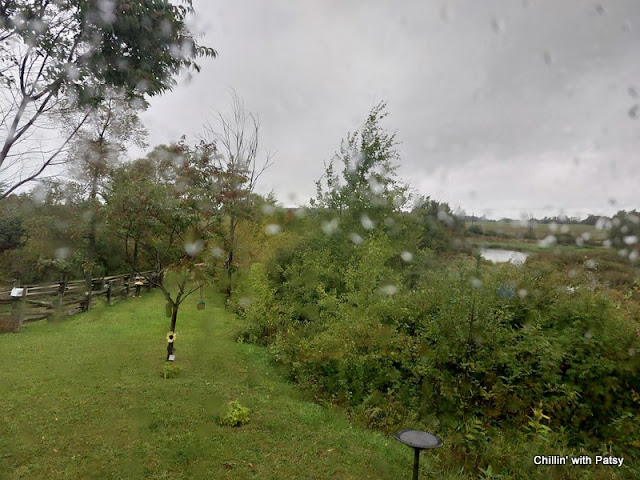 Supper was hamburger gravy with mushrooms and onions and carrots. I reheated the leftovers from a previous night and it was a great meal for a wet rainy evening. We topped it off with Chapman’s caramel praline ice cream. Yum, we haven’t had any in the house for a while. Bill is only working half day tomorrow so he didn’t need to make a lunch. He loaded the dishwasher and we sat together for a busy evening of tv watching. 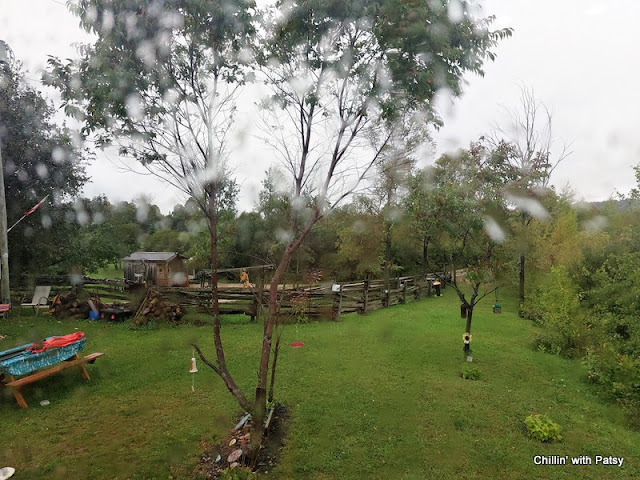 Our Tuesday nights have changed to Monday nights again this season and between recording some and watching others, it kept Bill hopping. On his way home today, he stopped at our Priceville post office to get our mail-forwarding set up and paid for. Again, during the winter while we're away, the mailbox will be put away and Donna and Gerry will accept our mail. This was a miserable ‘weather’ day but otherwise, a fine Monday. 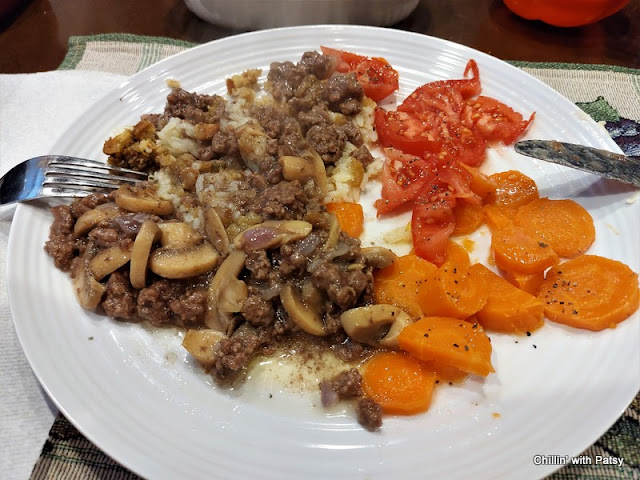 Posted by Patsy Irene (Chillin' with Patsy) at 5:38 PM