The Day of the Party, A Great Surprise

On Saturday, Sept. 10th it was 6:45 when Gibbs and I got up for the day. I was to find out later that he hadn’t been out yet so was letting Daddy, in particular, sleep in. 😊 I tried to be quiet as we went downstairs and I slid the door closed so as not to disturb our night owl. The place was pretty quiet but we did meet Katie over by the fire pit as she came down the porch steps.

Gibbs met Daisy and Dolly, two young but large Bouviers. They are beautiful dogs but when they started chasing Gibbs instead of greeting him cordially, they all became a bit over-anxious. Gibbs ran home and sat on the top step of our home and they then backed off. I don’t like that kind of greeting and by the way his little heart was pumping, I don’t think our little guy thought much of it either.

Daisy is a sweetheart, but Gibbs doesn't want to play with her. Dolly is the aggressive one so we are a bit more leery with her. Too bad, he was having a good time on Friday. Maybe they’ll get used to each other and so will I. 😊 Bill went to the house and was keeping company with the family while I stayed inside and wrote a blog post. I was very lax yesterday and didn’t even start one. With that done, I made a coffee, gave Gibbs a biscuit and went and joined them in the house.

It was lovely to meet the Bouvier parents, Jessie and Tim (Peter and Linda’s son). I don’t recall ever meeting Tim before but I’m sure I must have at one of the cousin reunions. Tom, Peter’s brother, and Karen also arrived last night with no new dog, to my knowledge. The vehicles that were here yesterday, including Black Beauty, were all moved back further in the field to make room for new arrivals today. It was beginning to look like a party was going on!

After bacon and eggs for lunch, Bill had a snooze and we walked over to join the group outside. Gibbs came too and since I’d put his bark collar on, he stayed very close to us, compared to yesterday. We sat with a group of people we didn’t know, all circled around the shade, and when conversation was at a standstill, even after I introduced ourselves, I returned to the Suite. May as well start my blog until things got hopping over there.

Today was a cloudy day to our surprise. The forecast was full sun but at least it was warm even with the breezes up here on the hilltop. 😊 Around 4:30, I returned and we were sitting around in a group when we first heard and then saw the parade of tractors coming in the lane. This was a special treat for Peter, his friends from the area drove in with 21 various tractors. What a hoot! We all loved it too.

They didn’t come to ‘party’ persay, nor to eat or drink with Peter but instead just a show of support and congratulations on his retirement. Then they left. Supper was prepared and set out on the deck, buffet style, and it was quite a spread. Veggies and dip, salads, pulled chicken and pork on buns. It was delicious, topped off with a variety of dessert squares. Jesse played and sang a few songs before it was dark enough and cool enough to start the fire. That was fun. I only got videos of Jesse and his friend playing so no pictures to add.

The fire was great, with a much bigger crowd tonight and I stayed until 9:15 when I left Bill and returned home to Gibbs.

He’d been alone, off and on, for a few hours. We walked around and over to the firepit where he said hello to many out-stretched hands. Everyone loves the little fur ball and he, in return, laps up the attention. It was a nice evening although the wind was a tad cool. Sitting close to the fire was a pre-requisite for me. 😊 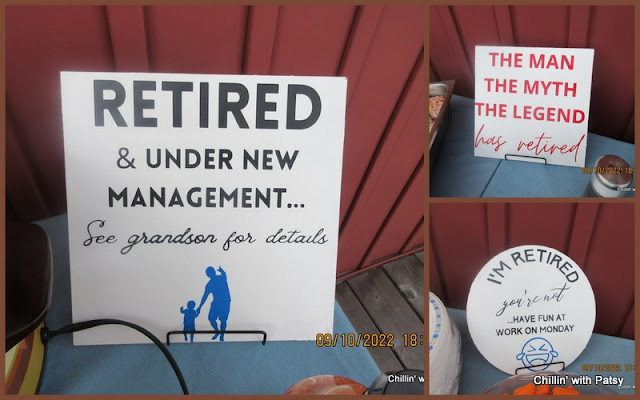 What a nice day! Thank you for your visit, I hope you enjoyed the party too!

Posted by Patsy Irene (Chillin' with Patsy) at 7:22 AM

Email ThisBlogThis!Share to TwitterShare to FacebookShare to Pinterest
Labels: The party and the surprise
Location: Cavan, ON L0A 1C0, Canada