A New Adventure, Peter’s Place for a Party

On Friday, Sept. 9th we were up by 7 and before 7:30 I drove to town to clean. We’d decided to just take our time and pull out when we were ready. We had a 3 ½ hour drive to Bill’s cousins for the weekend. I was in and out of the Mat in the hour and back home soon after 8:30.

Bill had dumped our black tank and brought a bladder full of water from the Acreage to top up the fresh. 45 gallons is more than we usually travel with but for this weekend, it was going to be good for us. We would be dry camping on the property with who knows how many others. Peter retired on Wed. Sept. 7th from working for Hydro One for 30+ years and Katie and Linda were hosting his party.♥ 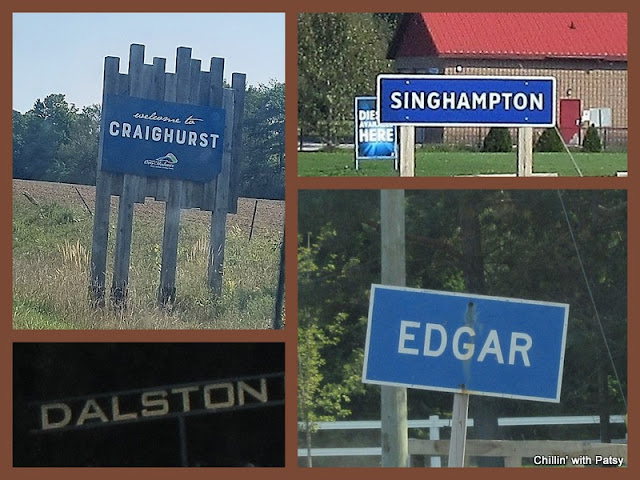 We Googled the best route because our GPS would take us on major highways, which we wanted to avoid on a Friday. Our friend, Duncan, helped us out by giving us a trip suggestion and it was a wonderful drive! Lots of small towns that I’ve never heard of but thoroughly enjoyed touring through. We arrived at Peter and Linda’s beautiful home up on the highest point in the county. That was obvious when we saw the views all around!

Peter gave us options of where to park our 40’ Suite and we chose one in front of the shops with a 15-amp hookup. 😉 We weren’t expecting any plug-ins at all so this was a real bonus. The greetings we received from Peter, Linda and their daughter, Katie, were the icing on the cake, telling us we made the absolute right decision in coming for the party. Peter is one of ‘our’ favourite cousins, with a lot in common, so we were thrilled to be in attendance.

The rest of the afternoon was just relaxing, catching up and enjoying the surroundings. Gibbs was in his glory with new doggy friends. Two large Sheep-a-doodles (we were looking at minis of these before we found Gibbs) and two Shit-zus (?) and they all got along wonderfully. It was so nice to just let them wander, no leashes required. 😊

When I was thinking about asking Peter for use of his bbq for our supper, he beat me to it by saying Linda was picking up pizzas for supper for everyone. Again, totally unexpected but gratefully accepted. We joined them on the patio with Katie, Jesse, 8 mth old Rebel, friends, Matt and Linda. The conversation and meal were great. What a treat! It was cooling down so I slipped into jeans and a hoody before we all gathered at the huge firepit.

The girls were busy with a surprise of some sort for Peter so after enjoying the heat, the company of one of the little dogs on my lap and the beautiful moon, I left the guys and went to bed with Gibbs. Because he wanders in the dark, he was put inside earlier. There are coyotes in the area so he was in a better place in the Suite. 😊 He may not have agreed!

This was a great day from beginning to end. Not sure who else will arrive tomorrow, I know others came after I came to bed but I’ll meet them later.

Posted by Patsy Irene (Chillin' with Patsy) at 8:35 AM