Getting Shopping Out of the Way, Ending with a Campfire

On Saturday, Sept. 3rd I was up and off to work before Bill left for the flying field. With Monday being a holiday, I decided to leave the laundry until then, regardless of weather. Today, I wanted to clean in town and then carry on to Hanover for groceries. 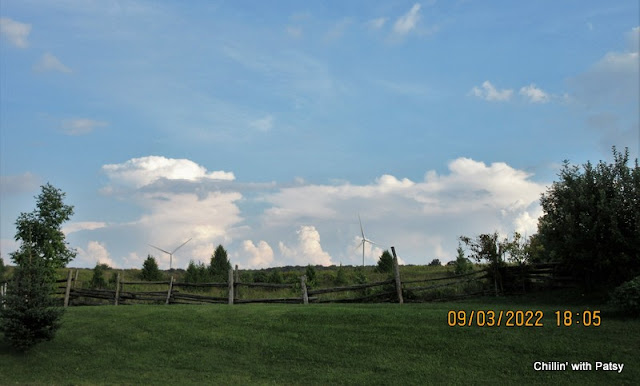 We have a set budget for food for a month and it is actually probably lower than many of you have BUT it works well for us. Bill transfers the amount from our two pensions at the beginning of each month and I just pick away at it each time I shop. I used to fret about how much I spent nipping here and there to pick stuff up, not being the financial planner of the household. Now, it is so easy for me! 😊

After cleaning the Mat, I stopped at a couple of garage sales but only found a couple of items, one being a small garden stone. I’m keeping my eyes open for bird feeders, since mine all deteriorated so badly, they got pitched, except for one that is holding on with its final ‘legs’. My finch feeder is metal and is the best one ever. No luck at the sales for any but maybe in the spring.

I drove to the Dollarama first and stocked up on cards for the birthdays in the not-so-distant future. Then Walmart for the big stock up. I did nip into Grant’s Independent for my 10% fat Liberte yogourt. It was a surprise to find it on sale so I bought 2. The cost at the self-checkout for my cartful was more than I expected but I got some good deals. For example - pork ribs, 2 – 2 packs for $26. That’s a great price for 4 meals!

It took longer than I thought, it was busy being a long weekend. Every body and his aunt were out. 😊 I didn’t put Gibbs’ collar on him before I left and I never heard a peep as I drove up. It was a good test when Bill returned home from the field around 1 and he passed with flying colours. Only a couple of ‘woofs’ and he listened to me, just watching for Daddy to get parked. ♥ He barked once when I opened the door for him to get meet him but stopped right away. Wow!

No collar on him all day and not a single bark that was worth admonishing anymore than ‘no bark, good boy’. We each did our own thing for the afternoon, Bill worked on a plane down at the Hangar and I worked on finishing my puzzle.

That one didn’t take long! I’ll have to decide which 1000 pc. one I can fit best on my table. Or maybe I’ll do something else out there. 😊 It was a very humid day, even though the temperature reached 28C/82F, it felt a lot hotter than that. I turned the a/c on before lunch and was grateful that I did.

Just before supper, cheese and bacon burgers on the Weber, I turned it off, feeling the breeze had picked up and sky had clouded over. When Bill was grilling, he saw a flock of geese flying overhead. That's the first we've seen them since July.

We went to the Acreage for a campfire and other than being eaten alive by mosquitoes for about an hour and a half, it was a nice evening. Strange, we thought they’d have petered out by this time of the season. ☹

It was a warm evening though and Gibbs kept us entertained. We put his collar on just before we left the house since he barks a lot when approaching their laneway.

We were home by 10 and I read my book until I kept dropping off. I picked up the book Dog Tags again, that I started over a month ago, and this time got right into it, zipping through the story. It is quite good and entertaining with comical quips throughout.

It was a great day! Thank you for stopping by.