The Good Days Continue to Stack Up

On Tuesday, Sept. 20th, I didn’t need to rush into town for cleaning. I needed to go but because there isn’t a commitment to M’s at 9:30, I could go when I wanted. Gibbs and I came down to say goodbye to Bill at 7 and then at 7:45, I left as well after a cup of tea.

It was in fair condition but the floors did need a good washing and the dryer lint trays needed to be emptied. That’s after just one day so I’m glad I went in. when I left there an hour later, I stopped at Foodland for some butter and shredded cheese. I had enough change on me with the thought that I’d give Black Beauty a treat and take her through the car wash. I’m sure I was paranoid but it didn’t look like she could fit so no treat today. ☹

Back home, I sat with Gibbs, and had some cereal with a banana. Today, I cleaned out some of those ‘dreaded half filled/well dated’ jars and containers of stuff that we haven’t eaten. I don’t mean leftovers, I mean the jars with a bit of that choke cherry jam (which is like syrup now), chip dip that I wouldn’t trust and a container of bean salad that was in the very back. No thanks!

I had about a cup of pork liquid from the ribs and took Donna’s suggestion to add salt (if it needed it) and drink it. She makes her own broth all the time and swears by it for good health, so because it had the rib spices in it, I warmed it up and drank it. Hey! That was tasty! I’ll remember that. 😊 It is good for the lining of the gut, strengthening bones as well as the immune system, improve brain health (I need that!) and remineralizes our teeth! There’s a health tip for you in case you didn't know it.

We have leftover taco pie for supper so I don’t have to plan anything there so instead, I made a coffee and sat at the book cupboard. I removed quite a few cd’s that are not favourites to listen to when I’m home alone, as well as sorted through the books we are most likely to take for reading this winter. I have quite a few from the Durham book ‘sale’ that are different than my norm so have included those and I kept the mysteries by our favourite authors that Bill hasn’t read.

That made a difference and now they are neater too instead of just jammed in there. The ones we’re not taking are in the Bunky and I will putter through those next summer. 😊 Any that I didn’t think Bill will have as much interest in, if I’ve read them, went in the donation bag.

While out there, I pulled everything down from the loft shelf and sorted through the sheets. They’ve been washed but there are way too many for what we’ll use. There are even a couple of queen sets that although they fit the pullout sofa bed, one set is all I’ll need. Then Gibbs and I walked to the mail box only to find the carrier has not been. Strange and frustrating, since she usually is here between 12:30 and 2.

Bill has left a note for her regarding Safe Drops giving permission to do so if we’re not here so we want her to get it asap. Yesterday was a ‘grief’ holiday for the Queen but I expected it to go today so I called to check. It was 3:30. After a reasonable explanation of a route alteration and an apology, I was satisfied. Within 30 minutes, I heard her stop at the end of the lane. 😊 We walked back and got our mail. 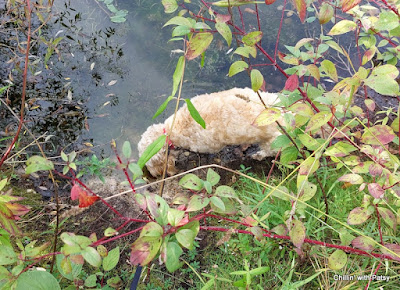 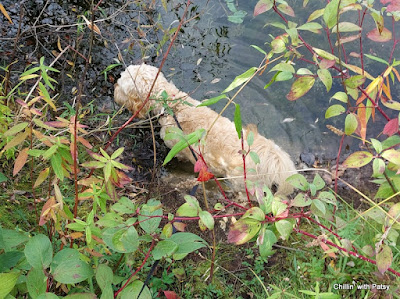 Gibbs wanted to walk so we went into our back field and scared the turtles before he almost dove into the pond. Good grief! What a goof! He was wet (& dirty) up to his ‘knees’ when I finally steered him back towards home. He ended up going in to our pump sink by the Bunky to get his feet clean. After a few games on the grass of fetch the toy, he was mostly dry and we moved inside. 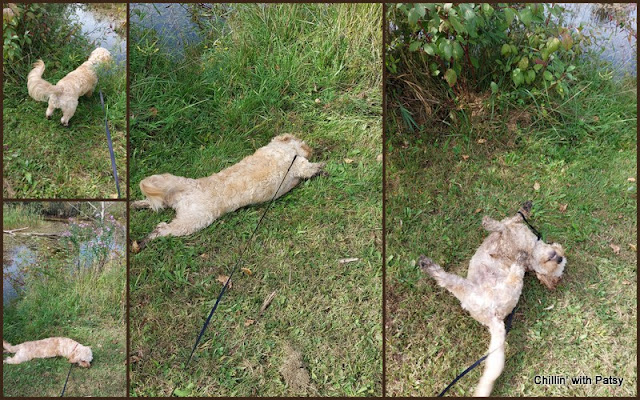 We’d expected Bill early from his phone call but that didn’t happen. I was ready for a cup of tea and it wasn’t until then that I thought ‘I hope things are okay’. I made my tea and decided what to have with our pie for supper. I also made two dishes of Jell-o this morning for our company tomorrow night. They are providing the main course (yes, again ♥) so I’ll provide a dessert. I’ll add whipping cream and blend it to ‘spice’ it up.

Bill was home around 4:30 and he went right out to cut the front field. I took the opportunity to take Ptooties back into Durham since I didn’t realize we needed bread earlier and Patty asked if I could find a couple of limes. Gibbs stayed outside on his rope leash keeping an eye on the Suite for us. The lineup was long at Foodland and it wasn’t until I was almost home that I realized I’d forgotten to fill the water bottle. Duh! Oh well, another day.

I made up a box of stove top stuffing to have along side our pie and corn. I cut up a couple of small tomatoes from the garden and that meal was almost better than last night. 😊 Bill made his sandwich for tomorrow, loaded the dishwasher and washed the few large dishes. The sun is setting early, it’s only 6:30 and it is already low in the west sky. Our days are shrinking! This was a good one though, no complaints here. I hope you don’t have any either!

Posted by Patsy Irene (Chillin' with Patsy) at 6:56 AM