Ending the Week with a Bang

On Friday, Jan. 29th we were not only at the end of a work week, we were fast approaching the end of the month. Bill left for work at 6:30 and I was up and out the door before 8. There was some snow to clear off Ptooties but again, it was light enough that it wasn’t a chore. Some scraping on the windshield and I was on my way.

Clear sailing all the way to Durham with track bare and then completely bare roads. I stuck to the main ones again. The laundromat had one customer. Guess who it was? Remember on Wednesday, the non-speaking man who did his wash and left 2 t-shirts in the machine? I’d hung them up to be dried on a cart and someone had tossed them on the bench. 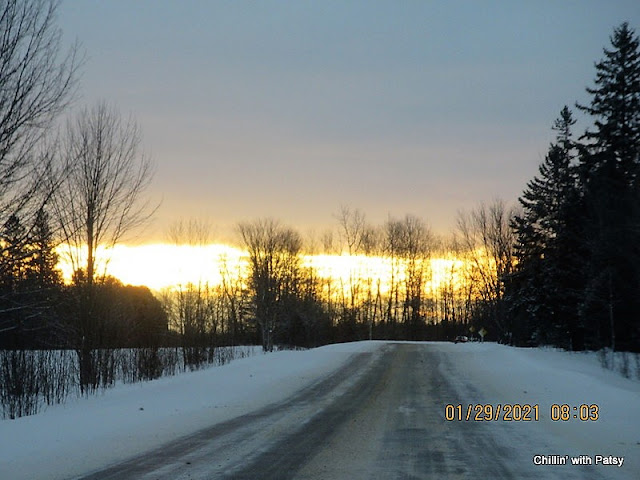 When I arrived, he wasn’t there, so I put them in the Lost and Found. I told him about them so he was happy to get them back, although he never missed them. 😊 He and his girlfriend were still there waiting for the wash to finish when I was done with the floors and shoveling the front walk. There was no salt in the back room since I’d emptied the pail on Wednesday, so I texted Jamie as an update. 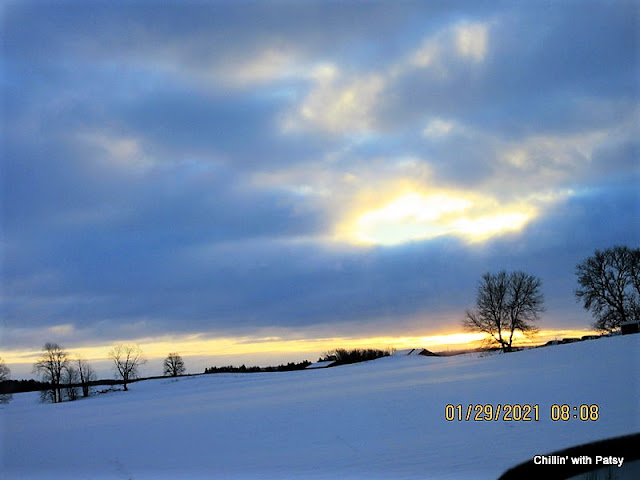 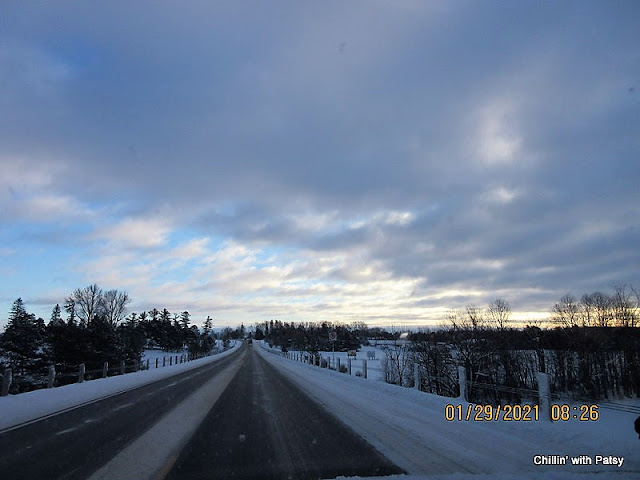 I got our water jug filled in Durham and then drove to Hanover for a stop at Walmart. I didn’t do too badly today. The store was busy, being a Friday, but still an easy checkout. I had 4 items on my list and came out with 6 things. Pretty good, eh? I turned left at Hanover and drove back to Neustadt, starting work there at 11:30. We stopped for lunch and I carried on in the bathroom until 1:30.

Bill had done a lot of the tub cleanup, using a putty knife to gently scrape the plastic up where the grout had stuck to it. Better him than me, he has the patience of Job with his projects. When he finished, I took over and cleaned the wall tiles, tub, sinks, toilet, counter tops and cupboards and then moved on to the baseboard. Lastly, I washed the door on both sides and vacuumed the floor once more.

I left soon after Billy reported my hours to Mike and Bill told me they headed out soon after. It was a straight forward drive with no interruptions and no weather to deal with. I was sure feeling achy last night when I went to bed but was happy that my body was functioning pretty much normal this morning. 😊 By the time, I arrived home and got groceries put away, I was feeling that I’d worked a full day.

Yesterday, I had an email from the library that my book was ready for pick up so after Bill texted that he was leaving Billy’s, I walked down and made the curbside pickup. She saw me coming so I didn’t have to make the phone call. So clandestine! Ha ha She opened the door and had my book sitting on a rolling cart. Lordy oh Lordy, what is the world coming to? 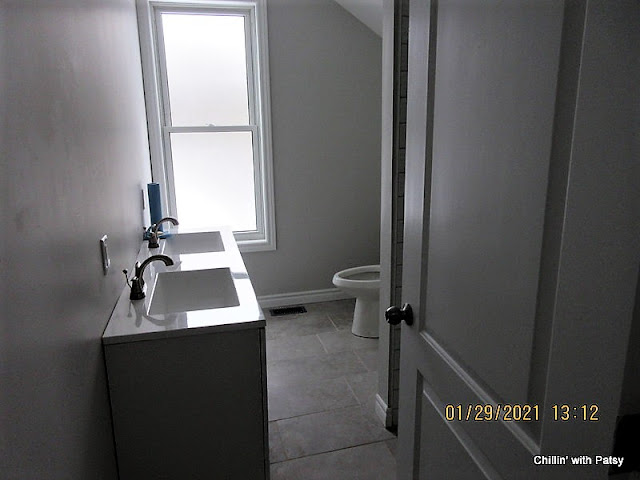 I walked back across the bridge and marveled at the number of snowmobilers in town. Looks like they all stopped at one place across the road from us to gather and then took off for the trails. I’m sure they’re having a good time enjoying the winter snowfall. I crossed the street to home and Bill wasn’t too much later coming in the drive.

We’d hoped for Marty’s for supper again, why not? But I couldn’t get through on the phone. I tried for half hour from when they opened at 4 and then hopped in the shower. I was pleased when I came out that Bill was dressing to walk over and place our order. It was quicker then continually calling to get through. Everyone wants to take advantage of their last weekend as our supper may not be ready until 7:30! We’ll wait, not a big deal. 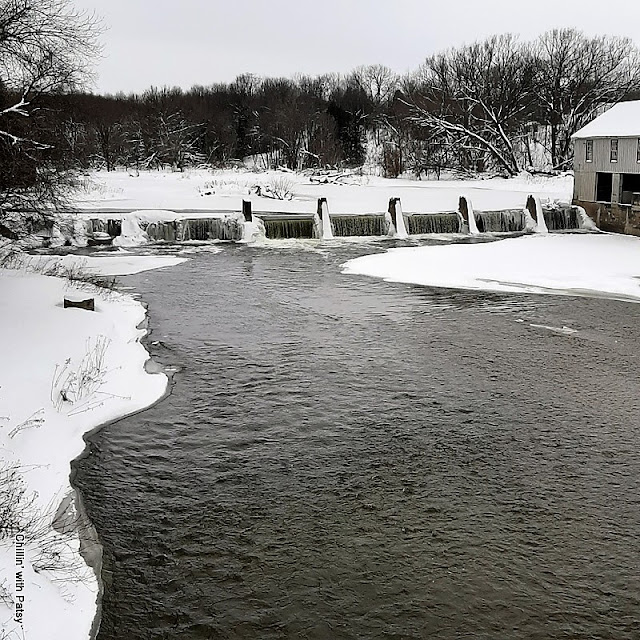 In the meantime, Bill got paid and I got paid from Mike, by email. So, good news. We also got an email from Peggy at CanAm with our invoice for the work done on the Suite since the spring. Not so good news. We were not quite ready for the shock. Yes, it was a lot more than we expected but at least some was covered by the extended warranty. What do you do? It’s our home and now things are done, including our new flooring.

That was the bang that ended our day. Hmmm, that sets us a step back after us doing so well but it is what it is and we’ll pay the bill. Bill got a call from Marty’s at 6:45 saying his order would be ready in a few minutes so he walked across the street. I appreciated him doing the pick up today, old achy bones here had wet hair. 😊 Bill had one of his usual orders, fish and chips and I had the hot roast beef sandwich with a baked potato. I’m still flabbergasted by their large meals.

Neither of us could finish all of our meal but Bill doesn’t like leftover fries so I was the only one that put away leftovers for another night. Again, there is enough roast beef to share with him. We’ve heard that the new owners are keeping everything the same PLUS they have hired Marty’s son (at least I believe that is what Susan said) to be their chef. Not much should be different but we’ll find out!

We took care of dishes and since it was after 7:30 when we finished, I didn’t bother with the tail end of Jeopardy. I crawled up on the bed, not even into the publishing of this blog. Bill went down to watch a new movie in the games room and I stayed upstairs with my book. The book I picked up was another suggestion, kind of, from Bridgette. The Hillbilly Ellegy by J.D. Vance but I only managed 2 chapters before I was closing things up for the night.

Since I hadn’t gotten very far at all into the John Grisham book, it can wait. I did hear Bill come up at 10 and we both dropped off pretty quickly. It was another good day and even though I’m a sucker for punishment, going back to do more cleaning, it felt great to complete the job, for now. I hope Mike is pleased with the cleanup. (I guess he must be, since he paid me. 😆)

Thank you for taking the time to pop by! Your comments are always welcome.

Posted by Patsy Irene (Chillin' with Patsy) at 8:00 AM

Email ThisBlogThis!Share to TwitterShare to FacebookShare to Pinterest
Labels: end of a good week
Location: Paisley, ON, Canada