On Sunday, Jan. 10th we began with a lazy morning. There had been a light skiff of new snow that fell overnight but it wasn't much. I sorted the laundry and we went down for our coffee and tea around 8:15 or so. Just a couple of loads again today so they will be done by noon hour. No, I wasn’t ambitious enough to go for a walk first thing. Hopefully my self-motivated push will get me out the door later today. We read blogs and Googled things online until the loads were finished.

When the last load was folded and put away, we had our brunch. We didn’t feel like eggs and bacon today so we made separate things. With different tastes and not wanting a big meal at noon, we’re quite happy to fend for ourselves. Maybe that is weird for some of you, but it works for us. So, after eating Bill decided to make his lunch for work tomorrow and be a jump ahead of the chore tonight.

He was into a project with his new battery charger today so I stayed out of his way. God knows I haven’t a clue what all the wires and numbers etc. mean! I could read or crochet but instead I decided to go back to my puzzle in the garage. I’m in the mood so it’s a good time to carry on with it. I have a box full to choose from when this one is done although they don’t all have to be done this winter. 😊

Around 1:30, the puzzle was done. Good job, Patsy! It’s a good thing because the light really wasn’t great and the last 8 solid colour pieces went in the only spots left to go in! I was feeling tired so came upstairs where Bill was still working on his charger and batteries. I curled up on the bed for a snooze and he joined me at one point. It wasn’t a long sleep for me, as I was wide awake 15 minutes later looking at the ceiling. I didn’t want to disturb him unnecessarily.

At 3:30, I wrestled myself up and went for my walk. I’m glad I pushed myself to go because it was a mild 0C/32F with very little to no wind at all. The walk was about 45 minutes down along the Saugeen, through the campground and back up to the back streets (east) of the town. At one point I met another walker. She was taking what I assume to be an Irish setter or spaniel of sorts for a walk (or visa versa). What a beautiful dog. He was a pup, she said, but that pup would have no part of me petting him. I wish I’d got a picture of him.

Back home, I poured myself a bit of Disaronno and joined Bill upstairs. He’d had his shower and asked if I would play pedicurist for him. He has a hard time reaching his toes and it is surprisingly a small chore that I don’t mind. I give him a hard time when he asks but really, why not? 😊 So, with his tootsies and nails in as tip top shape as I can get them, I went downstairs to make some dessert. Unfortunately, it won’t be set enough for tonight. I guess I should have done it before sitting in the 'salon' chair.

We were finally having the last of the chili and the last of the spaghetti for supper. I made up a salad to have as a side dish. I suppose I should have made some tea biscuits while I was down there! I’m back upstairs after supper and dishes and I’m glad we’re done with the leftovers. 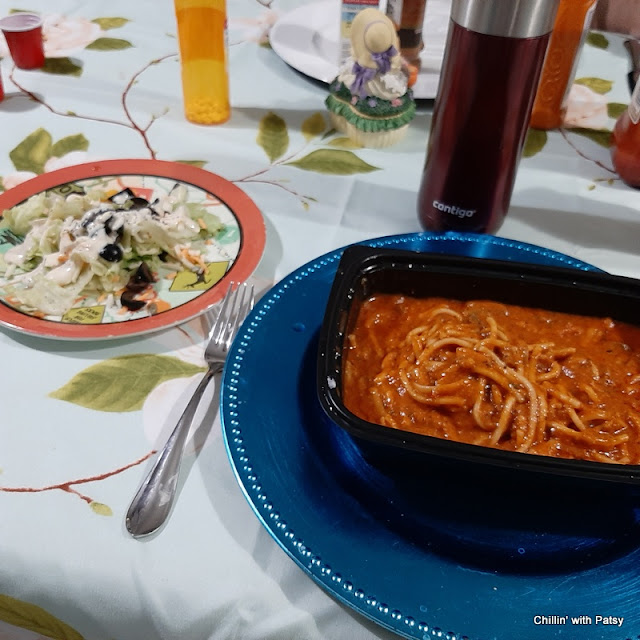 I think Bill enjoyed his chili, but I only ate part of the leftover spaghetti and that was enough. The rest fed the garbage bin. The good news is that the custard dessert was set enough so we could eat it after all.

Bill finished watching a movie downstairs until 8 pm and I came up after dishes to finish my post and ‘chill out'. This was a nice quiet day. We managed to get laundry done and a few other things we both wanted to do. I’m happy I got out for my walk; the fresh air was wonderful! I hope you’ve enjoyed your Sunday too.

Thank you for popping around.

Email ThisBlogThis!Share to TwitterShare to FacebookShare to Pinterest
Labels: Another quiet Sunday
Location: Paisley, ON, Canada