On Saturday, Jan. 9th we woke and got up around 8. You’d think I would have had a great sleep but it was disturbed by a stupid dream that had Bill shaking me awake. I slept from 9:30 until our phone call at 11:30. I still had my ear plugs in so it was a good thing Bill answered and chatted with the new Mom. Well, not ‘new’, but a Mom again. 😊 If you’ve followed us on FB and/or read my previous blog, you’ll know by now that Hadley Rose and Jess are both doing fine. We are so proud of that little millionaire family.

Instead of having my tea right away, I dressed for my walk. The sun was coming up in the eastern sky, having just risen a few minutes before. Several people have reported that the days are getting longer, just by mere minutes but longer still. I need to pay more attention as I haven't noticed yet. I walked down past the Post Office and confirmed that they were not open on Saturday morning. Some towns offer that service, I know Durham does. Paisley doesn’t, although you can get into where the personal mail boxes are.

I carried on out of town and walked past the Paisley sign, crossed and followed the back streets to Victoria, checked out the Book Barn box and followed the trail to the trestle train bridge. Time for a selfie but I didn’t walk on the bridge this morning. I was the only one out and about so early. It was very cold though, -8C/18F, so I had made sure to wear a scarf, my hat, my head wrap over my ears plus my new mitten gloves.

It was about a 40-minute walk and it was really nice out there. I’m glad I followed my instinct to go early in case I got lazy in the afternoon. When I got back, I made my tea and sat upstairs with Bill while I drank it. Bill put a notification out on Facebook about our wonderful news and I had to comment that Hadley will be celebrating the birthday with Elvis. 😊 ♪♫

At 11:30, I went downstairs and started brunch. Poached eggs and peameal bacon on toast. We wanted to eat enough fulfilling stuff to get us through until supper. I took a small tenderloin roast out of the freezer to thaw. After eating and dishes, I had my shower and then eventually moved downstairs to the garage to work on the puzzle. With the sun shining in down there it would give me lots of light to play. 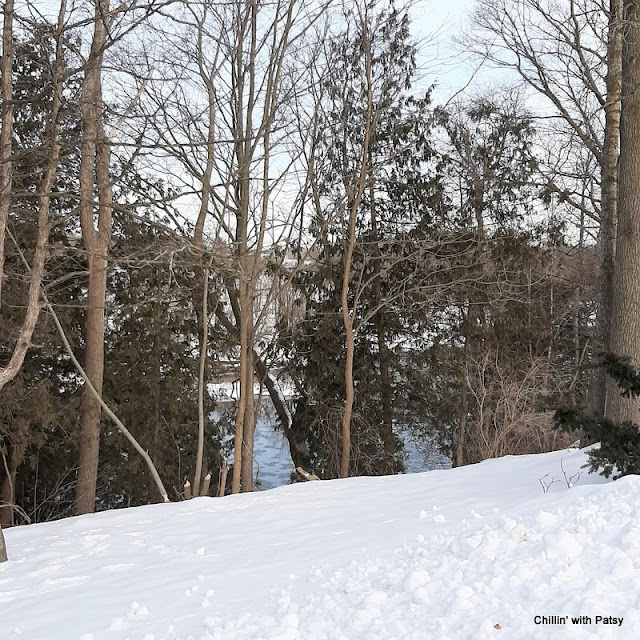 I worked away from 2 until 3:30 when the light faded and my solid pieces were starting to all look the same. I do enjoy working on it though and accomplished a fair bit in one corner. I forgot to tell you that at the Book Barn I found two books, one that Bill might enjoy and one for me. While at the Book Barn box, I quickly Googled on my phone the title of his so thought it was worth a try. 😊

When I came upstairs from working on the puzzle, I played my Scrabble Go games. I have 3 duplicates, meaning 2 games each for 3 my opponents and that just takes up too much time and data. When one of the two games end, I will delete it so we’re just playing one. Wes and Susan had been out for the afternoon so when I went down before 5 to put the roast in Madame IP, they were telling me about the adventure they had. Not my story to tell but maybe one day, they will take us too!

The roast will take 45 minutes, not including the initial time for building up pressure (I’m guessing, since the centre is still frozen), so I came upstairs with Bill while it cooked. I’d added a couple of potatoes and a yam (sweet potato) around the roast as well. Ooops, darn! I forgot an onion this time. No matter, I went down with just a couple of minutes left to cook and gave it a Natural Release for 10 minutes before manually releasing the steam.

While that was going on, I cooked some frozen butternut squash for me, fried some leftover mushrooms and cooked some corn for Bill. When all was done and removed from the IP, I made gravy with the drippings. Yummers! This was a Sunday night supper on a Saturday night. 😊 The roast was perfect and although we should have cut it a bit bigger from the tenderloin we bought, we’ll get a bit each for another night.

When dishes were cleaned up, we retired to our room. I worked on my blog and Bill gave me a tip for downloading pictures from my phone. It takes forever and because I forgot my camera on my walk this morning, all today’s pics were on my Samsung. Bill touched base with Wes and Susan about the new Hallmark movie that is on at 9 tonight and stretched out to read the new book I found for him. No word yet on what he thinks of it.

This was a good day and it will prove to be either a night of reading or watching a movie for me. Not sure yet, I have an hour to decide.

Thank you for your visit, I enjoy having you pop in!