Two in a Row, When Life Deals You Lemons

On Saturday, Jan. 23rd, Bill was up ahead of me. Said he just couldn’t lay there any longer but he had a pretty good sleep. It is unusual when my hubby can report that so I was pleased. I’d been dreaming, stupid dreams, but slept well as is my normal. I finished my book last night after supper and if you haven’t read it, it is a good read. The Jake Peony by Wayson Choy.

We went down for our morning brew and then just kind of lazed upstairs. Bill was watching the plows go through at 6:30 and the sidewalk plow blowing the snow into the dump trucks closer to 9. There was a lot of snow! I know we used to get hit in London too, and had challenges of where to blow it after each dumping. We had neighbours on each side and across the street dealing with the same issue. Plus, some days, we had to be on our way to work at 7 am and Bill would shovel before we could get out of the laneway.

This is the best downtown cleanup I’ve ever seen, although I’ve never lived on main street before! It is impressive to watch. Wes and Eddie were outside cleaning the walkway and we saw Eddie cleaning his car off and shoveling around where he parks. Wes had told us yesterday that if we weren’t going anywhere this weekend, he would wait to get Jim, their plow guy, to come in on Sunday, after we got all the snow we're getting.

When I went down for a coffee, Susan said he was coming today instead and soon so Bill went out to move our vehicles out onto the road. The three of them stayed out until Jim came and left so they could put the cars back in the lane.

We aren’t supposed to get much more snow today or for the coming week so that should stay clear for a while. We got about 14 or 15” as could easily be seen on top of Black Beauty and Ptooties. 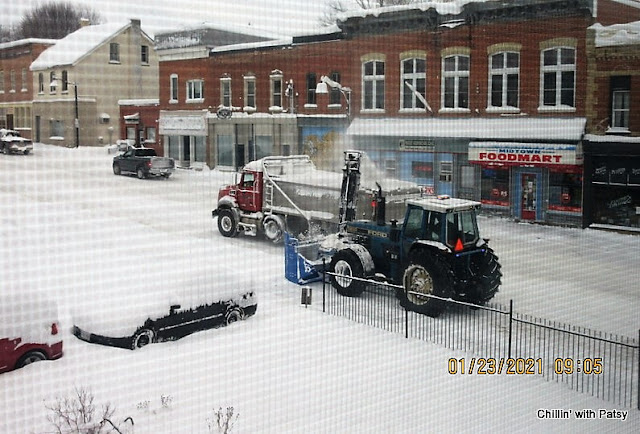 While Bill was outside, I began making a pie crust. I read on Marian’s post on FB that today was pie day so why not? I’d picked up a lemon meringue pie mix a while ago so today was a good day for it. I know it’s a sweet treat but I’m already off and walking beside the keto wagon so not going to dwell on it at this stage. 😊 I baked the two crusts and since I only had tin foil pie plates here, used those for the first time ever.

Around noon, we had our bacon and eggs and Bill worked on his laptop until Wes was ready for his help. All 4 of us were needed, all hands-on deck, to lift a large piece of ‘plexiglass’ up onto his platform for a solar furnace he is working on. It wasn’t heavy, it just needed all 4 corners set down onto the caulking at the same time.

In between putting things together, the filling and the meringue, after the crusts cooked and cooled, I worked on Betty Boop. It has been fun so far. I should have pushed myself to get out for a walk at some point, but I didn’t. That’s two lazy days in a row and I don’t like the habit that is forming. Tomorrow, I will definitely remedy that!

Wes and I were still trying to get some pictures of his and a few videos he’d taken sent off to a couple of friends. The videos were too large so he took photos instead and finally, after a few attempts and a few emails, we managed to get them sent off.

Bill was upstairs, snoozing and reading when I made my tea and moved into the garage again. I was losing the light so worked as much as I could on the puzzle before joining him.

I’ve started my next book, just barely. Orphan Train by Christina Baker Kline. At 4:45, I crawled up on the bed to get into the story a little more. I’ll keep you informed how it goes. 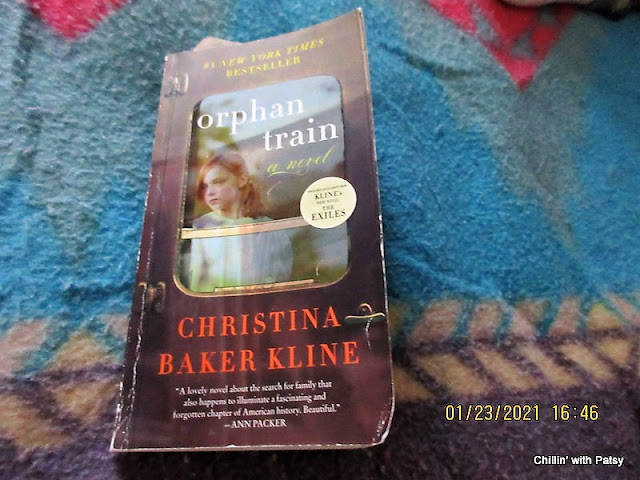 Supper would be easy, leftovers and the pie will be our dessert. For an hour, I got lost in the pages and smile to myself that I have another interesting start to a book.

We went down before 6 and I heated my quesadilla up in a fry pan and reheated the hamburger gravy and corn casserole in the microwave. Everything was very good, including the pie. I had to work at my crust this time, for some reason, but it tastes very good and we had no need to hide it under the edge of our plate. 😉

After dishes, we returned to our room. Bill went in to watch a movie at 9 with Wes and Susan and I hooked up my tv and watched The Fault in our Stars.

This was a very lazy day for me, except for the pie, physically lazy. I still enjoyed every bit of it. I hope yours was a wonderful Saturday as well.

Thank you for stopping by! All comments are very much appreciated if you wish to leave one. (Ps, it has started snowing again!)

Posted by Patsy Irene (Chillin' with Patsy) at 5:46 PM