I heard the alarm at 5:45 but dropped right off again on Monday, Jan. 18th. It was 10:30 pm when I closed my book and my eyes. Not sure about Bill, he was still reading. After kissing him goodbye this morning, I was unsuccessful at going back to sleep although I felt tired. I was up before 7 and out the door before 8. Bill had texted when he arrived at his jobsite to tell me that it was lightly snowing. His way of saying 'be careful', methinks. 😁

Ptooties was covered by the white stuff but I knew it would blow off and the windshield had nothing the wipers couldn’t handle. After sitting for a few minutes with her warming up, off we went to Durham. It feels good to get out on the highway with a purpose, listening to my tunes on Sirius XM. Right now it is the LOVE station which sounds corny but I know 98% of the songs and can sing along. I’m in love so why not? 💓💕

I was alone for almost the whole time at the Mat so had everything done when the first customer came in. It was the just the floors needed doing and she went out to her vehicle after loading two machines so that made my job even easier. She is a familiar elderly lady and we exchange pleasantries each time. When I left, I turned right out of the parking lot onto Saddler St. E. and thought of Mom. I went that way because there is another book box on the first street. It is the street that Rockwood Terrace is on. ☹

There were fewer books in this exchange box than the one in Paisley but I took the time to look for ones we might be interested in. I found 3, yay! and left my Twelve Tribes of Hattie for someone else. It was a good one about the tough life of a 17 yr. old black girl as she aged, with an ‘invisible’ husband and 12 children. Her challenges made me ever so grateful for the life I’ve lived so far. Choices were different for me when I became pregnant even though still young and unmarried at the time.

Then I drove home. There wasn’t really any precipitation to speak of and what there was, appeared more like rain. It wasn’t too cold of a day, -2C/28F to -1C/30F. Back at the house, I took my thermos of coffee upstairs, it was just past 10:30 so I’d made good time today with driving and cleaning.  I took the time to dust mop the floors in our room(s) and do some dusting as well as clean the bathroom sink & toilet. I had some pepperoni sticks, cheese and crackers with my fried egg for lunch. 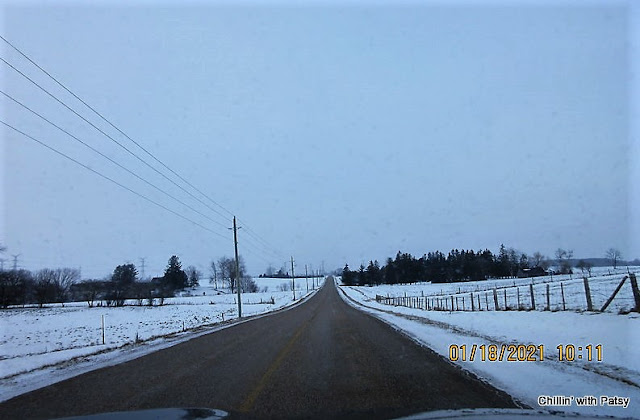 Before I went to bed last night, I felt the inkling of shingles so took a pill and sure enough woke up to them this morning. The pills help to ease the pain and lessen the duration rather than stave them off. I leave them on the bathroom sink so I remember to take one in the morning and one at night. Yes, my memory is that bad! I’m going to blame the shingles for my laziness today. Online, I checked for an email re my parcel delivery and when I got up out of my chair, I noticed FedEx out the window.

It was just before the noon hour so I went down to get the door when I saw him cross the street. These guys can be clueless. It says ‘side door’ on my order and it says ‘use side door’ on the front door of the house. He didn’t ring the bell and while I’m opening the side door, he has dropped the parcel at the front door behind the pillar and was out at the gate. I called out to him with instructions for next time (maybe he can’t read! Haha) and he said “okay, now I know!” Duh.

I was excited as it was my new leather jacket. Sadly, even though our sizing was measured so carefully, it is too tight around the chest and the arms are skin tight. Hmmm, makes me feel like an elephant! So, I packaged it up right away (well, almost) and requested a return/refund. It was an Amazon purchase but a 3rd party vendor. Still I knew there would be no problem. I re-ordered the next size up and hope like heck this one fits. I won’t be wearing it until spring/summer anyway so no rush.

Other than that, I love the jacket. It is a really soft leather and has a fleece zip-out hoody and 'dickie' (I think that is what it's called). Then I crawled up on our bed and put my head down. A headache was lingering and even though a walk would probably ‘ease my pain’ again, I didn’t feel up to it at all. I’ve been reading this Greg Isles story and can’t believe I was undecided about trying his books. Wow, it has me flipping pages like crazy and I’m halfway through already. I guess we shouldn’t judge a book by…….haha you know. 😊

I made a tea and unlocked the door downstairs around 4 as I knew Bill would be along within half hour. When he came upstairs, I showed him my jacket and then repackaged it for return. He agrees, too snug for long sleeves under it if I needed it. He curled up on the bed for his snooze, and dropped right off. He was tired after not having a good night’s sleep. I just hope he doesn’t ruin tonight’s rest. It’s a vicious circle. I couldn’t drop off earlier for the life of me so ended up reading more.

We went down before 6 for supper. Tonight, mashed potatoes with hamburger and onion gravy with vegetables. Squash for me and corn for Bill. I didn’t make anymore dessert so he’ll have to settle for a cupcake or nothing tonight. After dishes and making his lunch, we retired to our room. We will go down to the games room and watch 9-1-1 together at 8. It feels warm in there tonight; we watched NCIS and ate our supper out there for a change.

There was a light, wet snow falling as the sky darkened. Bill said we were expecting a couple of centimeters tonight which isn’t much at all. The car is there if he wishes to take it tomorrow.

This was a good day, even though a semi-lazy one for me. Thank you for stopping by.