Tuesday – Not the Only Thing Coming Down

On Tuesday, Jan. 26th I actually woke up on my own to say goodbye to Bill. It was a strange night. I turned off my light around 10:30 when I finished my book. I dropped off quickly and easily to sleep, obviously a deep sleep. It seemed like hours later when I woke up abruptly from a dream and the light was on. A peek out of one eye told me that Bill was still reading so it couldn’t be that late. I knew he was focused on finishing his book too. (He told me later that it was 1 am when he finished) 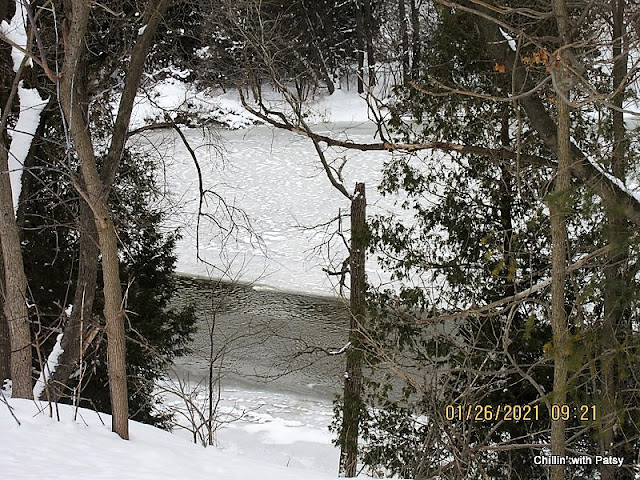 I did that at least one other time, abrupt wake up from a dream (of which I only remember Bridgette was in it with me) but this time I woke up to darkness. Bill was still sound asleep so it wasn’t time to get up. Each time, I wondered if I was too much awake to go back to sleep. Apparently not as I dropped off again. After Bill left at 6:30, I got comfy for more of the same sleep and it must have happened because when I woke it was 7:45.

Good thing it wasn’t a work day or everything would be later than my normal. 😊 I went down for my tea after making the bed and mentally making a list of what to do today. I read blogs and once caught up on those, dressed for my walk. It was just after 9 when I left the house. No ski poles today but I wore my high boots and grippers for safely and warmth. It was a cool morning but mainly because of the wind. The flags were blowing and the wind was making the -10C/14F feel much colder. 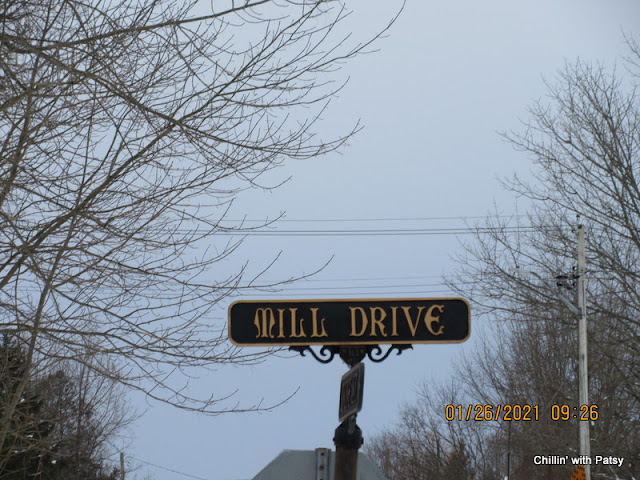 I had my warm scarf so had it tucked up around my chinny-chin-chin and my hood was up and down a couple of times. Soon I warmed up and didn’t need either as much. I walked towards the Grist Mill this morning, along Mill Drive. It was interesting to see the Teeswater River partially frozen, as I showed you yesterday at the dam. Further along, where the river’s depth increased, the water was flowing freely.

I wasn’t sure if I was going to walk on the trestle bridge today so at the Mill, I turned onto Wellington Street, to a section that I’d not followed all the way before. I’m surprising myself that I still haven’t been on every Paisley street but enjoying the adventure with each new turn. This one took me along the far reaches of the west corner and back up Balaklava Street, one over from the school, where I could hear children playing. Recess already?


When I came back up I turned onto the trail that crosses Victoria St. and followed it to the corner of Alma St. where the Book Barn is. No new books, darn, but it was nice to see that many of the ones we dropped off were gone. 😊 I decided to carry on the trail to the trestle bridge after all as I wanted to see where the Teeswater River began to ice up. I didn’t have to go far across the bridge to see and get my picture before I turned back around. Skidoos had made tracks across many times.

I made one more turn from Mill Drive onto Inkerman to Queen St. S and followed it home. I have included my town map (no legend, sorry) in case you are interested where I walk. I realize that I mention streets you have no clue what I’m talking about, so this will give you an idea and a better picture. Besides, one day when we aren’t here any longer, I myself will wonder where I was walking and what landmarks I saw.


Back at the house, I informed Susan and Wes that I was expecting a FedEx parcel just in case they noticed someone coming up the walk or in case the driver found a brain and rings the doorbell. Sorry, did I say that out loud? I made myself a ham, cheese and mushroom quesadilla for lunch with my coffee and wow, was that ever good! 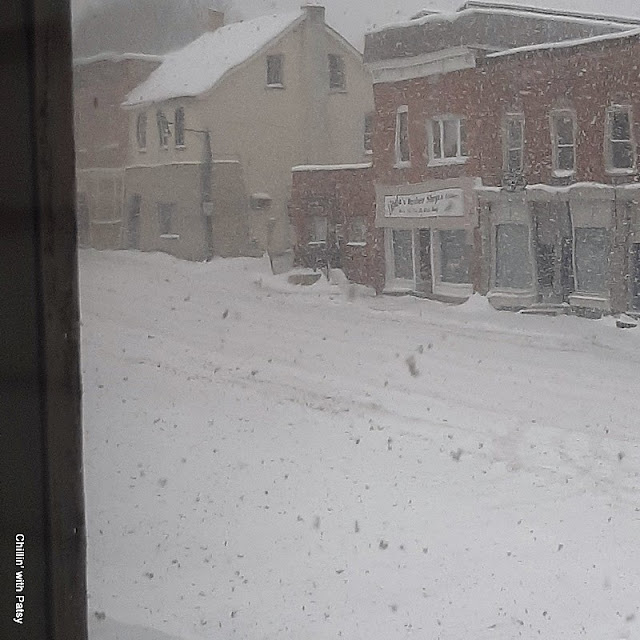 At some point, I had my shower and took the time to give myself a Covid-19 haircut. All in the safety of our own bathroom. No mask required. My hair was really growing, which never happens to me, but even though in pretty good ‘health’ and not so wispy at the ends, it needed to be trimmed. 2 ½” was what ended up coming off and I think it is pretty straight. I’ll get Bill to double check the back for me tonight.

It looks neater and feels good. I took the time while it was drying to dust mop the floors in our room(s). Removing things from under the bed and other objects that are easily moved takes the most time but it all got a good cleaning. After doing up the morning dishes, I went out to the garage and did another big section of Betty’s puzzle. She is almost finished, one more day and Wes can do his thing to frame it for Susan.

The snow started this morning around 11 so I’m glad I got out for my walk when I did. Not that I couldn’t walk when it’s snowing, I could. It has stopped and started through the whole rest of the afternoon and now as I’m in our room, it is big white flakes coming down coating everything with another layer of 2 – 3”. Bill is on his way so I hope he takes his time on the short drive from Billy’s farm.

For supper, Bill had a different idea than I did but he’s the working man today, so I made pancakes to go along with the mini sausages I’d thawed. I’d taken two packs out of the freezer because one had been in there for a while. You know how things get shoved to the back? Anyway, we had a lot of meat and just a few flapjacks. With butter, maple syrup and some choke cherry syrup, they were good. No dessert necessary tonight, good thing, I didn't have any prepared.

After dishes, we watched a favourite episode of NCIS, a rerun, then at 8 watched a new episode in the theatre room with Wes and Susan. It was a good one, revealing a few more things about some of the characters. Bill had his shower when we came back into our room and I worked on my blog. I’m yawning so not sure it will get finished tonight or not.

This was a busy enough day, all in all. I hope you enjoyed yours. Thank you for stopping in.

Posted by Patsy Irene (Chillin' with Patsy) at 9:23 PM

Email ThisBlogThis!Share to TwitterShare to FacebookShare to Pinterest
Labels: Tuesday and snowfall
Location: Paisley, ON, Canada