Profitable Hour at the Mat, Getting Used to Winter Travel, Sunshine Peekaboos

On Wednesday, Jan. 27th there was nothing unusual about the start of our day. Bill was up and out the door by 6:30, texting me after a few minutes to inform me that the plows had been down the highway and it was snowing lightly. I knew I was going to be brave today and not even think about whether I was going to work or not. I was going. 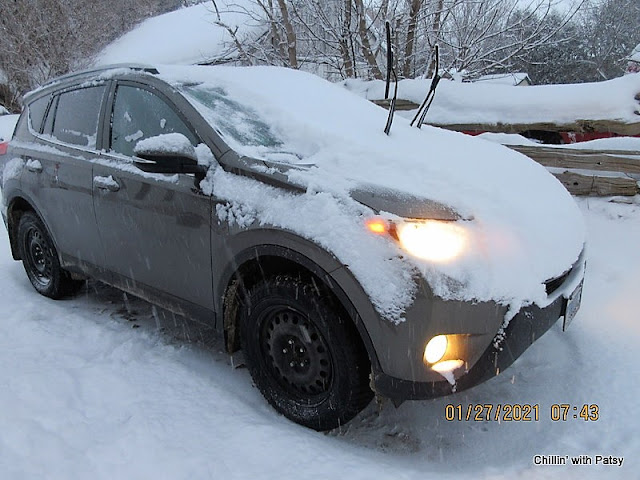 Cleaning the car off before I left at 7:50 was the biggest chore. We’d received a dumping again yesterday and a bit overnight so Ptooties was blanketed with another 3 to 4”. I’m very sheltered where I park but sometimes that means a lot of snow blows in there and has no where to go so………..dumps on the roof. 😊 It was light and fluffy so it only took a few minutes to clear.

Big flakes were coming down and the roads were snow covered to track bare. I just kept my speed at 80km and it didn’t seem to impede anyone else. Eventually, the lanes were 90% clear so I could increase to 90km/hr. I didn’t even try going by way of Concession 8, it looked messy, but stayed on the highway and went through Walkerton, then Hanover on the way to Durham.

The fuel gauge was just above ½ so I pulled into the ‘Pay at the Pump’ tank (there are only 4) at the Pioneer rather than the ones where you have to go inside to pay and topped her up. Next time, I should be eligible for .07¢ off with the Journie points card. I think. Gas prices were $1.08/litre, slowly getting up there but still better than it used to be. I drove across to the Mat of which the lot had been cleaned out. There was someone’s laundry in a machine when I arrived but the Mat looked clean. 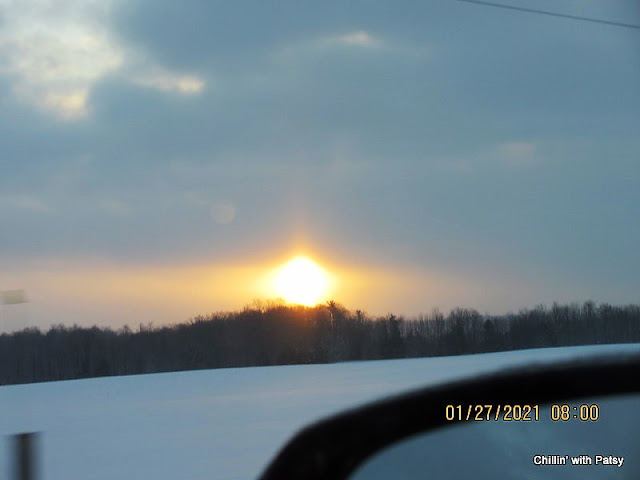 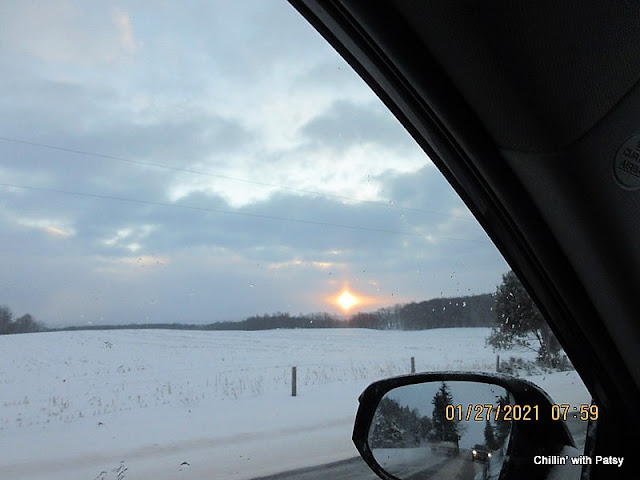 A non-speaking man retrieved his clothes in a cardboard box (unknowingly leaving 2 t-shirts inside) and left without a peep. Fine by me. I hung the shirts on one of the carts to dry and hope he returns for them. No matter their condition, he looked like he needs them. ☹ One washer was dirty so I threw the rags I use and the rag mop head in and ran it through a wash. The floors were wet in spots from snow boots/shoes so I just swept with the broom, then did a quick damp mopping.

Today, I seemed quicker than normal, geesh! I did have to take the shovel out and clear the 3’ wide walkway across the side of the building as well as the front and back entrances. That filled up the rest of the hour. After sprinkling down the last of the salt in the bucket, I was done. Already, with the patches of sun I was seeing, I could see it melting the snow by the time I left. I was in the winners circle today as in one lint tray I found $10.35!

I stopped at Walmart for 4 items and came out with about 14. Never fails but I just figure when I’m there, I’ll get this and this and this. I may have to stop Friday for milk but we’ll see. The store is always busy but not overly. Everyone is courteous and friendly, customers included. We are all in this together and seem to understand it helps to be cordial about it. I checked through the self-checkout, in and out like clockwork. "Have a good day, ladies!"

At the car, I texted Donna that I was on my way. I had a bag with two puzzles for her and 2 tops. As a show (mostly for her neighbours, in case they are the ‘type’), I wore my mask around my neck and slipped it up over my nose and mouth when she opened the door. She got a laugh out of that. I wasn’t in the house long, and I’m certainly not worried about passing anything to or getting anything from my sister. We’ve seen each other often enough during this pandemic.

It was a straight drive home. Interesting how in 2-3 hours, the roads have cleared up. Even close to Paisley but entering the outskirts, the snow started again and clouds were in control of the sky. Wes had had Jim come in and clear the laneway while I was gone, which I was glad. Not so much for me but for Bill. He had a hard time backing in last night, even with the 600 lbs. of sand bags in the back. It's the ice underneath. Probably Wes will spread some of his ice salt down to melt the hard-packed stuff. 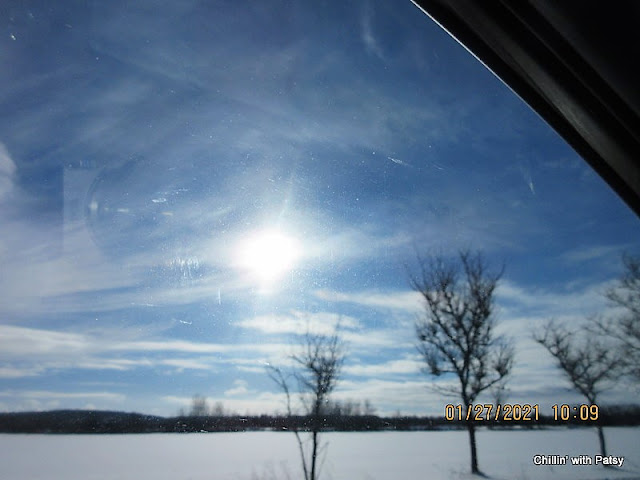 My new coat/jacket was due to arrive yesterday by FedEx and wouldn’t you know it, the weather delayed it. I’ve received a message acknowledging that it should be here today. I hope so and I hope it fits this time. 😊 Since it was just before noon hour, I put the groceries away and immediately made myself another one of those yummy quesadillas. This time with some sour cream that needed to be cleaned up.

Upstairs, I started my blog and then went down to do the dishes and work (play) on the puzzle. It didn’t take long to put in the last 30 pieces and when I got to the last one, I called Susan in to show her. I left the last piece for her to place. Now she could say she did ‘some’ of it. 😊 She was quite pleased with how it looked, and has fond memories of where she got the puzzle and from whom. They have a car they call Betty Boop so the framed puzzle will go with them for display at their car shows.

With that puzzle completed, I came upstairs to look for my next one. I have 4 left to do, one from my girlfriend, Brenda, 2 from Donna and 1 that I’ve had for a while. Three of them are 750 pieces so I will work on those here first, where I have room to spread the pieces out. At home, in the Bunky or in the Suite, I am only able to do the 500 pc. puzzles. The snow, once more, has been off and on all day but not at all heavy like yesterday.

I walked over to the Foodmart variety across the street to buy some lottery tickets. I figured I was lucky enough to find $ in the Mat today, I may as well see how far the luck goes. LOL I never hold my breath but it is fun to try once in a while. When I returned, I made myself a cup of tea and began preparing supper. I’d decided on lasagna in Madame IP. Bill came in around 4:30 just as I was finishing the prep.

We came upstairs after I opened a Pillsbury can of crescent rolls. Always nice to go along with pasta. I’ve never made lasagna in the springform pan but someone in my IP group on Facebook did that. Worth a shot although mine is always so runny that I think I’ll be serving it right out of the pan rather than removing the bottom like she did. I don’t add cottage cheese to my recipe, never have, so it is never as thickly packed.  I add enough other cheeses. 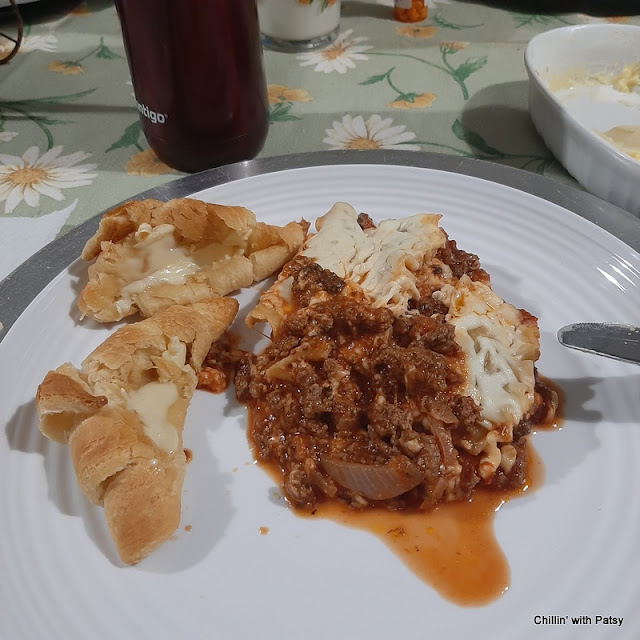 Supper was delicious and we have leftovers for another night. We cleaned up dishes, Bill made his lunch and I went next door into the tv room to watch Jeopardy. I’ve missed it all week and apparently one contestant is doing really well, on his 5th or 6th game. I can’t even imagine knowing that much stuff! Wow! The evening following was quiet but I wasn’t in the mood for starting a new book yet. There were some crosswords and Jumbles that I did instead.

Thanks for stopping in. Have a great night!

Posted by Patsy Irene (Chillin' with Patsy) at 7:46 PM