On Friday, May 21st I don’t know where the morning went. We were awake at 5:15 to Gibbs’s whimpering. Figuring he had to go out, Bill woke up from what he feels was a deep sleep. A sucker for punishment, when he brought Gibbs in from outside, he brought him up to our bed. We both want him to get used to settling down with us up there AFTER sleeping the whole night in his crate. We have a king size bed which welcomes a little fur baby. 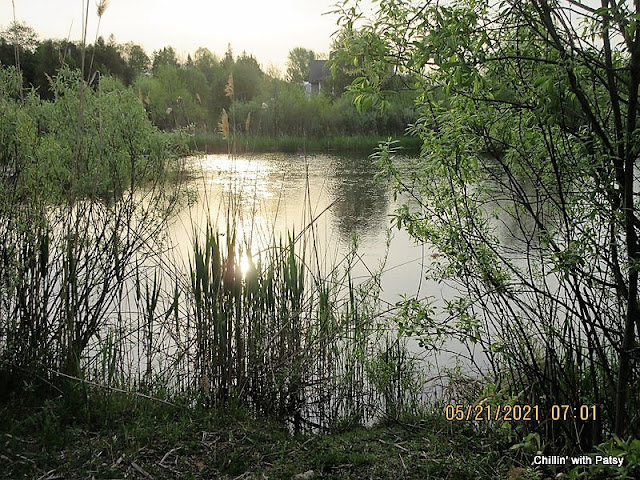 He played and chewed and tried to rough-house so Bill took him downstairs. No one was more surprised than he was when he came right up those two steps as if he’d been doing it the whole time! After picking him up a second time, I was able to hold him down long enough to rub his tummy. That works like a charm and he became more still. He wandered the edges of the high bed and whined at his reflection in the mirror from my side.

When Bill got up and left us alone, Gibbs finally stretched out to sleep. “Figures, now you sleep” Bill remarked. 😊 We stayed there for 20 minutes before I got up and lifted him off the bed. I took him out again and he managed another squirt or two. Bill left at 6:45 and at 7, I left Gibbs in his crate and went for my walk. At 1.40 miles, I turned back and headed for home. It was beautiful out with a lovely breeze.

On the return trip, I met Rob and Bethany, the Pastor and his wife. We stopped on our respective sides of the road and caught up with things for about 20 minutes. I like them and although I’ve been informed from a couple of sources that they are ‘different’, I will reserve my opinion until I get to know them better. We left it that we’ll see each other on the road and try to get together for a campfire when things open up. 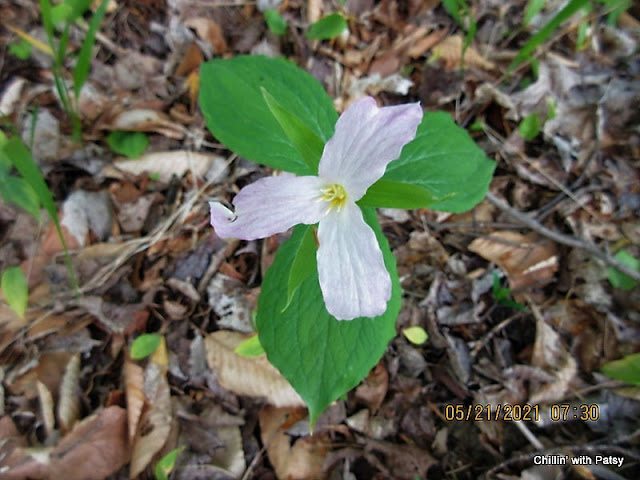 Speaking of things opening up, apparently starting tomorrow, outdoor activities are allowed to open with the usual Covid restrictions. Masks and distancing. But at least golfers, tennis players and rc fliers can get out again. I never understood why those things were closed in the first place. So, eventually we hope for more openness to the events we want to partake in. For us, one big one is to be able to gather with some family and friends in larger groupings and to eat in a restaurant!

I drove to BizyBee after a bit of ‘no success’ shopping in Durham and picked up my 4 items. I am very pleased with the ladies’ moccasins, beauty case of brand-new lipsticks (all colours I’ll wear) and the two ponchos. The bag of cleaning supplies, some full, some half full, will be used accordingly with a couple of the items not useful to us at all. Oven cleaner and concrete filler. Maybe the oven cleaner would work on the Weber Q, now that I think of it. Any ideas? Still a good deal for the $7 I paid for the lot. I made a stop at Walmart for a few grocery items. It was nice to see a couple of rv’s pull in to shop. 😊

Back home, I made one last stop at M’s to help him set notifications on his phone (he’s hopeless with this stuff) and helped him put the driver’s side fender on the next project. We had to take the old one off as it was in bad shape. Like the tonneau cover on the Ford, this was easier putting on than taking off. Within 20 minutes I was headed home with the groceries. When I opened the door, I was stunned to see 2 little black eyes greeting me. Wha?? How did he get out of his crate? Obviously, even though I made sure to latch it, there was something I did wrong.

I walked through the Suite and he had been upstairs and dragged our bathroom mat into the bedroom. We have a 4’ x 2’ soft mat at the foot of the bed and it was all bunched up in a ball. However, I also found a wet spot on the carpet. He was probably so excited that he got up there again! Ha ha. I put him out and he finished his business before coming back inside. I didn't get mad at him since he wouldn't know what he did wrong.

I made some lunch and then closed things up, shutting all windows. It was time to test our a/c since it was fixed over the winter. How wonderful to hear it kick on so I set it a few degrees lower than the inside temperature and let it do its thing. When Bill got home around 2:30, it was nice and cool inside. He had gone by way of the Acreage and filled the water bladder. We were down to about 8 gallons here at home. Gibbs was happy to see him so I took him out for a piddle first. He tends to get excited and might dribble. 😊

Bill finished emptying the bladder and doing the banking before we all went upstairs to have a snooze. It wasn’t as cool up there as I didn’t turn that a/c unit on, but it was okay. Gibbs wouldn’t settle down again so Bill put him downstairs and closed the sliding door at the top of the stairs. After about a minute of whining, Gibbs quieted right down. When we came down an hour later, he’d been sleeping at the end of the island, being a good boy.

For supper we had Basa filets and fries. It is Friday night after all but I still miss the fish and chips from The Paisley Common. Hopefully soon, we can get over there for a meal. This was a nice day, a bit of a hectic morning but a lazy afternoon here at home. Still no rain so I watered my plants with the two watering cans after supper.

When I came back in, I finished drying the dishes that Bill had started. I poured us each a rum and Zero Coke and when I went out to take some plant pictures, Gibbs came out with me.

That was just plain fun, walking with the fur ball running around my feet. 😂 He was having a blast. He ate all his supper again tonight so we're happy about that.

Posted by Patsy Irene (Chillin' with Patsy) at 7:39 PM