A Day for Chillin’, Men will be Boys! The Ridge is Ready!

On Sunday, Aug. 8th I was the first one up. Got dressed and took Gibbs out for his first run and then he got back up on the bed with Daddy. I got washed and brushed my teeth, ready for work. It was 7:15 when I left for town with a basket of laundry. What I didn’t know was that Gibbs was being an imp in the Suite, grabbing my flip flops and running around the island with them while I was gone. ☹ 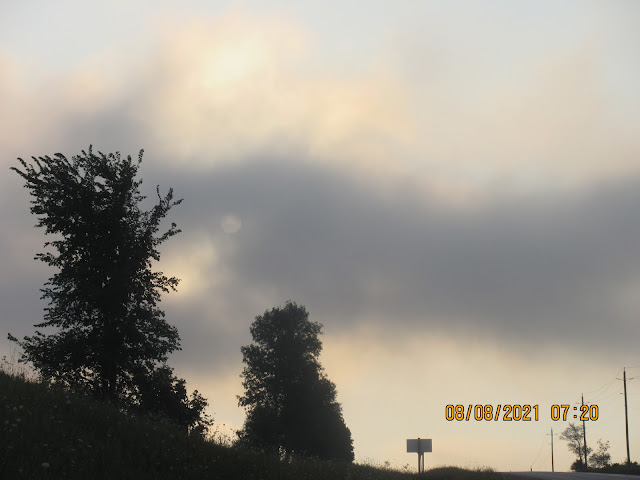 When I returned, Bill came out with the little scamp who ran over to greet me at the car. I’d finished my tea so immediately started hanging the clothes on the line. I knew that Bill wanted to cut grass so I put Gibbs on his leash and secured him to my laundry stool so he didn’t get in the way. There didn’t seem to be that many clothes this week, I guess we wore more of the same thing day in and day out. With the warmth and breeze, they shouldn’t take long to dry.

It was a cloudy day, from beginning to end, but quite humid again so we left the a/c on, set around 73F. Just enough to keep it comfortable. While Bill was cutting the back field, I sat with Gibbs on the patio. I heard the mower stop so figured he was moving something out of his way, but that was odd. Then I saw Bill come up for the chain, a rope, a come-along and the wheelbarrow. Then I knew that he was stuck. Again! 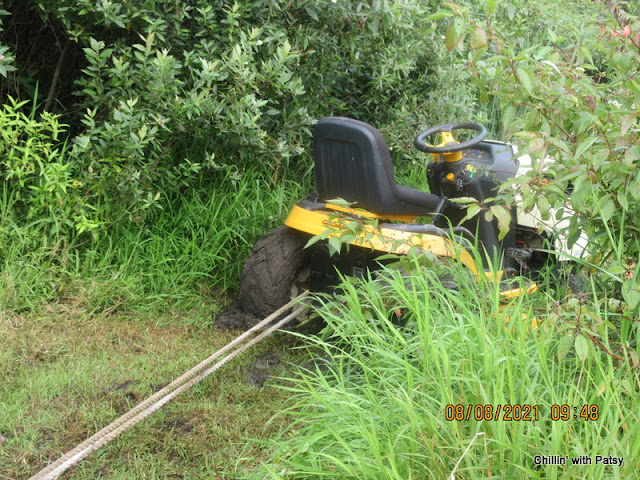 Oh brother!! I slipped into my clogs and wandered down. Sure enough, he went into places he shouldn’t have and his back tires were mired in muck. I couldn’t see the front tires from where I was standing and dared not walk any farther into the soggy grass. After teasing him almost enough, teehee, I was more his eyes as he hooked up the mower to the rope to the come-along to the chain to the stump. I could see when it was actually moving the machine backwards.

Eventually, he was able to back it up and promised me that he wouldn’t go in again so I took the wheelbarrow with his materials back up to the shed. He just grins while I seriously wonder how old he is. I’m kidding, of course, but at least once a year, he pushes the limits to go just a little bit further and gets into a mess.

He finished the back field and came in for some bacon and eggs. I did the dishes while he did the front and then it was all done. With more trimming in the morning, his choice, the Ridge will be ready for company.  When he came in later, he reported that there were a few drops of rain so I went out to check the clothes. They were dry with the exception of his jean pockets so I brought them all in. They will finish drying on the hangers in the closet.

We chatted with our friends, Marlene and Benno, and although we’ll miss them this week, are happy to hear they are having a great vacation away. We’ll hopefully see them in the fall if not sooner. For supper, I’d planned chicken thighs since that is what I have most of in the freezer. I had Rosy out to do the bacon (so good!) so will use her to cook the thighs as well.

Bill hopped in Black Beauty after a chair snooze and then went to get water from the Acreage.  We weren’t as low as we thought, I didn’t have my glasses on when I pushed the control button so thought we were at 35 gallons when it was 47. Oh well, this bladder full will fill us up. Gibbs missed his snooze up on the bed so when Bill returned and sat in his chair, the little guy wasted no time, climbing up his legs to sleep on him. 😉

Bill went to the Hangar until it was time for supper and I got things ready inside. I spiced the thighs and they only took about 20 minutes in Rosy. I cooked some spaghetti squash for me, corn for Bill and made a Caesar salad for each of us. I do believe I missed tonight’s photo of our food. We watched the remainder of the movie I had on while I was preparing supper with Robert Downy Jr. and Marisa Tomei and then did the dishes.

There was a bit of grass that got missed in the cutting so Bill went out to finish that while I worked on my blog. It was a pretty nice evening and after Gibbs had his supper, he wanted to go out. He still likes to be on the leash at the stairs and I figure it is more when one of us is outside. Maybe he thinks he is keeping an eye on us, or he wants to be outside since he has been sleeping indoors a lot this afternoon.

This was a good day and the laundry is finished for another week. I hope you’ve enjoyed your weekend.

Posted by Patsy Irene (Chillin' with Patsy) at 6:21 AM