So, Sunday, Aug. 1st brought us a similar day to our last July day. Boy, is this typical weather for the Civic Holiday long weekend? No, not really. We would expect this perhaps in May or September but it has ‘traditionally’ been a hot, mostly dry three days in the past. As a family, we were up around 8 and I skipped a walk again today. That’s just too many days without getting out there on the road so I’ll have to make up for it this week.

There isn’t much to write about today. With the weather forecasting a lot of rain periods, we weren’t planning on going over to the Acreage and even the 4 campers over there talked about going home for the day and returning tomorrow. Another ‘different’ plan for this weekend but when you can’t do anything but sit under cover or inside, you may as well be at home. Bill and I don’t have a choice but are quite used to that and quite comfortable with that. 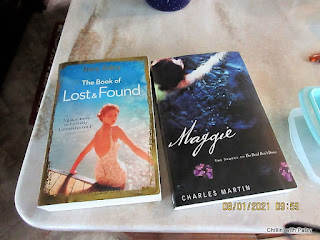 As it turned out, the day wasn’t a wash out and for much of the morning and early afternoon, we were all outside. Gibbs is a little rascal and has taken to running away from us when he is off leash. Not off the property, that would be hard to do, but just away when we want to reign him in for one reason or another. Therefore, to give him some freedom and us some control, I let him out with his leash dragging behind him. We can slow him down quickly as long as we can get within the 3’ leash length, and we can usually do that.

He was good and got lots of exercise. I was able to dig and plant the Moonflower plants that I got from Gayle, finding a patch of good earth along the east side of the Bunky. Bill had the sprinkler going for a while and Gibbs had me laughing as he tried to get a drink from it. He looked like a little drowned rat after a few chases around the garden, through the spray. We chatted with our friends, Ron and Loree, while outside and it was during that call that a baby robin dropped out of the tree by the hammock. ☹

Gibbs was pretty gentle with it but barked up a storm while playing with it. Sadly, the little bird didn’t survive the fall so I scooped it up from the furry little paws as he pushed it around. The rain shooed us inside around 2 and Bill and Gibbs went up for a snooze. Since I’d finished my book last night (Fifty Fifty by James Patterson), a book I highly recommend for a fast, page-turning crime mystery, I played my Scrabble-go games and began a new one in between my own dozes. 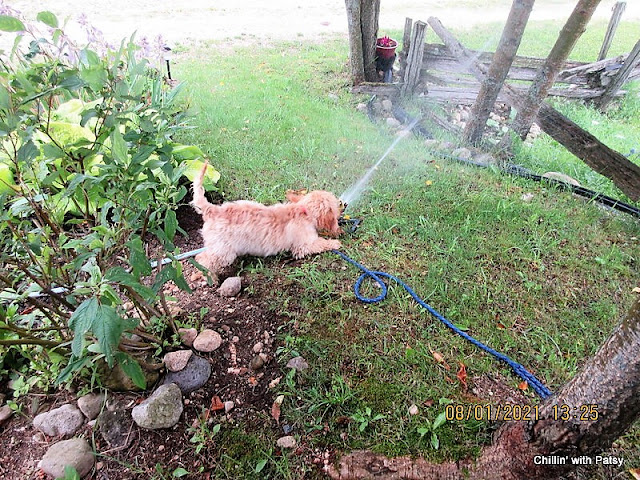 This book is called Rain Gods by James Lee Burke. It has started out good too so should be another quick read. I’d taken steak out of the freezer this morning for a nice Sunday supper but with this weather, we won’t be bbq’ing. Instead, I pulled out 2 pieces of haddock and Bill can have fries while I have my leftover fettucine alfredo from Thursday’s meal. Tomorrow will be a dry day and nicer for our steak.

Supper turned out well, nice and easy and after dishes, we did our usual evening television watching. It was the finale of Why Women Kill as well as The Good Witch. That always leaves a void for a few weeks until we find something else to watch in the coming weeks. LOL This has been a strange summer, just not feeling like summer to me. The days have gone quickly but the weather seems to have turned the season upside down.

I hope you are having a wonderful weekend and have been able to get out and about a bit with family and/or friends.