Wednesday, Aug. 18th after Bill left for Hanover, I fed Gibbs, took him out and then left him with his responsibility again. He’s getting better, seeming to understand that he gets something when I leave AND that I do return. 😊 He does still get anxious when he sees me (us) put our shoes on and I grab my purse and keys but other than hovering at the door, I haven’t heard a peep the last couple of times. Our little boy is growing up. 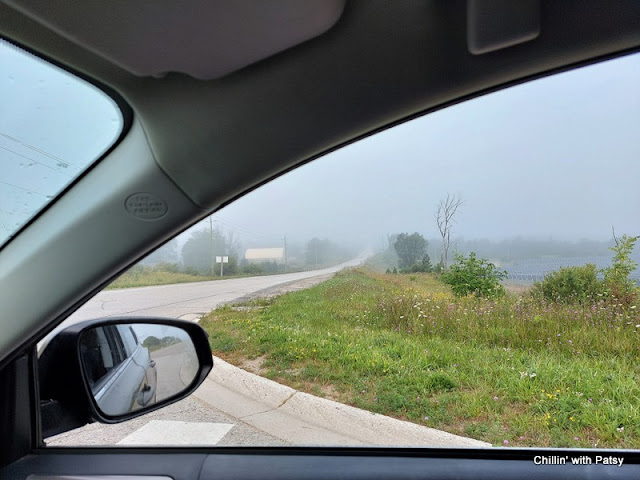 The laundromat floor was the worst thing to clean but I expect normal dirt. I loaded 2 washers with our chair covers and our chenille bedspread before starting with my normal routine. Leaving there, I drove to the Water Store to fill our big bottle. Gibbs greeted me at the door after I hung the things on the line. The forecast on my phone app said cloudy but it was a clear sky for a lot of the morning. It wouldn’t take long, I’m sure, for them to dry.

After my tea, Gibbs wanted to go outside so I put him on his rope leash and he was content. I felt like doing something productive so dust mopped the Suite and then washed them with my new system. It is so easy that I’ve actually done this 3 times in a month! I never used to wash our floors regularly! 😊 I took the window mop outside and wet them, just water, doing the windows all around the Suite. I found out later that I used the wrong one but other than a few spots on my little window, they still looked wonderful.

I moved on to the outer windows on Ptooties and the dash and doors inside. The car itself was quite dirty but I don’t have the car wash mitt (yet) so it will wait for today. That’s from the rain and gravel roads we’ve been on lately. I was encouraged and wanted to see if I could spiff up the inside of our Weber Q lid. Hmm, I had the Norwex oven and grill cleaner and followed Marie’s directions. It worked quite well but cleaning the bbq is not something we’ve ever done regularly so……….it wasn’t perfect. Maybe later, I might have to try it again for the built-up crud.

When Gibbs and I came inside, I was washing out the floor pads, napkins and cloths when Canada Post dropped off a parcel on the step. I didn’t even see her and Gibbs didn’t hear her. The a/c was probably running so that would explain it. He has exceptional hearing and doesn’t usually miss a thing barking at many motors and noises.

I never stop being amazed at Amazon.ca. Yesterday morning, I ordered a couple of phone cases for our new Samsung phones, a book and screen protectors for the phones as well. Today, the post office delivered 2 of these items and the next two items will be arriving on Tuesday. With this record, I’ll bet they’re here before the weekend. 😊 That would be great!

It was around 1:30 that M called and asked if I would mind sitting at his place to keep an eye on his Yard Sale while he ran some errands. I wasn’t doing anything other than I placed my Norwex order on Donna’s party site so left Gibbs in charge once more and drove around the corner. There were only a couple of ‘window shoppers’ and nothing was purchased. Just as well, I don’t like bartering with someone else’s items anyway. 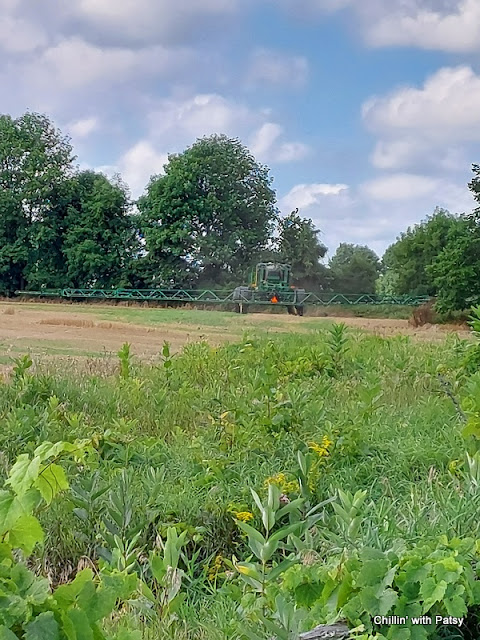 When he returned around 4:15, I returned home and again, just minutes after Bill. The day had turned quite hot again and while I’d waited at M’s, I took it upon myself to dead head his petunias. It’s what I did last summer for a while before it got too hot. We came inside and while Bill dozed, I held Gibbs, trying to keep him entertained so as not to bother Daddy. I brought the items in off the line and we put the chair covers back in place. The bedspread went on after supper.

We had sloppy joes, always different each time I make it, on toasted buns and it was quite good. I used one of my ‘hot’ peppers and while they were almost unnoticeable in the mix, I’d touched my finger to my lip and that burned! Eventually it eased, lesson learned. I hope! We cleaned up dishes and I saw that there is enough left over for at least one person for another meal.

I worked on my blog and Bill sat to apply the screen protectors. My applications are never perfect and he is better at this kind of thing. 😊 This was a good day. I feel like I got a lot of small things done and earned a bit of cash in the process. Our temperatures are supposed to continue to rise over the next few days so once more, we acknowledge our crazy summer weather.

Thank you for stopping around today. Your comments are welcome.