A Not so Nice Saturday but Family Time Prevails

On Saturday, July 31st (last day of the month!!) after realizing that summer was half over (kind of) we were up out of bed around 7. Bill took Gibbs out and I made the bed and got washed for work. I left the house around 7:15 to go clean the Mat. It was messy as it often is, mostly just from inconsiderate patrons.

The floor was littered with small paper, about 10 used dryer sheets, elastics and then I entered the bathroom. Someone had pulled the t.p holder open and removed the lower cabinet that covers the pipes. It is an old facility, true enough, but come on, do you have to wreck what is there? I grumbled at the rudeness of ‘some people’ and cleaned it up. Once the floor was swept, the rest of my job was pretty normal.

From there I stopped at Foodland for some milk and the Water Depot for a jug of water before heading home. It was a coolish morning, feeling like it could rain at any time. Bill started cutting the lawn after I left and finished up after I returned home. Around noon, I made us western-type sandwiches for lunch. Bill had his on a toasted bun and had mine in a crispy tortilla. I couldn’t eat it all so will have the rest tomorrow. 😊

I finished my blog post and remembered to send some pictures to my sisters from Ladyfest. I'd taken a couple of group shots. Bill and Gibbs went up for a snooze shortly after 2 and we spoke to my daughter about their plans for the day. They were driving from Woodstock to partake in the Acreage Campout but just for the day and evening. The weather was not cooperating with some scattered rain showers around 2 and then 3, stopping in between. ☹ Darn rain, go away! 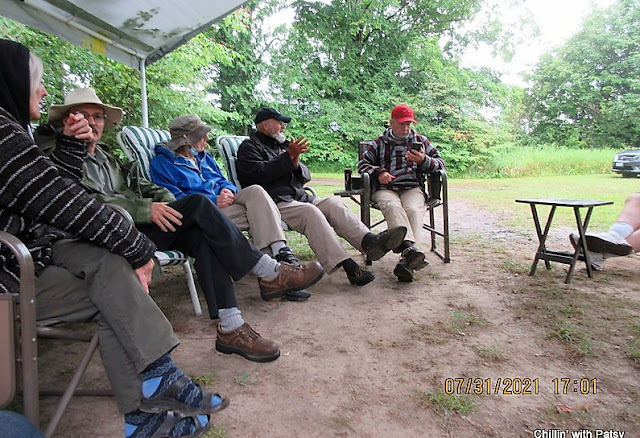 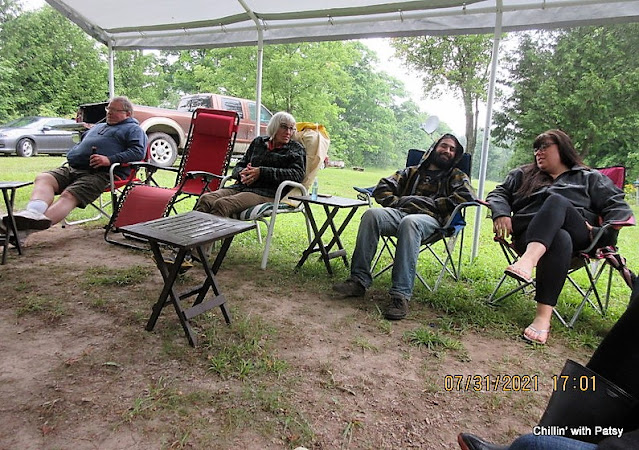 We packed a cooler and headed over for a couple of hours before supper. We’d return later for a campfire if it worked out. The rain was trying its darnedest to be a deterrent but it didn’t win out. We moved to a bigger shelter where all 14 chairs would fit. It was nice to see our cousin, Harvey, and Mom’s only remaining brother, Uncle Jerry, and our niece, Joanne, as well. Chris, Jake and Bridgette arrived about 20 minutes after us and with a little urging, the boys played guitar while Bridgette sang along. Serenaded under the canopy.


Around 7, Bill, Gibbs and I returned home for hot dogs and chips while the rest of the campers ate theirs. We agreed that Gibbs would stay home when we went back for he campfire, he would likely sleep after his busy day and we could relax a little easier. It was tricky slipping out of the house but after his supper and a short walk, he took a treat and I snuck out. (sneakily 😊). The rain seemed to have stopped and by this time, my youngest sister, Wendy, had also arrived for the evening.

At the Acreage there are a couple of cabins available, one quite rustic, for overnight guests and room for rv’s of all kinds, but no one else other than Gayle and John were staying the night. The yearly gathering, lately, has become much smaller than the usual 40 visitors that used to attend, with about 30+ regular campers staying for the whole weekend. As our childrens’ families grew, so did their commitments to other things which drew them away. Today, we celebrated Donna and Gerry's 11th anniversary, having tied the knot under a big tent right on the Acreage property. 😍

We take it for what it is and enjoy every smiling face that shows up for however long they can. It was a good campfire, Bill was the Fire Master tonight and the dampness of the previous night and earlier day seemed to have dissipated. It didn’t feel too cold and the hungry mosquitoes from the wet daytime weren’t as apparent. Thank goodness they only appeared for a short time and went on their way. Donna and Gerry were watching the bats fly overhead, enjoying the feast!

At home by 11, we finished watching a movie we’d started earlier and were in bed by midnight. It was a great day despite the showers. 😊

Thank you for popping in. Your comments are always appreciated.

Posted by Patsy Irene (Chillin' with Patsy) at 7:35 AM