What’s with the Weather? Good Thing we Make our own Fun

On Tuesday, Aug. 10th we were awake a couple of times through the night. It was hot up there again and Bill seemed to be awake into the wee hours. I’m sure glad I don’t have his sleep habits! I wouldn’t be able to function during the day. He took Gibbs down for a drink and then out for some business. Next time that I woke up, it was 6:15 so I rolled over. I think Bill took him out then too since he had to get up for himself anyway.

The next thing I knew, we were all waking up together and it was 7:30! Darn! I had to clean the Mat and do like to get there early. I was up, washed, dressed and out the door by 8. There were a couple of dryers in use and one other customer came in while I was there. I can’t get over the number of men doing laundry. More men than women come in unless it is a couple. Single Dad’s? Anyway, just an interesting observation. 😊

I left the Mat at a few minutes past 9 and went to fill the water jug before making my way home. It was during my hour in the laundromat that it rained for about 10 minutes but very lightly. I didn’t need to close the doors but rather we enjoyed the lovely breeze wafting in. It was so hot in there and I couldn’t wait to get out to the fresh air. The change machine was working fine today, yay! Small things make me happy, as you can tell.

We didn’t see our guests all morning, other than Kim nipped out to hand me some cobs of freshly picked corn that they got from a vegetable stand. That was very sweet and we’ll enjoy some tonight with our burgers. At 12:30, Bill took Ptooties down the road to the same location of Northline Service & Repair. Rob, the owner’s wife has her own hair salon in the back of their home. This I found out from the conversation he and I had when he picked up our mower.

Bill was very pleased with Bonnie and the cut so I added her to our Contacts. I’ll be continuing to cut my own for now but may need her services for the November wedding. We’ll see. In the meantime, we know where Bill can go when he needs it. For lunch, when he returned, we made ourselves a sandwich. I just had toast and peanut butter and toast and some of the Lemon Honey I got from Gibson’s. It was a nice tasty change.

The rain began around 2, lightly at first and then a nice shower for about 10 minutes. It seemed to brighten up immediately after it stopped so perhaps Happy Hour will be held outside after all. It was a warm day, reaching the forecasted high of 25C/76F by mid-day. At 3, we met for Happy Hour. The sky wasn’t clear but it had improved and we agreed to gather outside in the shade. We left Gibbs inside for about an hour and then I brought him out.

The time passed quickly with lots to talk about and the only dampness felt was what Kim and I felt from sitting under the blowing tree branches. It was actually very light and sporadically and it was refreshing. 😊 Tonight, we paid more attention to the time and broke up for supper around 6. Bill lit the Weber and remarked at how big Mona had gotten. I think it was the first time he’d noticed such a difference. I added more leaves and a couple of sticks for when she was ready to start shedding her skin and creating her chrysalis.

We had burgers and shared a cob of corn. I had cauliflower rice and no bun so I would have room left for a piece of Anna Mae’s pie. This restaurant in Millbank, for those who don’t know, is a Mennonite venue with the best baked goods in the area. When you eat in their restaurant, you will always get delicious home-cooked meals, never leaving hungry or disappointed. Two of Bill’s daughters began their working careers there when they lived just around the corner.

Kim and Ken had picked up a couple of pies and we walked over for a shared dessert. Hmmm, cherry and apple crumble. We enjoyed another hour or so just reminiscing about days gone by. Oh, the memories! Once one story was told, another one was shared and so on. We all agreed that things were pretty darn easy ‘back in those days ‘. Things are so complicated now, nothing seems to be cut and dry.

We walked back home around? I didn’t look at the clock and I’m not wearing my watch these days. We watched the last hour of America’s got Talent so I guess it was around 9. At 10, I was fighting to keep my eyes open so after Bill took Gibbs out for a last piddle, we went to bed. We weren’t overly active today because the jobs that Bill wants to do will take some time plus a forecast that he can count on. 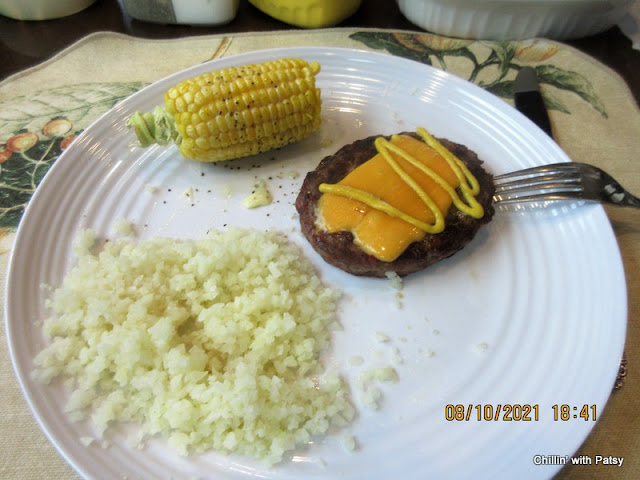 The fridge water dispenser and ice maker has not been working since we brought the Suite home from CanAm. Staff there agrees with Bill that it could not have been winterized properly and that has caused the issue. We’ve ordered and received the valve necessary to fix it and Ken has offered to lend a hand. This is a big fridge so I will empty the freezer and much of the inside items to make it easy for jiggying it. Access has to be from outside, of course.

Today wasn’t the day with the possibility of rain showers at any given hour so fingers crossed for Wednesday morning. This has been another good day and we are enjoying the time with our friends. 😊

Posted by Patsy Irene (Chillin' with Patsy) at 5:17 PM