The Campout is Over, Jazz Gets Out, Gibbs Gets Responsibilities

On Sunday, Aug. 15th we were awake around 6. After a trip outside Bill and Gibbs came back to bed until 7:30. That was nice as I was still feeling tired and rested for the hour with nothing pressing on my plate. The forecast for the day wasn’t going to be unbearable, 24C/75F, so I knew I could walk a bit later than normal.

We had our drinks and around 8:30 Gibbs and I headed out. It was lovely and I didn’t need a jacket even though it was just 12C/54F. The absence of wind makes a huge difference if the sun is out. We didn’t get to Turbine Lane again, he just stopped in the middle of the road and looked at me. Funny little bum. So, we were back home within 45 minutes. He knows the word ‘walk’ now and is anxious to get his harness on. 😊

Bill went down to the Hangar and got his Telemaster out of the cargo trailer and worked away at a couple of adjustments it needed. Our guests, (can I call them that when they are sleeping in their own unit?), were packing up and so I set up my funky tripod for a group shot before they pulled over to the outhouse to dump at our ‘station’. They pulled out at 10:15 and Bill went back to the Hangar.

Gibbs and I sat on the patio, me trying to read while keeping an eye on him and what was going into his mouth. I don’t usually get more than one chapter read at a time when I'm out with him, which really breaks up a good story, but I knew he’d be inside by himself later in the day so put my needs aside and paid attention to him. For about 30 minutes and then I moved to the sun, away from him. I'm not a saint! 😇

I made us bacon, eggs and toast and Bill had packed up just on time to come and eat at noon. We don’t have it as often anymore so it tasted really good. I even rolled up some egg and bacon into a slice of toast. Yum! We started getting washed and dressed for a ride on Jazz. My daughter and I had been going back and forth about Goodreads, books and Libby (Overdrive) on our phones so she called to make it simpler.

Good thing, I am not great at some of this stuff so her help was greatly appreciated. She reads multiple books at one time (I know!) some in hard copy, some on her phone and some audiobooks she listens to. I can focus on one only but from her synopsis of some of her books, I want to read them too. Now I have a better idea (I’m not saying I won’t be contacting her again!) of what I’m doing and how to go about it. 😊 Thanks Bridgette!

We left the Ridge, leaving Gibbs free in the lower level of the Suite and in charge of looking after the house, at 1:15 and headed towards Meaford. Bill wanted to show me the Papa V’s pizza place they worked on and also the town. It was a lovely ride and Jazz performed very well. I wore my light leather jacket and boots but Bill was quite comfy in his t-shirt and shoes. To each his own and I have to dress for myself. It was perfect for me too. 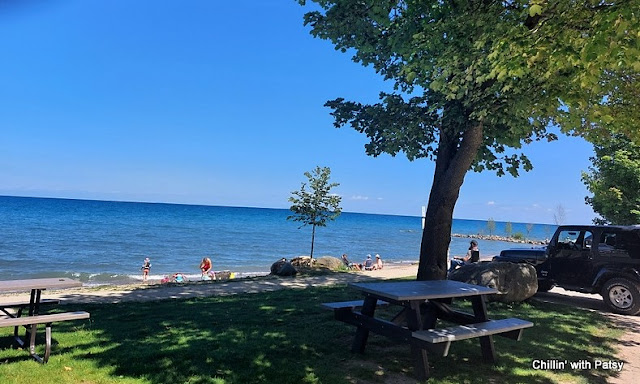 I didn’t have access to my camera on the way there so missed out on some ‘key’ view pictures but at the Marina, I got it out and took some shots of the beautiful waters of Georgian Bay. I never realized it was such a ‘touristy’ town with beaches. Good to know! We were home after 2 hours and stopped at Mitch’s around the corner to check out his Garage sale. I hadn’t seen him for almost 3 weeks so I was glad to see he was doing well. 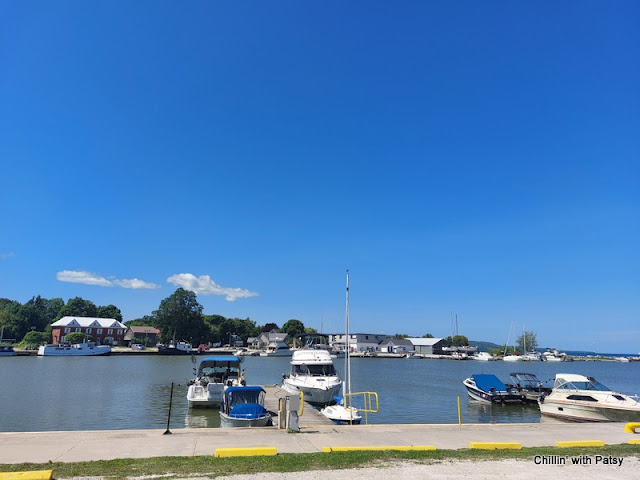 Gibbs greeted me at the door and did his usual little drops of excitement piddle before running out to meet Bill. Nothing was amiss, nothing was chewed on so we are feeling confident about that. He hadn’t touched a chew bone I gave him so that is proof that we were missed and he likely slept near the door the whole time. ☹ Oh, he’ll get better, we are sure of that and he sure ate the bone when we got home! 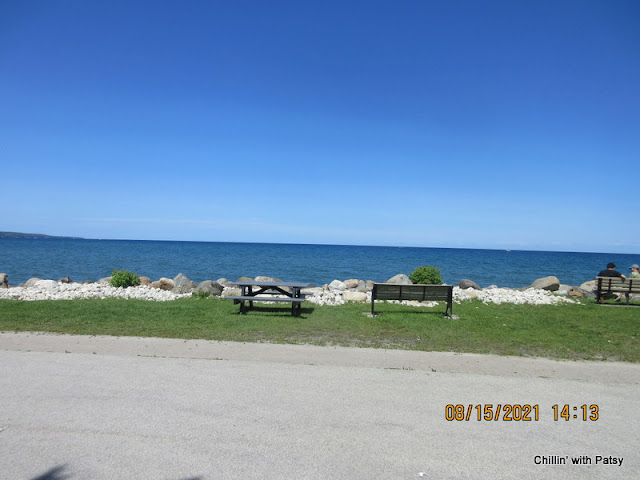 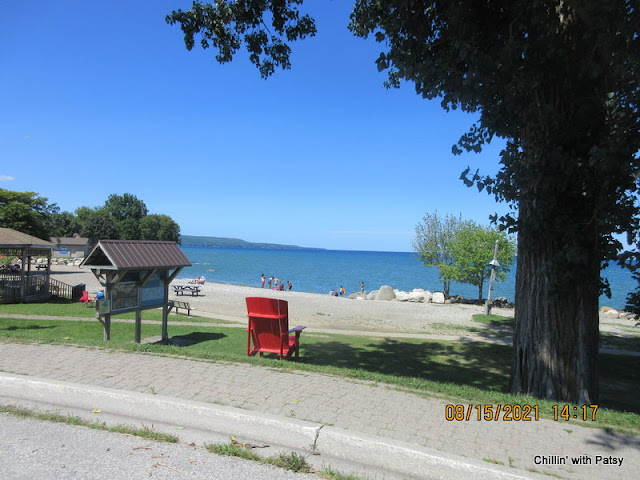 The two of them had a snooze up in the bedroom and I sat and read my book downstairs and then went outside to the shade. Boy, it had warmed up considerably again, since the wind died.

We had bbq’d pork chops for supper with veggies. I fried up the last of the potatoes for Bill and I reheated some cauliflower rice for me. It was all very good and for dessert, we shared the stewed rhubarb I made mid-week. I added cream to mine just because I like the fat content and it tastes yummy to me. 😊

After dishes, we relaxed for the evening. Well, I did. Bill had to make his lunch and have his shower so he didn’t relax until those things were done. This was a good Sunday even though we had to say goodbye to our company.  We’ll see them again and definitely keep in touch as always.

Thank you for stopping in! If you feel like leaving a comment, I’d love to hear from you.