The Holiday Weekend Winds Down

On Monday, Aug. 2nd we were up around 7:30, mostly on my push. I wanted to be at the Mat by 8 in case Jamie popped in. We sorted the dirty laundry and I left the house by 7:45. The air was coolish but we knew it would be a lovely day and my plan to hang the laundry came to fruition. Driving into town, there was a heavy (smokey ?) blanket of fog hanging above the horizon. I’ve never noticed such gray fog before. Jamie arrived at the Mat around 8:45 and it was just the right time.

The change machine wasn’t accepting bills and there were 4 male customers who needed some change. I’d helped one out with $20 from a washer before he arrived. It is always good catching up with Jamie about everyday things as I finished the floors and he emptied coin from the washers into the change machine. I had no other stops so headed home around 9:30 with $ in my pocket from a month’s work. It actually replaced what I spent on Ladyfest so that’s great!

I’d taken my tea with me so could get right at hanging the clothes without delay. The sun was out by now and the air was warming up. Bill was outside with Gibbs planning the location of his new flag pole and we discussed moving one of my newest hostas up in the berm garden to make it easier. I’ll either get to that today or one day this week. He also worked on some electrical hookup on the west side of the Bunky. Because Bill works all week, he is really missing out on time with his flying hobby. Today was his day to do that and I wasn’t about to interfere. 😊

While he did that, we let Gibbs run with his leash trailing behind him. He didn’t roam far from view but there soon came an end to his freedom. I decided to attack the corral garden, something that has bothered me for a long time. This was the perfect day, with temperatures ranging between 22C to 26C, to work in a garden, half sun, half shade. I made great strides for over an hour but 20 minutes in, I had to put our rascal on his rope leash to keep him out of the way. I couldn’t keep my eyes on him and focus on not slipping at the same time.

When he was with me, he ran through the garden dragging the leash and a few primrose plants got the brunt of it. LOL what a character! He is just having fun and not intentionally doing damage. 🐶 When I finished in the garden, I took my little shovel and dug a small grave up by the compost bin for the baby bird that didn’t survive from his fall. ☹ There, he won’t be alone, as I have buried 2 others that hit the Suite window over the past few years.

I debated moving the hosta now but since I’d let Gibbs off his tether, decided to do it when he wasn’t ‘helping’. I took my lounge chair, book, water, phone, Gibbs’s water & dish, leash and pillow down to sit in the sun at Bill’s Hangar. I thought this was a great way for us to be outside with my sweetie. Giving Gibbs a long enough lead to get to me and to the shade was a great idea but it just didn’t work out. He was constantly in Bill’s way as he walked back and forth to the cargo trailer, Hangar and his plane. Oh well.

I moved things back up to our seating area and Gibbs and I relaxed up there instead. The sun was gorgeous and I don’t get much opportunity to sit and soak it in, the way I love to. I wasn’t sitting long when Donna texted wondering if we were coming over to the Acreage. By that time, it was 4:30 and Bill was deep in the act of getting a couple of his planes charged and running. It isn’t a quick process getting them out and wings attached and by the time he’d get things put away it would be at least 5.

With a steak supper planned, time was not on our side for a pre-dinner visit. We had planned on getting water from their well today too so thought we’d get over after supper. You all know how plans change, the Jell-o jiggles and things don’t quite go as planned. It would have been nice to get over to see G & J, D & G once more and A & T before they headed back home to Quebec but……..it didn’t happen. 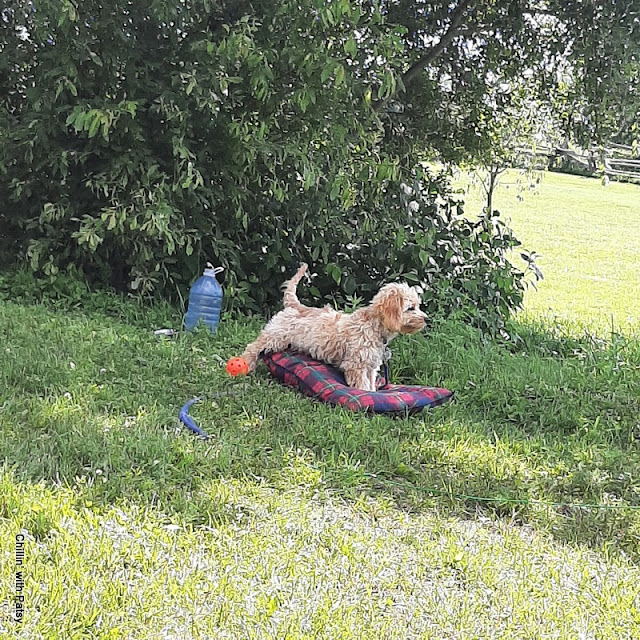 Bill, being the one working, I wasn’t about to tear him away from something he loves to do. I could have gone over if I didn’t also have something to accomplish. After a delicious bbq’d steak, fried mushroom and potato meal, we did dishes and he still had lunch to make plus his shower before bed. We didn’t go anywhere but up a few stairs at 10. 😊

It was a great day and I’m so very happy to have that weeding project done!! I checked out the garden and some tomatoes are in the yellow/orange/red stage right now so we should be eating them soon.

Posted by Patsy Irene (Chillin' with Patsy) at 6:59 AM