A Hot, Rainy Day, Plus A Memory

On Friday, Aug. 6th it was nice that we didn’t have to get up at any particular time. Bill, especially. It was 6:30 when we rose for the day. I still had to drive to town to some laundry and clean the Mat but my sweetie didn’t have to rush off anywhere. 😊 The Mat was in fair condition so I filled the washer with our sheets and blanket. Yup, I remembered them today!

I helped 3 people with change because the darn machine wasn’t accepting bills again. Bummer! I texted Jamie and dished out first $40, then $10, then another $10 in loonies, toonies and quarters from the washers before I left, so I’m glad I was available to help out. Jamie said he’d pop in later today after his shift. I had no other stops so headed home to hang the sheets.

Bill was decked out in his weed-trimming gear, cleaning the fence and garden lines up on the berm, while I wrestled against the wind to hang things. I had taken my tea again today so didn’t need to have it after returning home.

I sat inside for a while and then went out to see what we can get rid of from the Bunky. I’m still not sure if we’ll be taking anything to auction, since Rockford won’t take things until September and Bizy Bee hasn’t replied to my email. Bill has odd tool 'things' that we won't be donating until we're sure we can't $ for them.

I had a trunk full of stuff, that we don’t care about any return of $ on, so loaded it all into Ptooties. After Bill was finished, we had some lunch and put Gibbs in his crate. Bill needed some conduit from Hanover, we needed dog food from Pet Valu and some dog bones for a special someone (thanks Nancy for the push). We also required a few grocery items and vitamins from Walmart. First, we dropped off the donations at Salvation Army and then went about our other stops. Just doing that felt great. Purging is rewarding.

While in Hanover, we stopped at the Bell store to check on our options for upgrading our phones. They were coming up due after 2 years. Each time we deal with the gals in the store, we walk out happy and today was no different. We were a week early to upgrade for free but got the scoop on what the changes and new costs were for our Samsung. Yahooie! I felt great when we walked out with a quote for an increase in data for $5 less.

I know many people have problems with Bell but we’ve got nothing but good to say about the services and staff since we started dealing in person for our Canadian and US service. 😊 We’re happy campers and will be back when the time is up to get upgraded. Bill topped Ptooties up at the Pioneer station and we were home shortly after 2. Gibbs was ‘piddly’ happy to see us and we were grateful for our ‘no carpet’ home now. It is only dribbles but his excitement can only be due to his happiness to greet us or anyone.🐶

With everything put away and Bill finished the banking, he went up for a snooze. Gibbs got a special chewy, US/Cdn made, and I knew that would keep him busy for a while. He also got a bag of SmartBones treats which I’m sure he’ll enjoy just as much. All safe and well-known products for puppies. He was so enthralled with the chewy that he didn’t have a snooze with Daddy today. Hmm, I wonder how long they’ll last?

I felt tired too, so after starting my blog, I stretched out in my recliner for a shut eye. I’m almost finished my book so tonight; I hope to turn the last pages. 😊 We’d had a couple of douses of rain showers, one at 3:30 which lasted all of 5 minutes but it was heavy. Bill had taken a propane tank into FS Coop because it was reading empty. He was confused about the weight of it, it didn’t feel like it was empty. That was confirmed when he weighed it in town. Good thing he did that as it was half full and we only paid for a 20 lb’er.

When it rained again around 5:30, it was even heavier and lasted longer. Bill was in the Hangar and when I took Gibbs out for his piddle and walkabout, it felt a bit cooler to me. We walked up the berm, checking out my plants and I was happy to see that the vegetable garden got a great soaking. My weeding was perfectly timed! I should have followed through on my though to sprinkle them with Miracle Gro. The sky convinced me to fry the burgers inside rather than trusting the weather for a bbq. I texted Bill when it was ready and our loaded burgers and Caesar salad were very tasty.

After dishes, Bill went back down to the Hangar. He is preparing for a day in London tomorrow at a Fun Fly with his RC club there. I’m happy for him, that he’ll get a day away with his friends. Keith is one of the organizers, or THE organizer, so I’m sure it will be a good day. It will be a long, quiet day here for Gibbs and I. I did have the option for us to go along, however, a hot day sitting outside with a puppy isn’t my idea of a great day. If we took our Suite, different story. 😉 We’ll both be happier here at home although it would have been nice to see Keith and Oreo. 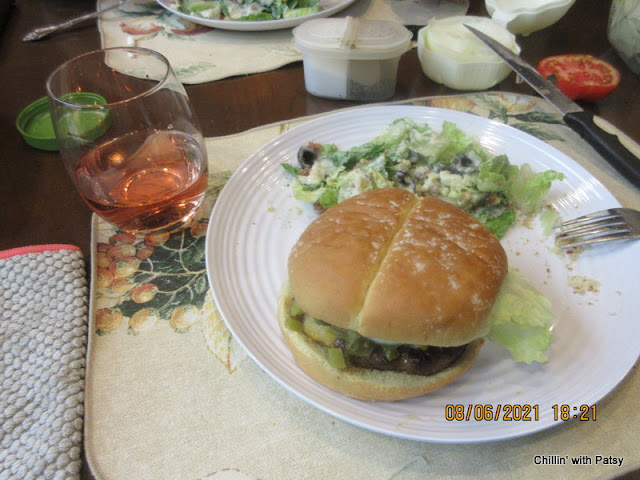 This was a good day and the rain watered the gardens for me. Bill managed to get the trimming around much of the property done and the Ridge looks awesome. He’ll cut grass on Sunday morning, in preparation for company. Yay! It will be quiet this year with only one rv couple coming but we will still have an awesome time. 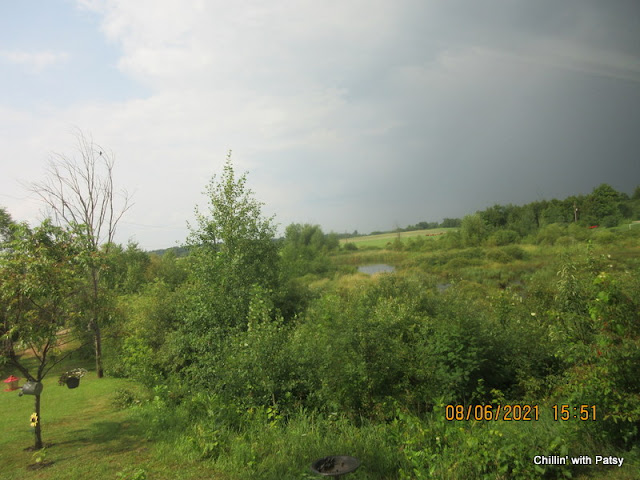 We have a special memory for today. Bill's Dad would be celebrating his 93rd birthday. Before he passed, Bill's siblings, husbands and us with Dad and Marilynne met yearly to celebrate. It sometimes meant a dinner out together and I would try to get pictures to mark the occasion. Often, I would get groans and moans at having to be on camera but I'll wager now, they will appreciate them.

Thank you for stopping in for a visit.

Posted by Patsy Irene (Chillin' with Patsy) at 7:42 AM