On Friday, Aug. 27th, it was again a cloudy start to the day. Bill was up at 6:30 today, he only had to go 10 minutes down the road for work. Gibbs and I got up around 7 and we were actually out the door for our walk before Bill left. I thought we’d walk to the east this morning, since that was the way he would be driving. Gibbs had other ideas. The big hill seemed to freak him out so he braked. 😊 I guess, from his perspective of 10” off the ground, it would seem daunting. 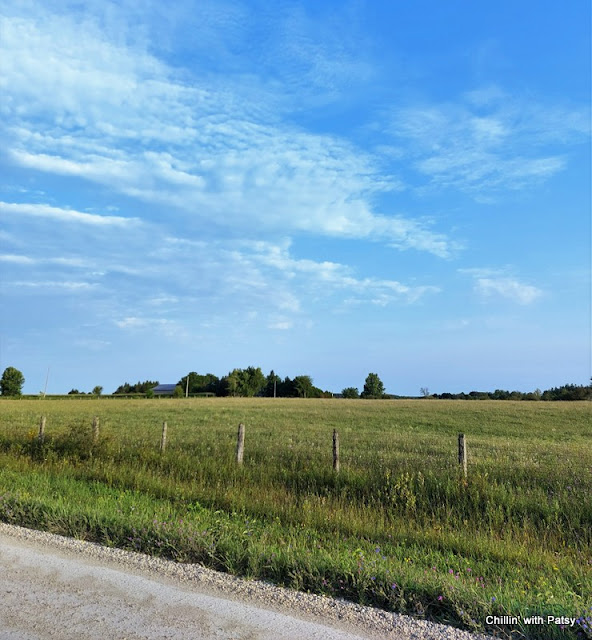 So, we turned back and walked to the corner of Baptist Church Road before returning home. Bill was delayed only because he’d got a call from the boss that he was delayed, which meant he was just getting ready to leave around 8 when we got up the lane. It was a walk none-the-less, even though only 20 minutes, better than no walk at all. Inside, I had my tea and finished publishing my blog. I’d taken a lot of pictures and videos of Mona yesterday so had to sort through those.

Sadly, she isn't looking too good. I kind of hoped she would pass on her own in the safety of her cage. ☹ I feel bad that she got so far only to be stuck. With her antennae still moving, we just have to let her live out her life. I figure there isn’t much I could have done differently and she gave me an amazing experience regardless of the outcome. I had some yogourt then Gibbs and I went outside. While he remained on his rope leash, and behaved very well, I went up the berm and began pulling vines off the fence and out of the trees. 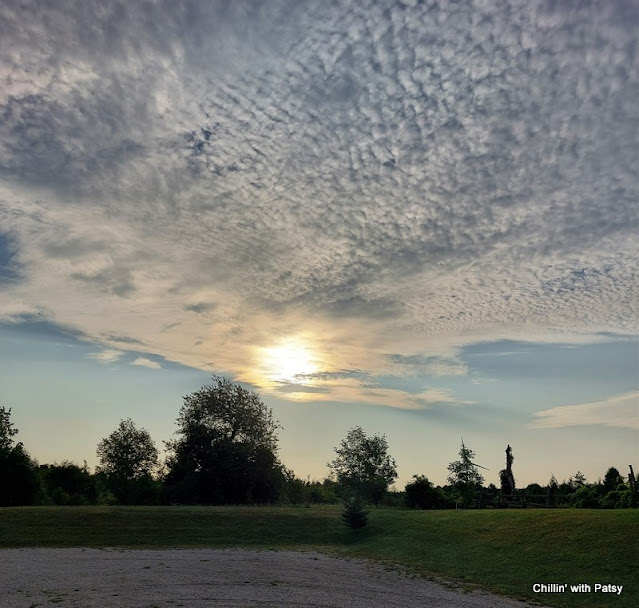 It is a useless vine, the small grape-like things, are not good for anything but perhaps birds. They must not like them though as the branches are loaded. The vines are strangling the small trees and I should have got out sooner to take care of this. It seems every year, they just take over. Getting them cut at the base of the plant is the thing to do but it is not easy, as most of it is either on the other side of the fence or down in long grass.

I used the clippers where necessary but mostly just pulled and pulled with gloved hands, freeing the trees and fences from its grip. It is a tough vine for sure. I was glad the day was cooler and there was a breeze but I was still huffing and puffing like an old steam engine by the time I finished for today. There is still more to get at it but that was a start. I also have to pick up the piles but I’ll do that another day too.

Back inside, I had some lunch and worked on the puzzle again. I love the picture so very anxious to get it completed. Bill surprised us by coming home early today, working only until noonish. He had his lunch and he and Gibbs went up to the bedroom for a snooze. They had a nice long one today. We’ve noticed a big improvement in the little guy’s behaviour lately. Oh, there are still a few things that he does to ‘test’ us, but he is getting so much better at many things. 😊

I finished the puzzle around 4 but was disappointed to find 2 pcs. missing. I kept hoping they would be found at the end but no, they weren’t. When the boys were snoozing, I took the opportunity to trim my toe nails (when Gibbs wasn’t around to help), removed my polish and gave them a fresh coat, in red this time.

We are going out for supper to help celebrate my sister, Gayle’s, birthday. A new place for all of us, I think, and there will be 8 of us. It will be nice to get out.

We left the house at 5:30 and drove to Hanover. Gibbs was in charge of the house and seems to take on the responsibility with grace now. 😊 Woops! We arrived at Queen’s Bush at a few minutes before 6 and got seated on the patio at our bar table.

It wasn’t until I texted Donna that Bill realized that the reservation was for 6:30. LOL That's what the waitress meant when she said "hmm, the early birds get the worm?" We didn't get her joke until later. There were complete renos going on inside so no indoor seating which worked well since it was a lovely evening. Other than a couple of yellow jackets (bees) pestering us all, we enjoyed the fresh air. The humidity seemed to have dissipated on time. Bill and I were alone for the first half hour so started off with a rum and Coke and a Margarita. Why not? It was a celebration. Hmm, I need to make these at home again!

Unfortunately, Ronin, our waitress was run off her feet as the place filled up with diners by 7. Maybe we should have all arrived at 6! This meant the chef was apparently overwhelmed and it took an hour before our meals arrived after ordering. We were all about ready to start chewing on our arms. 😊 Well, not quite, but we were hungry for sure. I ordered their homemade lasagna with Caesar salad and garlic toast and Bill ordered their QB burger with fries. Both were very good, no complaints. I brought half of mine home.

Donna and Gerry invited us all back to their place for carrot cake that John and Gayle brought but we declined. We’d left the house at 5:30 and it was already 8:30. Time to relieve Gibbs of his duty. Bill had also worked this morning and was ready to call it a night. We enjoyed ourselves though and say goodbye. At home we watched television until 10 before the 3 of us went up to the bedroom. Gibbs would be cool enough upstairs on the bed with windows open so we gave it a try.

This was a dandy day. 😉 I hope your end of the week was as well! Thank you for your visit.

Posted by Patsy Irene (Chillin' with Patsy) at 2:37 PM