On Sunday, Oct. 3rd as if on a well-oiled schedule, we all woke around 7, automatically. We sorted the two loads of laundry and the day was underway. I made my tea and Bill carried the basket to the car for me. I was at the Mat before 8. Only one customer when I arrived, and I walked around and checked things out. I knew that the Appliance Dr. was in yesterday working on the broken machines and it was great to see they were fixed. 😉

As I was ready to dry mop the floors, the place filled up. There were 9 customers in using the machines at the same time. I wanted to pour some water into the non-flushable toilet because as I suspected, ‘someone’ in their infinite wisdom contributed to it. ☹ I texted Jamie so we could come up with a plan as we move forward. I carried on, finished drying our clothes and by then decided not to bother trying to flush the toilet and not to wash the floors. Too many feet in the way.

I filled our 5-gallon water jug before heading home. The forecast was very unpredictable so I didn’t take a chance by hanging the clothes on the line. It was nice to just put them away. There wasn’t much going on today other than I wanted to get a blog post done for Saturday. It was pretty much a blur, the whole day, so lots of pictures helped me write it. It took a long time to get it finished with a multiple of distractions.

We went out for an hour or two, Gibbs and I.  Bill was out for longer, tidying up the shed and putting hoses and the pump away. Some things have to wait longer but at least we planned where things were going to go when the serious push is on. I realized that I could’ve hung the clothes out after all, no rain until probably 3 or so. Isn’t that always the way? Back indoors, Gibbs slept a lot. The fresh air had him running like a little Tasmanian devil.

We spent some time Googling online searching for ‘snowbird transport’ companies, after reading about a couple of fellow full-timers moving forward with their plans to go south. We didn’t have a lot of luck with Ontario businesses but the weekend isn’t the time to do it either. We’ll keep searching, in the hopes of finding someone who will actually ‘drive’ our units over and keep you informed. Thank you for those of you who are concerned and hopeful for us. 😊 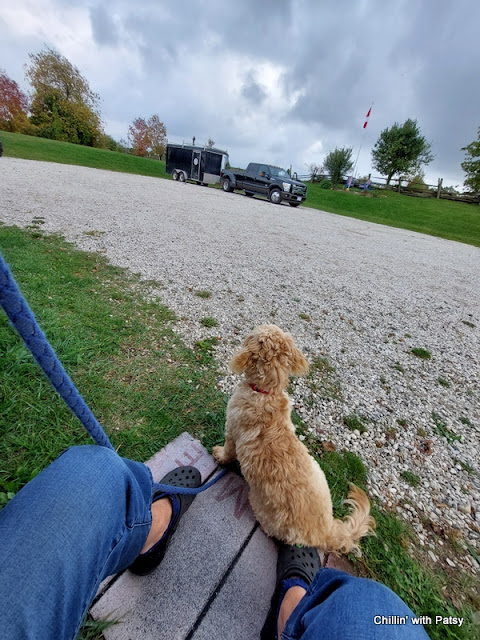 For supper, we had fish and chips with M’s banana cream pie for dessert. Yummy! He needs me to do some sanding tomorrow but it needs to be a dry day since the truck is outside.

Jamie called and confirmed that he had picked up a hasp for the restroom door. He wondered if Bill had time tomorrow night to install it for him since he won’t be home from work until late. We’ll go over, get it on and lock it up, as well as try and ‘de-clog’ the toilet. Fingers crossed because it will now only be a ‘staff’ washroom. (That’s me!) I have the sign to prove that! 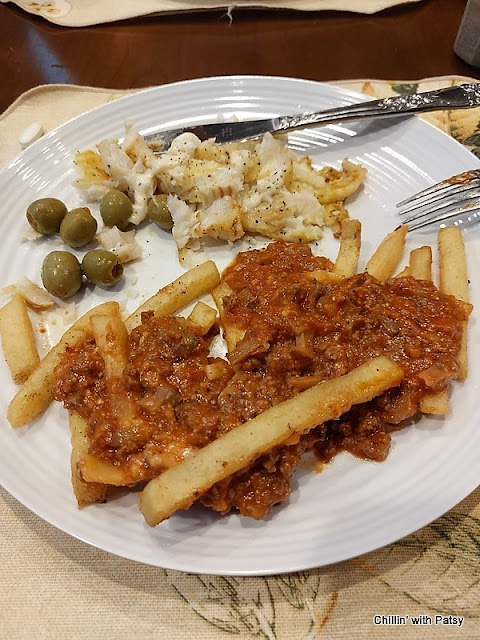 The rain was on and off throughout the evening so it will be iffy whether I work tomorrow. This was a nice day and we have clean clothes again! 😊

Posted by Patsy Irene (Chillin' with Patsy) at 6:57 PM