A Drop in Temperature, Lazy Day, An Invite to Supper

On Tuesday, Mar. 29th Gibbs and I were up at 10 to 8. It was another one of those restless nights. I was too warm to drop off to sleep at 10 my own fault for not folding the duvet down. Then waking around midnight, I was just as hot and also couldn’t stop my mind from thinking. This morning, Gibbs woke up and Bill took him out at 6:30, then he went back to sleep. 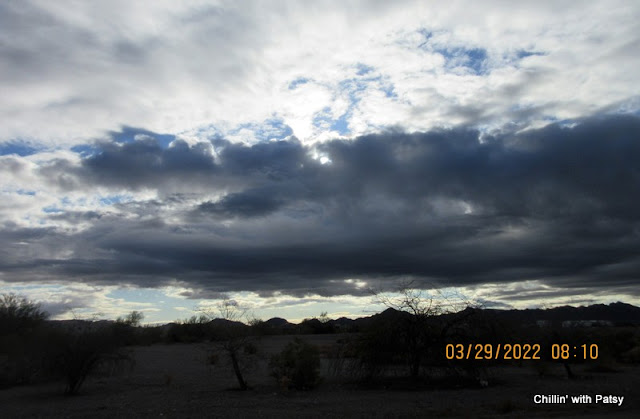 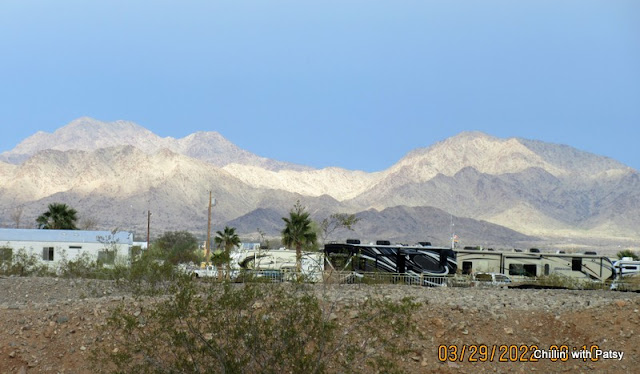 At 7:15, when he crawled onto my chest and pawed at me, I’d asked him to go back to sleep for a bit. I was very surprised he went quiet for so long. 😊 He’s such a good little gapher (when he wants to be). ♥ 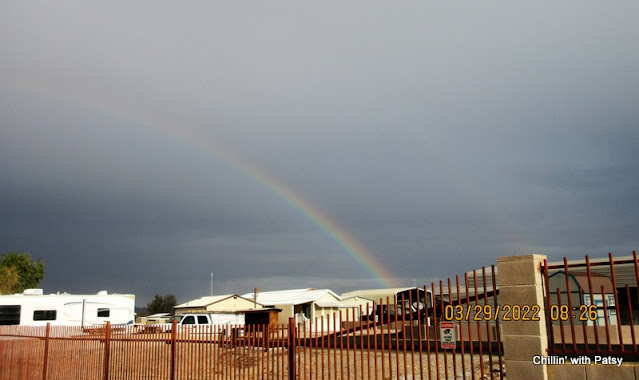 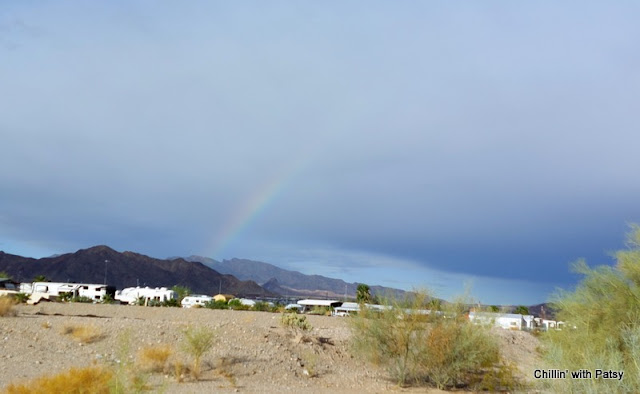 We went for our walk, leaving Bill in bed. It was the first time I’d seen a scorpion – thankfully squished on the pavement. Obviously, the rains brought him out.

It was enough to keep my eyes double peeled for more as we walked. We actually got quite a bit of rainfall in the evening and at times through the night. A lot for here, anyway. Our windows were open and at one point the wet desert smell was too much for me and I closed my side window. The walk was a nice one but I was back to wearing long pants and a jacket, it was 56F/14C. Was I ever surprised to see two ends of a rainbow when we headed out. It lasted the whole walk.

After taking care of our 2 loads of laundry, Bill and I just hung around for the day. I had no puzzle to work on, deciding against starting a new one. I packed up a few things from the coffee table and entertainment centre, in preparation for our short journey on Friday. No point in getting ahead of myself but I think we’re ready for the move to take place. 😊

After multiple checks in the mirror, I’ve so decided that I don’t like my hair cut. I  checked out a few DIY Youtube videos on how to cut a shag style. I’ve cut my own hair often and if I were home, would do it in a ♥beat but not here. I’m vain enough to know that this cut will drive me crazy if I don’t do something with it. I’ve debated calling Sandra and asking about a ‘redo’ but am a bit shy now of the result. Where’s my girlfriend, Brenda, when I need her?

We sat, dozed and read our books and at 2:30 were pleasantly surprised with another invite to supper. This one from Judy and Gary out at La Posa South. We’re assuming Gayle and John will be there as well and hating to turn down such a nice offer, responded “Sure!” I had chicken thighs out but if I don’t have to cook, all the better. I’m not keen on the drive back in the pitch black again, but hopefully we’ll get our bearings going out and look for landmarks as we drive in. 😊

We left Gibbs home at 5:30 and headed south. Gayle and John have the big table on their patio so that’s where we were eating. Judy and Gary carried a pot roast, potatoes, carrots, gravy, salad and rolls over and what a great feast it was! Everything tasted wonderful, including the chocolate cake and whipped cream. ♥ Bill and I took our own drinks as always and my beer margaritas were good with the meal.

It was before 8 when we left with thank you’s all around but not before I made a flexible ‘hair appointment’ with Judy. I wasn’t sure if she’d be up for it but when Gayle told me the other day that she was cutting her hair………….the opportunity was there. 😊 I’ll be in touch with her to set things up. NOW I’m happier! We had no problem finding our way out of the desert tonight, paying much more attention to our surroundings.

Gibbs was waiting, with his happy piddles, and we settled down to watch our recorded programs while I worked on my blog. This has been a great day with a nice break from the heat!