A Much Nicer Day with Full Sunshine

On Wednesday, Aug. 10th it was quite cool in the morning. Well, cool in comparison to what the first few days of August brought us. 😉 It was 10C/48F when we got up. No rain but really dense fog around us up here on the Ridge. The inside of Ptooties windshield was covered in condensation, so much so that I had to wipe it off with a paper towel before I could drive to town.

It was around 7:30 when I left and there was no one at the Mat. A regular customer came in soon after and then Kaitlyn walked in after half an hour. She was rearranging things in the storage room/office and making charts to number all of the machines. This will help when they have the appliance repair guy come in if they’re not there. We discussed where to place them on the machines and the size and a few other things they want to do.

To test a machine that was reported to not do the spin cycle I emptied the Lost and Found box (again) and washed the sellable/saleable (?) items. It is working fine today so I dried and bagged them before I left. Kaitlyn was still puttering around. I’m thinking this laundromat purchase was more her ‘hobby’ than her husbands, but I could be wrong. 😊 We get along very well with plenty of humour involved.

Back home, Bill, Ken and George had gone to the flying field so after some cereal, I went to the Bunky to work on the puzzle. Rose joined later and we plugged away at the most difficult sky pieces. It will be done either today or tomorrow, I’m sure. Kim and Rose mentioned a ‘paint party’ so maybe we’ll get the paints out when it is finished. When the boys returned close to 1 pm, us gals had mostly gone inside for lunch. No waiting, my tummy was growling for food!

After I ate and then Bill ate, he snoozed and I went out with Gibbs. Back to the puzzle. There was no decision to go anywhere today so we all just ‘chilled’ until Happy Hour. We gathered around 4:30 and moved between sun and shade, depending on our own desires. A few minutes after 6 we clued in to the time and I knew our chicken breasts would take a bit of time so turned the convection oven on to preheat. 😊

With the chicken, boiled potatoes and mixed veggies, we had a full meal. In between cooking, I worked a bit more on the puzzle and on my blog post for the day. It sure warmed up outside and with a nice breeze, it was quite comfortable. Thought I should We’ll be having another cool night but it will be good for sleeping. Our supper will be late tonight, but we’ll be ready for it!

Gibbs and Gigi were hard at it again today although I think they are learning to slow down a bit more. When they are both outside, we don’t worry about them wandering off. When we call one, they both come. If Gigi comes first, Gibbs isn’t far behind. ♥ I think it’s love. ♥ Gibbs wouldn’t come inside with Bill, instead he laid outside and waited for me to come. He has been eating more regular these days and we’re trying to understand. Is it because Bill is home? Too funny.Supper was very good and we were hungry for it. We washed the pots by hand and loaded the rest in the washer. It was 7:45 by the time we finished. I thought I should keep up my good record and get my blog post completed tonight so I sat to do that but was distracted when Bill went out to the Hangar. 😊 He called back to me to not let Gibbs out. I didn’t hear what it was but something had all the guys bustling down the hill. It turns out to be a porcupine, and he wobbled down to the tree in the corral, continuing to climb almost to the very top. Wow! He’s huge! That is only the second live one I’ve seen in my lifetime. He stayed put so we left him alone. I really would like to see him move on down the road so I know he isn’t around our place. ☹ It is starting to get dark now at 10 to 9 and he is moving around up there ever so slowly. I’m sure he’ll be gone by morning, somewhere. LOL We’ve enjoyed this wonderful day with our friends.

As I worked on my post, with Gibbs on my chair behind me, he sat on my lap and proceeded to go to sleep on my hand. He's so tired these days! 💗 We’ve been following a few items on the Rockford auction today as it closes this evening. I lost out on my bid but Bill was successful. 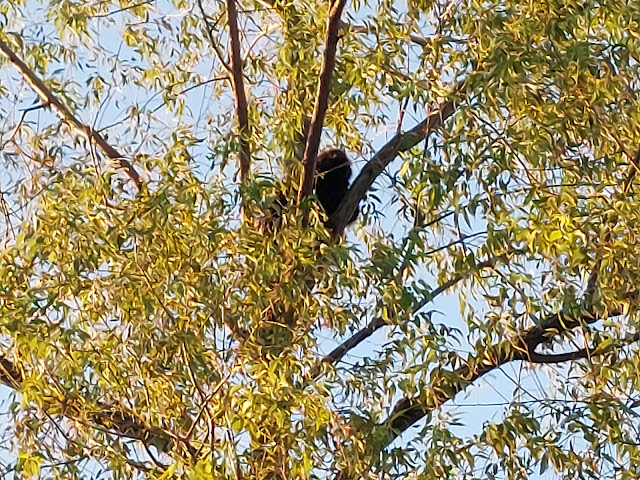 Posted by Patsy Irene (Chillin' with Patsy) at 7:57 PM