Where Did Friday Go?

Friday, Aug. 20th is a bit of a blur. I had no scheduled work other than shopping for the household but it still seems to have flown by. 😊 I guess it was good though, since we are both still here and in good health and spirits.  Bill was up and off to work by 7:30 and shortly after 9 (?) I was on my way in to Hanover for groceries.

It was a beautiful day from beginning to end, the temperatures rising from the early morning 12C/54F up to a perfect 26C/79F. I say perfect because even though we had high humidity, there was a lovely breeze throughout the day to keep us refreshed. Shopping is never on my ‘don’t like to do’ list but as I mentioned on Bob’s post, it is tiring.

Today was no different, I started at Dollarama for a couple of things and to check out their food items (unsuccessfully), then Giant Tiger where I did find a couple of things on the grocery list. I was looking for canned or jarred pre-made bean salad and wasn’t having the luck I had hoped for.  I checked out a total of 4 stores with everything BUT the salad. 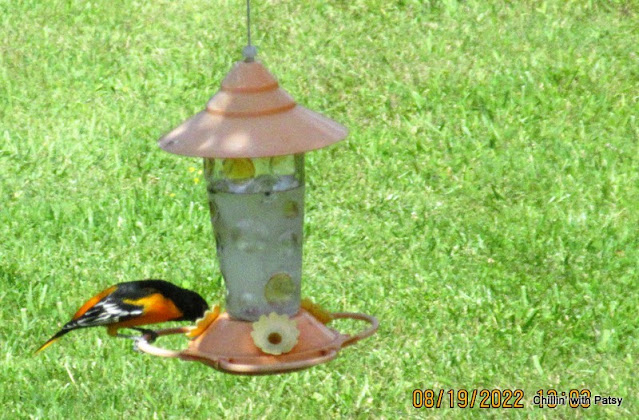 Saturday is a Family Fun Fly day for Bill’s club and it’s potluck. After texting back and forth with Donna, I decided to just buy the cans of beans and make it myself. Since it isn’t a favourite of mine, I didn’t want to have a lot left over and thought I could open the cans only when needed.

By the time I returned home, 2 ½ hours later (!), the morning was shot and Bill was home from work. Nice for a Friday for him to be off early. 😊 We had lunch of bacon and eggs and I vowed to spend the rest of the day ‘chillin’. I guess we did that, mostly, Bill worked in his Hangar getting batteries charged for the day tomorrow, in case he wanted to fly. He doesn’t always on these event days but I think he is confident enough now that he will.

Gibbs and I lazed about, I watered all my potted plants by using our water pump system and I’m still so thrilled to have that working. I added rain water to Gibbs’ and my little pool but he wasn’t in the mood for a swim, instead sitting beside me while I sat with my feet in the cool water. He did drink from it occasionally but didn’t get in at all. Funny guy. He was on his rope leash though, so maybe that deterred him.

I put the complete turtle puzzle away and set another one on the table but didn’t get into it – yet. The rest of the day was just spent by watching the birds. I’m amazed at the number of chickadees, hummers and now orioles frequenting the feeders. There was an online auction closing today and I’d bid on an item that was I was also watching. Supper at 6 was smokie sausages on a bun and we finished the package. I like them but Bill isn’t as keen. He likes normal sausages. 😊

After we were cleaned up from that meal, we drove over to the Acreage for a campfire. Just the adults, Gibbs stayed home to watch over things. No, he wasn’t happy to be left behind but we wanted to just relax. And we did. It was a perfect fire night and we enjoyed just relaxing with Donna and Gerry before heading home around 11. Gibbs and I went straight to bed and after some banking, Bill joined us. Yup! Another wonderful day!

Posted by Patsy Irene (Chillin' with Patsy) at 5:05 PM