On Saturday, Aug. 20th I was up and out the door to clean and do our laundry by 7 o’clock. Bill was getting ready to leave for his day at the Saugeen Flyers club. He would be gone by the time I returned, with Black Beauty and the cargo trailer. He has been looking forward to it. 😊 I try to go for at least one of these events but this is where I get a bit shy. I have only met 3 of the guys and certainly don’t know their wives but as Bill says, what better way to get to know them?

So, after cleaning and getting our 2 loads washed, I left Kaitlyn a note about how nice the numbers on the machines look. She is proud of this venture and already has made improvements. No slight to Jamie, he has his hands full and she has taken this on as a bit of a hobby. With the boys at day camp all this week, she has had time to putter in there and I’ve noticed a huge difference.

Back home, I spent time with Gibbs and we went for a walk down the road and into the front field. No turtles on the log today but Gibbs found a few places in the grass where he just had to lay and roll around. The scent of another critter, no doubt. ♥ Such a little goof! Then we played around the pool and he decided to jump in today to get his drinks. From one day to the next, he differs in his antics. 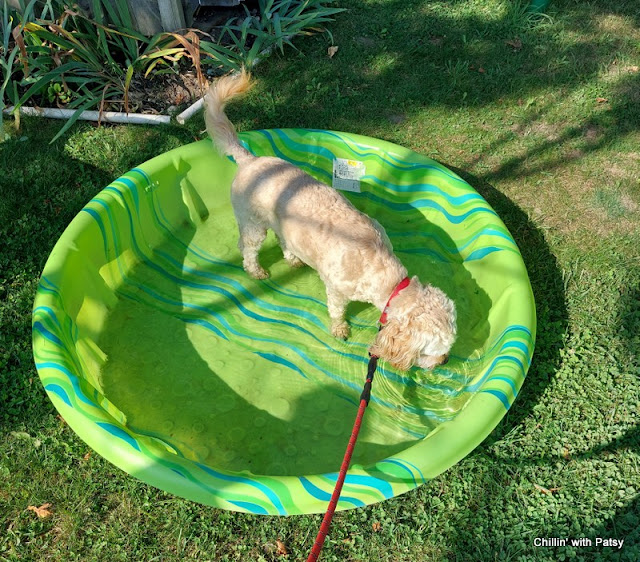 I packed the bean salad, drinks and place settings for both of us full well expecting Gibbs to start whining about me leaving. When I didn’t hear a peep and told him I was going to work (my nose grew a bit at the white lie), he gratefully took his peanut butter bone and sat in my chair to watch me leave. ♥♥♥ He melts my heart when he is so good. 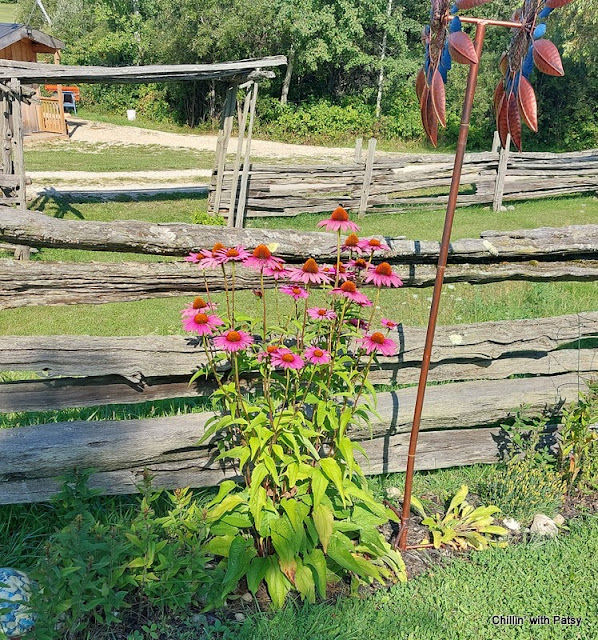 I arrived at the flying field around 11, as planned and boy was it hot. Bill refreshed my memory with the guys names and eventually I met their wives. One, in particular, Peter’s wife, Linda, came over and sat with me. We hit it off quite well and enjoyed an hour or so together. There were a variety of planes being flown, different sizes, but mainly by the same 3, 4 including Bill, flyers. Craig, Al and Dave are awesome pilots and they all have deep pockets.

I saw 3 or 4 identical planes amongst them all. They went up together and once they did a show of ‘dog fighting’ (I think it’s called) to the ‘death’. Ha ha. Three small planes, that have seen better days, first flew with the goal of removing their opponents crepe paper streamers and then to eventually crash for the title. That act ended up happening at the same time and Craig was the victor. The other two ended up in the bean field in pieces. No worries, they have more where that came from! 😊

The club barbecued cheeseburgers and members (wives) provided salads etc. to supplement. It was good and although I brought a lot of the bean salad home, it wasn’t ignored. There were only about 20 people in attendance and some didn’t even eat. It’s a small club of about 42 members so not a bad turn out really.

We sat under Bill’s canopy and around 2, I packed up my chair and headed back to Gibbs. Bill wasn’t too far behind me, returning around 3:30.

I’d eaten more than Bill, he skipped the dessert of mousse and cookies, so he had a toasted tomato sandwich while I just had a piece of toast and peanut butter. It hit the small hole, especially with the last of the angel food cake with peach slices and whipped topping. ♥ I sat after supper and posted my delayed blog post from yesterday and then worked on todays. Bill went to the Hangar.

The sky to the west is looking dark so maybe we will be getting some storm/rain tonight. Tomorrow sounds like a washout so it will be a Bunky/Hangar/Suite day. 😊 This was a nice day.