Heat and Humidity, New Arrivals and Gibbs and Giji

On Sunday, Aug. 7th it was nice to remain in bed without thinking of the time. Bill was up, getting ready to go flying. Gibbs and I got up around 7 and went for a short walk. Before we even got to the corner, he turned around for home. Okay by me! It was gearing up for another hot, humid day but with rain expected later. Bill was at the Hangar when we returned so we said goodbye and he and Ken headed out around 7:30.

Before I made my tea, I had a brief feeling of light-headedness so just sat with Gibbs in my chair and put my head back. Later, Bill suggested that it was probably the heat and walking as soon as I got up. Oh well, within 10 minutes, I was fine and had my tea beside me while ‘we’ worked on Wordle etc. 😊 I had a blog to finish from yesterday so worked on that and got it posted.

Unfortunately, a few minutes later, all of my writing and pictures had disappeared. ?? That was weird. Kim had read it, along with my cousin up north, so I knew it had originally worked but now it was 98% gone. ☹ I left it alone for now and perused some pages of a new online auction at 6 on 6. I was actually just avoiding going out in the heat and I knew Kim wasn’t out anyway. We both had our a/c running.

Bill and Ken returned around 11 and Bill came in and snoozed with Gibbs while I finished. As I was online, Rose messaged that they were on their way, 10 minutes out. Yay! A third visiting rv. I’d begun to get things out of the fridge for lunch but went out with the rest to greet our guests. Wow, that motor home is sure big! You don’t realize it until you are up on a small space, instead of out in the open desert. George got backed in behind the Wilson’s Journey like a pro and we came in to eat.

Giji is their ‘new’ shepherd and she is bigger but just as friendly as I remembered from last winter. I let Gibbs out and you couldn’t ask for a better reunion. ♥ It is always cute watching two compatible pooches playing together so well. The rest of the day was spent sitting outside catching up and more stories were told all around. At 6, we went our separate ways for supper and just in time because the black clouds finally produced rain.

It felt good as we meandered back to our rv’s but I had to snap a picture of Kim who didn’t want to come in out of the rain. It was that hot today. As the rain got harder, she made her way inside their home. 😊 We had some thunder, lightning and gusty winds for a short but productive period of time. Plants should be happy now, again. 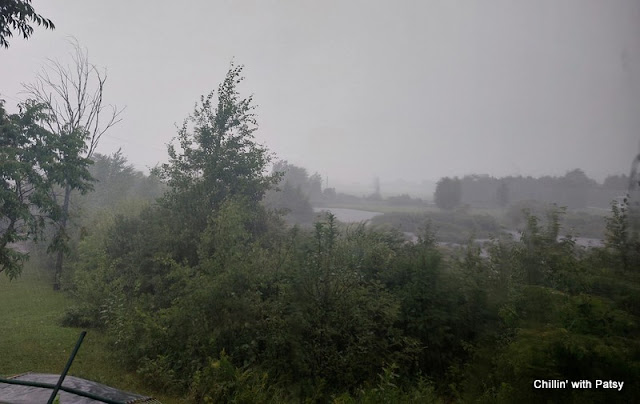 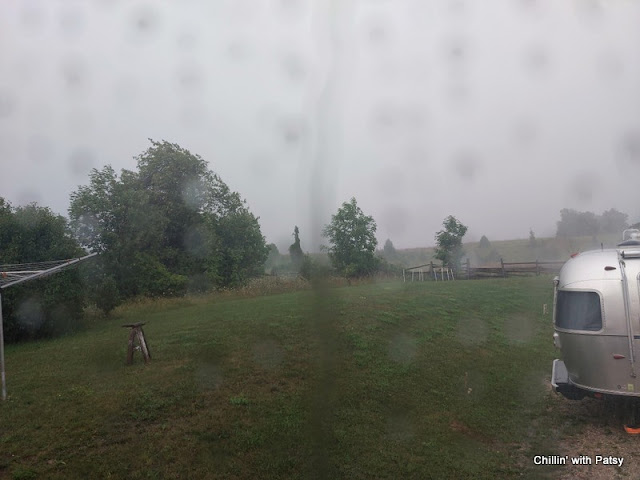 We had leftover meatloaf, corn on the cob and cherry pie for supper and remained indoors for the rest of the night. The heat seemingly takes a toll on me and I felt exhausted from doing NOTHING!

Another wonderful day and we’re glad Rose, George and Giji were able to join us. Oh! It was also nice to chat with Loree today and we wish her well on the 11th. ♥

Thank you for your visit! (I hope this one posts properly)

Posted by Patsy Irene (Chillin' with Patsy) at 6:53 PM