On Tuesday, Aug. 23rd Bill was up at his normal time and I got up shortly after 7. For some reason last night, I was soooo tired. I could have fallen asleep at my laptop so closed it early and sat in my recliner for a while. Nope, at 8:30 I went upstairs to watch Leap Year from bed. Then if I fell asleep, no big deal. Gibbs joined me but was soon on the cool floor. 😊

Of course, upstairs, other than dropping off during a movie I like but have seen many times, I stayed awake until 11. I had switched to Bachlorette. I know it’s a stupid concept show but I still want to see it to the end. I know it didn’t take long after lights out and Bill had already crawled up with us. Another bunch of dreams had me busy all night. LOL

This morning, he got word from Billy that they really had no work today. The problem is that their boss, Mike, is currently in the hospital going through some testing. With a few jobs on the back burner waiting for different things to become available, they are on hold. I believe tomorrow things open up and a lift will be available for them to finish an in-town job. We all hope. This isn’t a pleasant place to work because of the owner’s changing demands. ☹

Anyway, I went to work at M’s for 9:30 but that was after Bill took Ptooties to Barrie to the hobby store. He’s been looking for some pieces for his plane building and not having much luck. It was a perfect time for him to go. It’s about an hour and a half so I hope the fog had cleared for him as he drove. At M’s, I worked in the apartment. It has been reposted on Kijiji as that again, rather than 2 ‘rooms’ and within 15 minutes, he had a call. 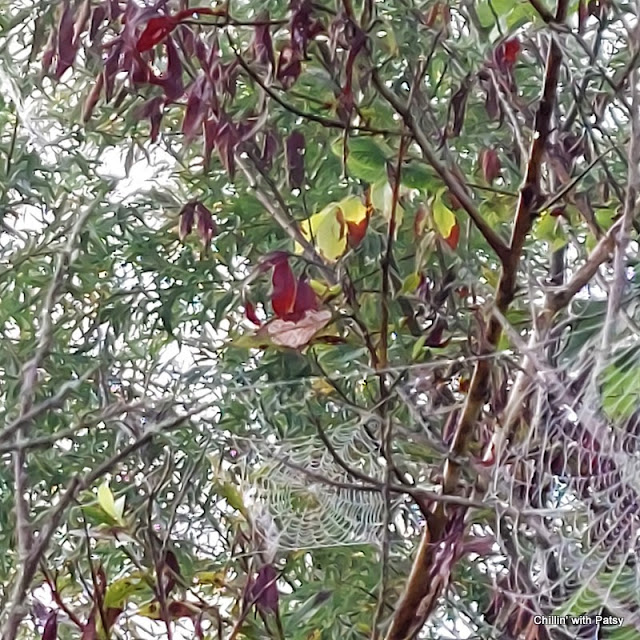 With possible tenants coming on Thursday to see it, I needed to finish painting the kitchen and bathroom walls. Plywood does not cover well but I persevered with 3 coats and it looked half decent. That took the whole 3 hours of my shift and I headed out with my cash. I think one more coat on the upper half of the wall will do it justice and the paint can be put away. I hope these tenants pan out and they can move in at the end of the month if not sooner.

Back home, Bill and Gibbs were on the patio waiting. We are still trying to get Gibbs settled down as far as barking. His excitement when we or anyone comes in the lane but we are really trying to avoid getting a bark collar. Anyway, the verdict is still out on that subject. We both need to dedicate ourselves to keeping the same response when he starts barking. He seems better some days but then others, he is off the charts.

We had lunch and Bill dumped our black tank before going to the Hangar for a few hours before supper. I noticed one of our fresh peaches was going soft so I made a peach pie. We still have some apple crisp left but a change is as good as a rest so we’ll see what we have tonight. I used sweetener in the pie and it’s a shortbread premade crust that I’d bought in Quartzsite.

It’s turned into another hot day but after the rains from the previous days, things are very green, my garden plants and the grasses are growing like crazy. My eggplants have flowers on them now so that is encouraging. I can’t wait to see what they produce! After starting my post, Gibbs and I went outside so I could work in the Bunky on the puzzle. I worked on the snowy sky the other day until I got stuck. Today, I worked on the snowy ground and got stumped again. 😉 That's what snow does to me!

I can't figure why lately my videos won't load. This is a really short one. :(

For supper, we had grilled bacon cheeseburgers, bean salad and finished off the apple crisp with some ice cream. That takes a big dish out of the fridge so that is always nice. Don’t think I don’t appreciate the fact that we have a working refrigerator. At least once a week I think about when we didn’t have it and I’m so grateful. I know our friends have not been so fortunate and I feel a pang of guilt when I think of how they’re faring. ☹

Bill made his lunch and then went back to the Hangar. I went out to work on my puzzle a bit more before dark and then closed the Bunky up. I’m not like Bill, walking outside in the dark. I agree with a blogger friend when she commented on how it is getting dark earlier. It’s too soon but then……..well, it means travel plans will soon be in place. ♥

This was a lovely day and I hope yours was as well. Thank you for popping in!

Email ThisBlogThis!Share to TwitterShare to FacebookShare to Pinterest
Labels: Bill gets a day off, nature, puzzles
Location: Priceville, ON N0C 1K0, Canada