Tired of the Heat Yet? Haircut = New Puppy?

On Tuesday, Aug. 24th Bill left for Durham around 7:15. They are working at a duplex apartment close to home today. That’s nice. I left soon after to clean the Mat and arrived to find just one customer inside. Other than finding a complete outfit in the washroom (leggings, bra, under garment, top) things weren’t too bad. Oh, that’s if you disregard the folding pocket knife I found wrapped in a tank top in a washer. Good grief!

Let's start the blog with pics of

Gibbs trying to jump up on the chair

I put the clothing in the Lost and Found box and locked the knife up in the keyed box in our lock up room. I should have taken a picture but I was a bit in shock at finding it. It looks new and definitely looks like something a lady, er, female would carry. The customer told me that when he arrived at 7, there was someone sleeping in the chairs at the front and that she got up and left when he brought his clothes in.

After he left, I wanted to finish up the floors and leave myself. I didn’t want her coming back questioning about her stuff. I drove straight home, there were other things to do today. I had a tea, sitting with Gibbs and we passed the time inside and outside. I had a shower while he kept watch at the shower doors. Funny guy. Today, he learned how to jump up on our recliners. His sock toy was his goal.

At one point, sitting outside, he had one of his crazy ‘runaround’ moments and hopped right in the pool using his paws to splash the water! I was getting such joy out of watching his antics even though I knew he’d be a wet, dirty mess. 😊

He was having fun splashing in the pool

I had to dry him off in the next 30 minutes as he had a grooming appointment at 11:30 with Kate. I dropped him off and spun around town to where Bill and the boys were working. Bill came out to meet me and I told him I’d decided to go to Hanover today for the few items we needed instead of tomorrow. Kate said it would be close to 2 hours so I had lots of time. At Walmart, I was in and out within 15 minutes so drove to Giant Tiger just down the road. I love this store and hadn’t been in in a while.

When I left Hanover, I knew I’d still be too early to pick up our pooch but parked on the main street across from Bath and Biscuit to wait. At 1:15, I walked in to see how close to being finished he was. Just finishing, Kate had him in her arms.  I hardly recognized our little bum! No longer a furry pooch, just a soft sweet looking little Gibbs. 😊

We drove home and relaxed for half hour before I had to leave for M’s. I was going to deadhead the flowers again as well as watch the Yard Sale. Gibbs is being really good, on his own in the Suite, so I don’t feel bad about leaving him alone. He takes a treat and waits for me to leave. M left a few minutes after I arrived. Thank heavens for the breeze as it meant the job wasn’t near as bad as the hour that I spent on Saturday afternoon doing the same job. M returned within an hour and a half from his appointment and after helping him move some of the tables, I drove home. I was very hot and the thought of another shower, a cooler one this time, sounded good. 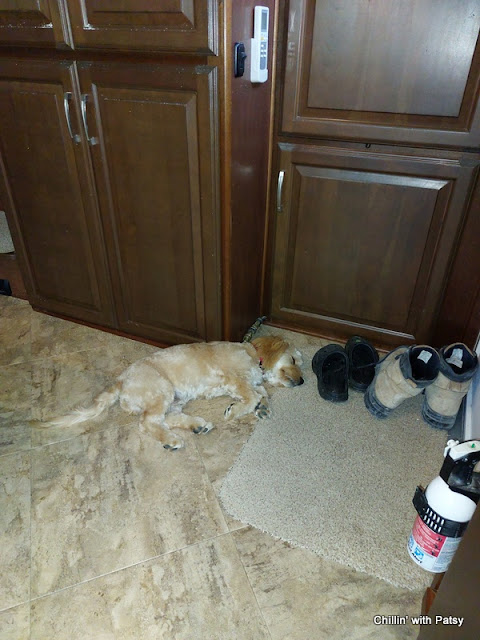 It was close to 4 and I expected Bill home at any time. I wanted to see his face when he saw Gibbs so I just changed into cooler clothes and skipped the shower.  It was around 4:30 when Bill walked in and he was just as thrilled and surprised with Kate’s job as I was. I don’t know how she does it, but we both agree that she is worth every penny! For supper, we had bbq’d burgers and nothing else. It was enough.

Bill went out to cut some grass and I did the dishes and made his lunch for tomorrow. They will be working back in town again for at least one more day. I worked on my blog but my eyes felt so heavy so it will be a miracle if it gets posted on Tuesday night. I can say that this has been a busy but very good day. We are so happy to have Gibbs groomed where he will definitely be more comfortable. I’ve made his next appointment for the end of October, getting spiffed for our travels. See how positive I am? 😊

Thank you for taking the time to see what we’re up to today.