Weekend Around the Corner

On Thursday, Aug. 26th, I woke to hear Bill pulling the blankets up on his side. I was facing the window so wasn’t sure what time it was or if he was coming back to bed. I dropped off again when I remembered that he was getting up at 5:30. I didn’t have to! Next thing I felt was a lovable cuddle around my neck. Gibbs! Even though Bill tells him to leave me alone, he wants to give me a morning kiss. 😊 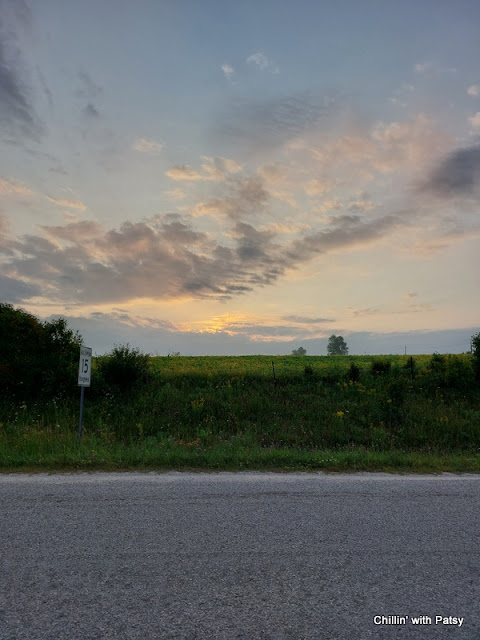 He has been sleeping downstairs on his own every night, with the door closed, and we haven’t had an accident nor heard a peep from him. I do like that he comes up with me while Bill gets ready for work though. Bill said he had an interrupted sleep last night but it was because he felt hot and regretted turning the a/c on up there. I have my window open but it is close to my face, so I slept well.

After he left at 6:30 for Mildmay to meet Mike, Gibbs and I relaxed until I had to leave for work at 7:15. The day was looking cloudy but as I drove to Durham, the sky was giving me glimpses of a more promising day. The forecast was for possibility of rain again and I would welcome it. My flowers need something to drink and if I don’t have to provide it, all the better. The pump system has had a setback. ☹

When I finished cleaning the Mat, with no interruptions at all, I drove to the Police station and dropped off the jack knife that I’d found on Tuesday. The receptionist wasn’t surprised that I wanted to get rid of it. It was pretty, that’s the only positive thing I can say about it. LOL

Back home, I had my tea, fed Gibbs and worked away at my puzzle. I was getting frustrated with it, but only one puzzle in my lifetime has got the better of me so I wasn’t giving up on this one.

The day was pretty quiet, another hot one, and Gibbs and I spent much of it indoors again. I did keep an eye on Mona as she was about to eclose; her chrysalis turned black overnight and her wings were visible. I knew it would happen soon and Donna confirmed that for me so I brought the container into the Suite. Soon enough, I watched Mona make an appearance. It took quite a while and I took several video clips of the process. Pretty amazing!!

Now, as a beautiful butterfly, I waited for her wings to open up but there seemed to be a problem. I didn’t know how long it would take but it was like she couldn’t unfurl them. It’s sad because she dropped the 2” from her casing and the stick I’d put inside and then didn’t seem to be able to move anything other than her antennae. ☹ I felt really bad and still do, after all her work! Donna said to leave her overnight outside and see if she survives until morning. I’m not feeling very positive.

Bill was home early, around 2:15 and he had stopped at the Acreage for a bladder of water. For supper, he bbq’d Italian sausage and I cooked 2 cobs of corn inside. It wasn’t much of a meal but it was filling and we could have dessert later.

Bill went out to finish cutting the front field and I did the dishes. Gibbs and I sat in the hammock, okay, we laid in the hammock, and waited for him to finish. Gibbs got quite excited when he saw Bill come up on the mower to the corral. 😊 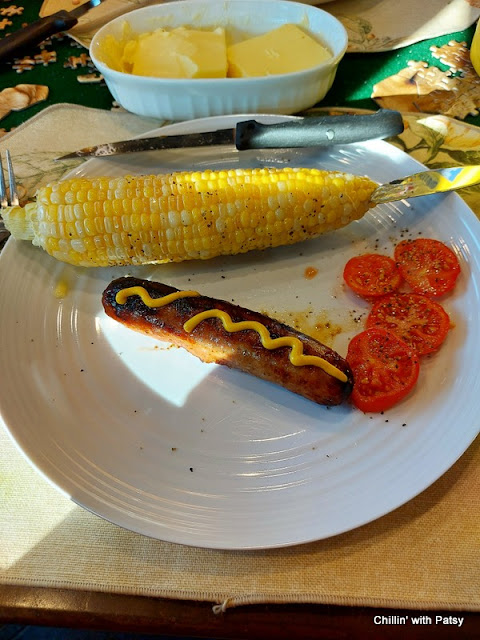 After we came in, we spent a quiet evening together until bed time. I worked on my blog and the puzzle. Neither got finished tonight. This was a good day.

Thank you for stopping around. Comments are always welcome.
Posted by Patsy Irene (Chillin' with Patsy) at 6:53 AM