Bill Gets an Early Start, Walking with Gibbs, Baking

On Saturday, Aug. 7th, Bill was up at 5 and took Gibbs out for his business. It was early so he brought him back to bed. I knew he was pulling out with the cargo trailer around 6 so had no plans to get up to see him off. He crawled across the bed for a ‘goodbye, I love you, drive safe and have a good day’ kiss. 😊 Jam-packed in other words.

We, the lazy bones, didn’t get up until almost 7 but it was more resting than sleeping on my part. It is nice to just cuddle with the little fur baby. I was watching a dog training program last night and understand that it is against ALL training rules (Laws?) to bring your dog into bed with you but too bad, Bill and I say. They are special moments for us as puppy owners and unless it is imperative that Gibbs sleep in his crate (for a personal or health reason), he will have a place in our King bed.

Gibbs and I left the Suite for our walk around 7:00 and turned around at Turbine Lane. It was a beautiful day, not real sunny but it was already 18C/67F or thereabouts. First time that I’ve wore shorts and my bright yellow windbreaker over a tank top. The windbreaker was not really necessary although as I turned onto Baptist Church Road, the wind did pick up. It is more to be noticed than anything.

He had his breakfast when we returned and then slept while I worked on my blog. I wanted to finish it last night but I couldn’t download pictures from my camera. It kept saying that my ‘power surge on the camera was not strong enough to blah blah blah’. I got frustrated after several tries and closed my laptop. Bill and I watched something on tv together until I couldn’t keep my eyes open any longer and went up to bed at 10. He followed soon after because of his early morning today. 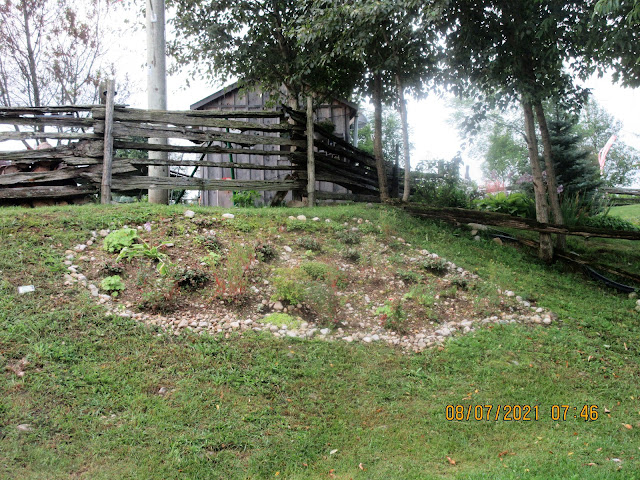 I thought it was time to do some cleaning so I got out my Norwex products and did the high dusting first, which included the tops of the cupboards and slideouts. It also included the dirty fan blades. Then I did the low dusting which also included the floors to clean up the mess I made. 😃  I used the dust mitt, dry, to not only wipe the inside screen windows but also the daytime blinds that we have in the Suite. I noticed the other day just how dirty they get too. I love the products and the ease of working with them. I have some face cloths to pick up from Gayle that I ordered and Donna's virtual party begins next weekend.

The outside temperature increased to 25C/77F according to my weather network but our outdoor thermometer was reading 88F. Hmm, that’s quite a difference and usually that location of the thermometer is bang on. Oh well, the a/c is running and it is likely warmer inside because I decided to bake more of my keto butter tarts. For me. Bill doesn’t care for them, remember? Maybe I need to bake cookies for him.

I had my shower after lunch, which was the reheated casserole, and then began baking. Oh, somewhere in there, Gibbs sat on my lap with a chewy and I finished the last 3 chapters of my book. It was awesome! Kept twisting and turning so I highly recommend it if you enjoy a detective type of story. 😊 I did the dishes while the tarts were baking. The almond flour dough was more of a challenge today but it pieces together better than regular dough so it didn’t upset me.

At a few minutes before 2, I got a text from Bill that he was leaving the flying field. Wow! I was surprised that their Fun Fly was over already. He would be home for supper so that answered that question. I’ve learned never to count on any particular time, trusting that he’ll let me know when he’s on his way. I guess we’ll be having fish and chips for supper tonight. That’s easy!

Bill was home at 4:30. At 4:25, the first rain of the day hit and he pulled up to the top of the Ridge and just ran for the Suite. He would have been wet had he stopped to grab his camera and cooler. It was nice that he was home earlier than I expected. We both had a headache for some reason so all 3 of us went upstairs to lay down for half hour before supper. That didn’t work out for me, so Gibbs and I came downstairs and sat in my recliner. Bill had a wee doze at least after his drive.

We had our meal, Bill had mostly fries with his fish and he put a few on my plate with my veggies. 😊 I really didn’t need any, I’d eaten enough carbs today but they gave me a taste regardless. After dishes, the rain had stopped and Bill went out to park his trailer down by the Hangar. It was still very humid out there and maybe that is where the headaches came from. Mine was lessened after eating which was good.

I've started a new book, just barely into it.  It’s called Sold on a Monday by Kristina McMorris and I have a feeling that it will be a ‘heart’ jerker. It’s time for one of those. This morning I spent some time reading my beginning blog posts back in 2014. That was actually quite fun. I was drawn to them while looking for old family pictures with Bill’s father. I may do that again.

This was a nice quiet day. Gibbs was good at home with Mom and a new chewy that lasted most of the day. After supper, he was a little wild ‘man’, tearing around with our shoes, running around the island and barking. Methinks he didn’t get enough outside exercise today! We try hard to be firm but hide our chuckles at some of his antics. LOL his ‘puppy’ was showing! By 7:30, the next bout of black skies headed our way and the thunder followed. I turned the a/c off as it seemed to be bringing in some cooler air. 😊 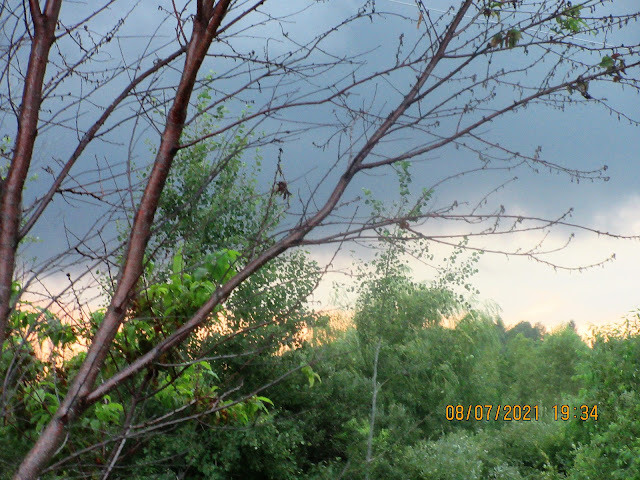