On Tuesday, May 3rd, we didn’t get up until 7:15. Without moving too much, earlier, I whispered “Happy Anniversary, Sweetie”. I was trying not to get Gibbs too excited as he takes our talking as time to wake up and play. 😊 I wouldn’t trade the little gapher for the world. Oh, and I wouldn’t trade my big gapher either, it took me too long to find him! ♥ Yes, today, we made it to 25 years of marriage!

So, in the title I mentioned the Big Squeeze. My first one was from Bill and the second one was after a drive to Hanover for a 9 am mammogram. Yeouch! Well, no not really. I have found them to be as uncomfortable as all the jokes and stories make them out to be. Tammy was very sweet, as they all are, in handling my ‘things’. 😊 Sorry, I had to say that! It all took 30 minutes or less from parking in the lot to driving out of it. That meant I didn’t have to pay the $3 fee.

From there, I drove to Dollarama and picked up a few things that would be cheaper than if I’d bought them at Walmart. Gibbs has managed to chew two of his leashes into oblivion – almost. So, he got new ones today so he can start over. 😊 Actually, he doesn’t get the same opportunity to chew them now that he is mostly off leash up here. Then I drove to Walmart and bought just the basics that we need for the week.

I made a 10-minute stop at M’s around the corner to send one more email for him. He’s terrible at attaching pictures and it was important. Back home, Bill hadn’t returned. He had a check over appointment for Black Beauty at the same time so it was when I was sweeping our stoop off that he pulled in. Gibbs was outside and ran down to meet him. With me outside, he was pretty good and Bill drove slowly, both of us watching. The little guy tends to run around and around and around the moving vehicle. ☹

We came in and my job was to update the framed ‘poster’ that I made for Bill a few years ago. I don’t remember when I started it. Bill worked on the Wordle and WordHurdle games on my phone while I did that. We did well, guessing them both in 3 tries. He made a sandwich but I only had cheese and some avocado for lunch. I’d had a granola nut bar on the way home so wasn’t hungry.

I thought that I might plant my dahlia and gladiola bulbs today but I felt chilly outside so instead got my sewing machine out. There were a couple of things needed to be sewn so I took care of those and put it back in the closet. It goes with us all winter and even though it never got used this winter, I have no regrets taking it along.

The rest of our special day went by like any other day. Bill down in the Hangar and Gibbs and I up in the Suite. Good place to be with the drizzle going on out there. Our fridge repair people are coming back Thursday afternoon but I’m not feeling too positive about any of that anymore. Day by day, we’ll play it out. Instead, we focused on celebrating, so, we got dressed up and a few minutes after 6, left Gibbs in charge of the house.

Chuck’s Roadhouse Bar & Grill is a typical sports/grill type restaurant but we sat on the ‘non-sports’ side and had a fairly quiet booth. Their food is always great and you get your money’s worth. We’d decided to skip the alcoholic drink tonight both still feeling the effects of our colds and had a nice hot cup of tea. 😊 We have all summer to have the hard stuff. 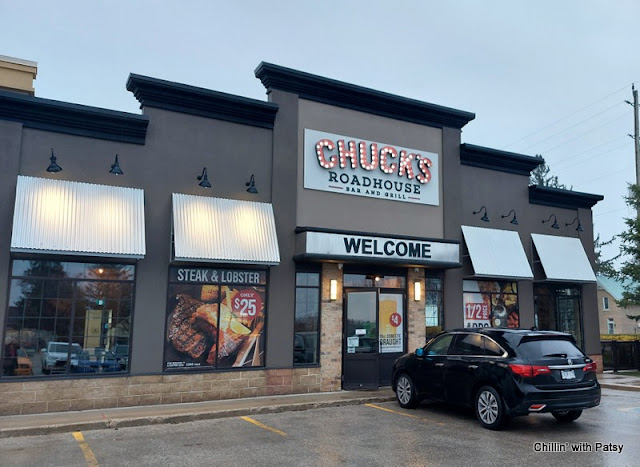 Bill ordered fish and chips and I stepped completely out of my norm and ordered 2 fish tacos with fries. Oh, my goodness! Everything was so good and I will order these again. I only ate one with my fries and brought the second one home so I would have room for dessert.

Skip the drink and order the divine! Ha ha. We each had the bread pudding with walnuts and toffee/brown sugar sauce topped with ice cream. I came close but couldn’t quite finish mine. Bill had no problem. ♥

It wasn’t a very nice day but weather doesn’t come on demand. It was a similar day but a tad bit warmer than our actual wedding day 25 years ago. We watched recorded episodes of 9-1-1 and 9-1-1 Lone Star and I chose to cuddle with my sweeties rather than finish my post. Today, I got my Afghan out and worked on it for a while, a good indoor project. 😊

Thank you for all the anniversary wishes on Facebook and for your visit here. ♥

Posted by Patsy Irene (Chillin' with Patsy) at 7:27 AM