Earning my Keep, No Longer a Kept Woman ♥

Monday, May 9th arrived without fanfare and it was another gorgeous day. Warmer by a few degrees than yesterday. Gibbs and I stayed in bed until after Bill left at 6:45. He took the garbage down with him and it wasn’t until 7:45 that we got up. He had to be at Mike’s for 7:30 to catch the ride with Billy in the work truck. It saves a few miles on Ptooties. They are working two jobs right now so I never sure exactly where they’ll be but I don't necessarily need to know either. 😊

Gibbs wouldn’t eat his breakfast again, it must upset him something awful when Daddy leaves. There is nothing I can do to encourage it but he seems active and I rely on the fact that when he’s hungry, he’ll eat. He also isn’t fading away into skin and bones either! I tried him off leash when we went outside at 10:30 but within 15 minutes, he was avoiding my calls to ‘come’ so I deked him out by getting into the truck. He came at a run and I carried him over to his rope leash near my shed.

He doesn’t seem to mind the leash, I guess he has been on it all winter so that’s helpful. No whining or barking when I walk away and out of sight. I sat in my shed and went through the craft unit that Bill brought out from the closet in the Suite. It was a weighty thing that doesn’t need to go south with us this winter. We needed the space in there for the shelf Bill is building for our printer. I have a lot of little projects for when I’m ‘old and gray’. 😊 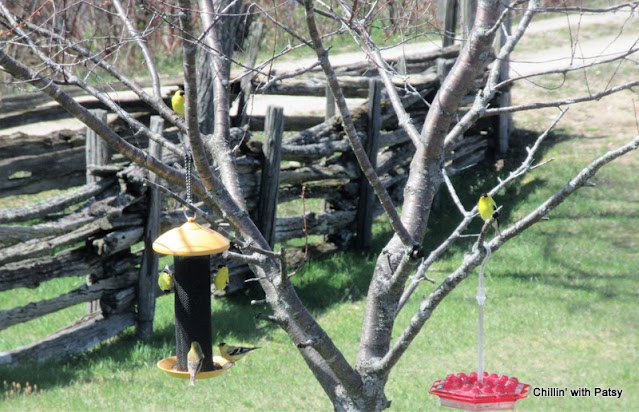 Gibbs stayed out with me while I started on it and when Jamie texted about me working for him again……………..yes!! fist pump!.............I finished the drawer I was working on and nipped in to town to meet him at the Mat. There are a few changes, a few new keys and an agreement on a pay increase in the form of not having to pay to do our laundry. That’s awesome and helps a lot, saving us about 160$. ♥ I wasn’t expecting an increase at all.

Back home, my son called, with an apology and a belated Mother’s Day wish. I was a bit worried that I hadn’t heard from him, hoping that he was okay. He doesn’t miss texting or calling on my day so it was quite odd. I’m glad to hear he is doing fine and he filled me in on all his ‘excuses (as he called them)’. He has been so busy with a lot of stuff going on so I completely understand and forgave him easily. 😊

I also chatted with M about helping him out tomorrow afternoon with his Kijiji ad for business so things are picking up. We were to receive another visit today between 3:30 – 5:30 from Mr. Appliance but got notice that they are running late and did we still want them to come tonight? YES! I still am not putting too much hope in it being fixed with this replacement board BUT I’m also trying to be positive. LOL

Bill was home shortly after 4:30 so at 5:30, he lit the barbecue so I could grill the bacon/cheese sausages for supper. I put together a coleslaw salad to go with it and it all tasted very good. The sausages in freshly baked buns from Foodland’s bakery were yummy.

Because I’d moved my laptop out to my SS in the event they came earlier and I had to entertain Gibbs so after supper, I left the boys inside and returned to write my post. Later, I won’t be doing that, they’ll have to work around him. He’ll eventually settle down but I won’t be sitting out here for too long, even though it’s quite cozy. The only new programs on tonight are 9-1-1 and 9-1-1 Lonestar so we may be recording them on our PVR. Depends on what time things take place. ☹

This was a good day. I got some good news from Jamie and heard from my #1 son. ♥ Bill didn’t have too long of a day, at least he was home at a decent hour because of the early start up. The winds are still stupid up here and twice has taken our mat (that never moves!!) into a roll. Good grief! It’s like something in the atmosphere has shifted and the winds are trying to play catch up. I hope you’ve enjoyed your Monday.

PS: David and Juliette from Mr. Appliance arrived at 7:30 and by 8 pm, they were leaving. Gibbs was very good inside while they were here and the best news is that the fridge seems to be running properly and the freezer has gotten very cold. Now, the waiting begins and we'll see what it's like in 4 hours. ✌