Monday, May 2nd began another ‘work week’ but not for us. We kind of only work when we want to. 😊 We were up by 7:30 and each had our showers before starting the day. Two things happening today: Mr. Appliance was coming, first appointment of their day, to install the new mother board in our fridge and our friends were moving on to their next destination.

Being full time rv’ers, like us, they move around for the summer to various locations, unlike us. They are also members of Harvest Host so have new adventures wherever they go. David and Juliette from Mr. Appliance arrived by 8:30 and left by 9. Duncan and Patty dumped their tanks and pulled out before 10.

It is always sad, in a way, to see our friends leave but we are happy to hear that they may possibly be back at the end of the month. 😊 As for the fridge, after our company left, I came inside to start on our grocery list. We need to start over in the fresh food and meat department. However, the fridge had to cool down before we could move anything from the bar fridges and cooler into it.

After a couple of hours, it wasn’t cooling down, although at first the freezer seemed to be cold. I made us poached eggs on toast for lunch and we checked it again only to discover that the temperature was rising instead of dropping. LOL so Bill placed a call to their office and they will be back at the end of their day.  So, here we are again, waiting. Blech!

It started out as a drizzly morning but that has stopped and now it is just dull. With a forecast of 10C/50F to 13C/54F over the next few days, we aren’t expecting miracles but with the low wind today, it feels relatively mild out there. I was going to bake a cheesecake/pie today but that was when I thought our fridge would be ready to use. In this case, I’ll wait. 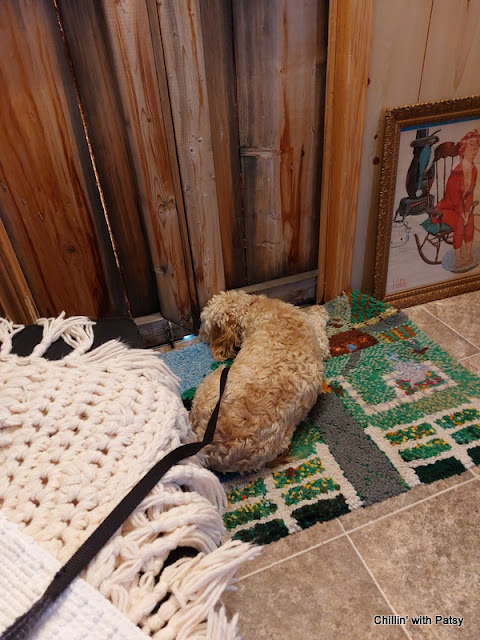 As I said yesterday, my rash is definitely gone. I wish the cold had followed it but it is still hanging on. It’s better, bit by bit, but now Bill’s is at its peak. ☹ He put a small heater on in the Hangar and went down to putter around. I never know what he’s doing but he has a tv and his planes so he isn’t bored, that’s for sure! Gibbs and I stayed up here and just hung together. I turned my vet shows on around 4 so that entertained us.

David and Juliette arrived around 6:15 and because Gibbs wasn’t settling down with them in here, he and I went out to the Bunky to listen to the radio but mostly to keep him out of the way. It isn’t warm out there so I covered up in the blanket and for a while Gibbs would sit with me on the futon but mostly, he lay at the door pining for the action inside the Suite.

Bill came out to tell me that they determined that not only the mother board was blown but also the fan motor, which explained why the fridge wasn’t cooling down. Unfortunately, the one they had in their van was not suitable so a new one has to be ordered. Good grief! I had a feeling it wouldn’t be fixed today so here we go again and yes, more expense at the end of it all.

Bottom line, we’re still using the bar fridges and cooler but tomorrow I still need to pick up a few groceries. We’re running out of food! When they left, around 7, I reheated some of the cooked ground beef and cooked a box of mac and cheese. Blended together they made our supper and it tasted quite good! I thought I had some veggies in the cupboard to add, but I didn’t.

We loaded the dishwasher and sat and watched American Idol. Gibbs seems out of sorts tonight and has gone up to bed already. It’s only 8 o’clock. He did eat his supper at 6 though so that is good. ♥ This was a good day but things didn’t quite work out as planned. Stay tuned!