Another Mixed Weather Day, Got my Job Done

On Wednesday, May 25th Bill was up and moving early again. Gibbs had come back to bed with me and went right back to sleep. He knows the routines like he’s been living with them for decades. 😊 I was up around 6:15 and the little guy and I went out for our walk. 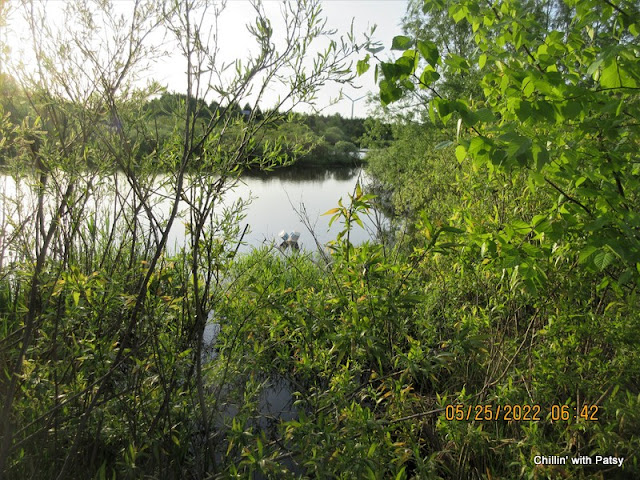 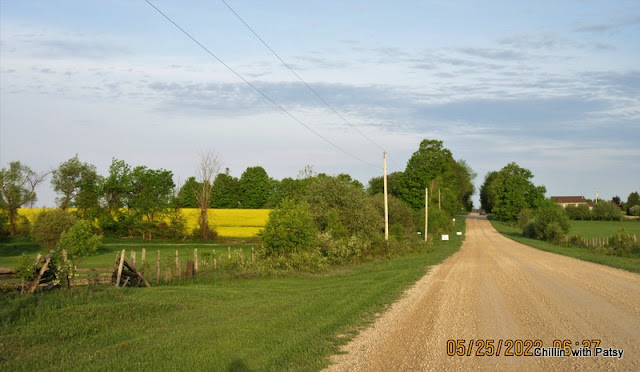 When we returned, Bill was in Ptooties backing out of her spot. We said goodbye and came indoors after watching him disappear down the lane.

It was a damp morning although it wasn’t nor hadn’t been raining. It just felt like it had. I had my tea inside with Gibbs on my lap in ‘our’ recliner. He started shivering and I realized that it was chilly inside, with no heat on. Rather than move him, I reached my hoody from the back of the chair and covered him up with it.

He stopped the shivers and dropped off to sleep. I wondered if he was feeling alright because he slept for 2 hours. So soundly that I checked a couple of times for his breathing.

I played my Wordle and Phrazle games and read my book to pass the time. I felt cool too so was glad for his warmth on me. 😊 At 10, I went out to see if I would have any luck with the weed eater today. Bill had it running last night and filled the tank with fuel. It was up to me now! At the first 3 or 4 pulls, I was having no luck but, on the 5th try, it started up and died. Encouraged, I pulled again and finally she was running like a charm. I geared up with a face shield and ear coverings.

I wasn’t cool any longer, warmed up quite nicely within minutes. I finished the area and walked down to my garden, then Goose the Spruce and then across to my compost bin, along the fence, the evergreens, the apple tree and then along the wood pile. Mostly, any place I could manage in our general area. I felt that I had accomplished a fair bit before I needed to stop. There was still a lot of fuel left but I was tuckered out.

We have company coming on Sunday so I will finish cutting the lawn down the corral hill before then. We try to have it looking nice always but especially when visitors come. 😊 Gibbs watched my movements from his rope tether near the Bunky with nary a peep. He can be so good. I actually put his little coat on him before we went out until it warmed up. He looked so cute but I don’t think I got a picture. ♥

Then I went into the Bunky and worked on my puzzle. Gibbs wouldn’t eat his breakfast at all this morning for me. Not from his dish nor my hand so outside, I added some warm water and eventually, he cleaned it up quite quickly. I thought to myself that this was the answer. We came inside around 12:30 and I made a wrap for lunch. We kind of got stuck indoors, when my afternoon games took precedence and then my book. Oh, I also caught up on some blog posts. 😊

Bill got home around 4:45 and by then it had cooled down even more. The weather is still very strange. It was 14C/57F this morning and had risen to 19C/66F but it didn’t feel that warm because the sun was non-existent for the most part of the day. I unplugged from power and it was bright enough to keep our batteries fully charged at least. This morning, I packed up Gayle’s Keurig that they lent us and got our new one out. With it set up, my first cup was perfectly filled.

The borrowed one worked great but we never got a full cup no matter which setting we used. We will return theirs next time we see them. For supper tonight, I gave Bill 3 choices, all involving mini sausages, and he opted for pancakes. That was easy and we were eating by 6:30. By then, rain had spattered across The Ridge but it wasn’t heavy so not a wash out. Gibbs wouldn’t eat his kibble w/gravy tonight, of course, just when I thought I had the answer. He’s a puzzle.

While Bill made his lunch, I replaced my phones screen protector and boy, does that look better! My old one was scratched badly. They say it has a lifetime warranty but we’ll see about that. I will register anyway. 😊 This was a good day. I accomplished what I’d planned and more so feel good about that.