A Summer Day as the Weekend Arrives

On Friday, May 20th Gibbs and I were up at 6:30 to see Bill off at 6:45. Once he left, we followed, out the lane and down to the corner. It’s a beautiful morning15C/60F for a walk. Our forecast of 27C/81F changed for some reason according to the local radio station. They’re saying only 20C/68F but after being outside for a while, it feels hotter than that. They're wrong again. The rains will soon descend upon us and change it anyway.

I had my tea inside with Gibbs and played my 3 Wordle games plus 1 Phrazle game on my phone. I love the challenges they all present but get a kick out of figuring out the popular phrases in the latter. 😉 Two sisters, my daughter and a couple of nieces play them too so we share our results. Some days the words come easier than others, maybe depending on whether we have finished our first brew. Oh! I also share results with friends and bloggers, Nancy and Doug. ♥

When Gibbs and I went outside, it was nice to see the clouds moving out of the way, thanks to the winds, which were quite strong. We walked up to the garden and he ran around like a fool while I picked my first stalks of rhubarb.

They aren’t big nor plentiful but it’s a start. I also checked my vegetables and was pleased to see 2 rows of little spinach and chard leaves now above ground. Yay! Following instructions from Donna, I’ll thin them once they are about 2” tall.

Then, we settled at my shed. Ptooties Place, Ptooties Palace or something simpler?? Help me make a decision with a name please! It doesn’t feel right not to have one. 😊 I worked on the puzzle and Gibbs did his scouting, then his resting ‘thing’ as only he can. At 11:15, we came inside so I could get ready for his grooming at 1 o’clock. I had something to eat and washed his tummy. One of our trees has sticky needles and he always gets them caught on his belly and feet. I wanted to get them out of his hair before he goes.

At 12:30, he was so excited to go along that he jumped up into the back seat of Black Beauty with no hesitation. 😊 He still does a lot of whining at the beginning of a ride but I’ve learned to ignore it – mostly. Since we were a bit early for his appointment, we walked down the street to the laundromat. I wanted to see if it needed cleaning while I was in town. Plus, I had a duvet cover and Bill’s jacket that needed washing so I made sure my favourite washer was available.

When I took Gibbs in to the groomers, he was just as sweet as ever. Kate came out and pet him, commenting on his size and how cute he was. ♥ Of course, he loved her attention! With 2 hours to kill, I first put the laundry in a machine and then took the opportunity to sweep the floors. They weren’t too bad nor was the Mat, so it wasn’t worth doing any more today. I’ll either go back in the morning or better yet, wait until Sunday. Jamie had been in and emptied the coin from the machines. I was lucky that someone had recently done a wash so I retrieved their $4.😊

Then I drove home and did some things around here. I vacuumed the Suite, re-hung a bird feeder out of Chippy’s reach, trimmed the lower branches and saplings of the apple tree at the back of the Suite and then worked on the puzzle until it was close to the time to pick Gibbs up. Bill had mentioned probably having a short day so I texted him to see when he might be on his way home. Turns out, he was enroute so he was picking our baby up on his way. Saves me the trip and fuel.

I worked on the puzzle until they came up the lane and there was our new little puppy again! I have to look twice because his coat always looks like velvet after a short groom. His actions are pure Gibbs though as he runs and experiences the air and freedom. He was konked out soon after and although he didn’t eat all of his supper, he ate some and that was good enough for now.

Bill grilled burgers for supper and we had ice cream for dessert. It was a very filling meal. We loaded the dishwasher and Bill drove over to the Acreage to get water into Mike’s trailer which is parked their for the summer. When he returns, he’ll bring a bladder full for us to use in the Suite. 😊 This has been a muggy day and although no rain, the winds are proving to be an issue that is yet to present itself. Overnight, warnings of strong gusts. Oh crap! 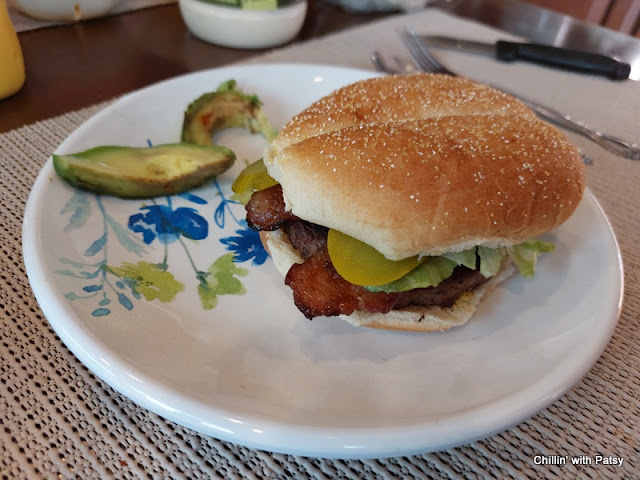 I worked on my blog and then tried to get into a new book. I finished The Street Lawyer earlier and highly recommend it. Excellent! Now David Baldacci’s A Minute to Midnight is waiting for me to start it. I’ve enjoyed the day, accomplished a few things and we now have a smaller but still lovable pooch in our home. I’m sure he feels wonderful!