Mother’s Day and a Gorgeous Sunday

On Sunday, May 8th we woke up to another bright sunny day. Perfect day for all of us Mom’s to celebrate our day any way we want. 😊 Gone are the days when I would see my children for a visit. They used to come when we lived in London but since we’ve moved a distance away, I don’t expect them to drive the distance. However, what a lovely surprise that would be! ♥

I had laundry to do, Bill would need his work jeans and tees this week so I made a tea in my to-go cup and headed into the Mat. It was recently cleaned (LOL one day, I’m sure I won’t even notice) and with 2 other patrons, I loaded 2 of the $4 washers. I don’t have a book on the go right now so just sat in the car for the 30 minutes and worked on my word games on my phone.

Back home, I was to learn that Gibbs was inside the house, not out with Daddy, because he was a bad boy. ☹ He followed Bill to the Hangar but instead of staying near him, he went directly to the muddy pond edge and began eating the leaves. Yeuch, how can that even be appealing? He wouldn’t ‘drop it’, he wouldn’t ‘come’ so once Bill got up him to the Suite and inside, that’s where he was. Oh dear. 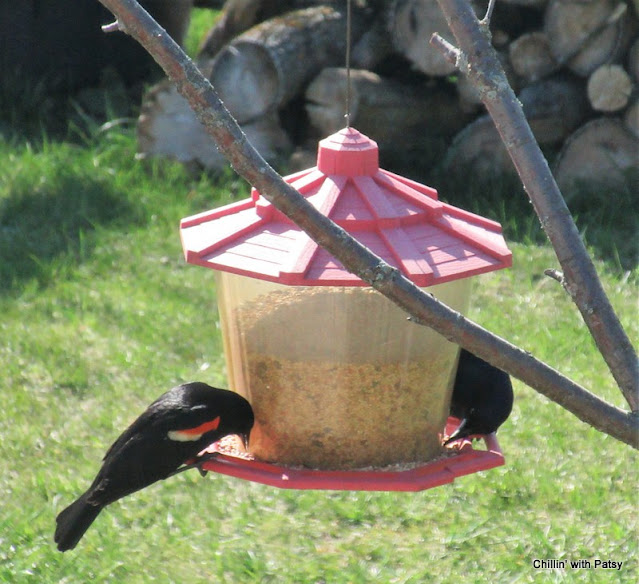 Bill had most things out of the storage shed, today’s project, and was working away while I hung the clothes. They shouldn’t take too long to dry with the winds and the sun. I do wish the winds weren’t so strong during the day, it would be quite lovely up here. It was great to hear from my daughter, Bridgette, and she immediately knew I was outside. “Are those birds? Are you outside?” 😊 We had a nice chat before signing off.

Bill brought out my 2 tubs of garden knick knacks and I began placing them around in their respective locations. Gibbs came out with me but I put him on his rope leash nearby. I filled 4 bird feeders and discovered yet another hummer feeder. I hope they make an appearance this summer as I’ll be making up batches of feed.

Donna told me last night that the funky little hanging nest way up in that tree is an oriole’s nest. Yay! That’s awesome! I’m hoping they’ll return as well so got that feeder ready.  I took the hoe up to the garden and got almost half of it worked up, ready for planting. Around 1, we cleaned up and quit working for the day. Time to eat! We finished the chili on toast for lunch and then went back outside. 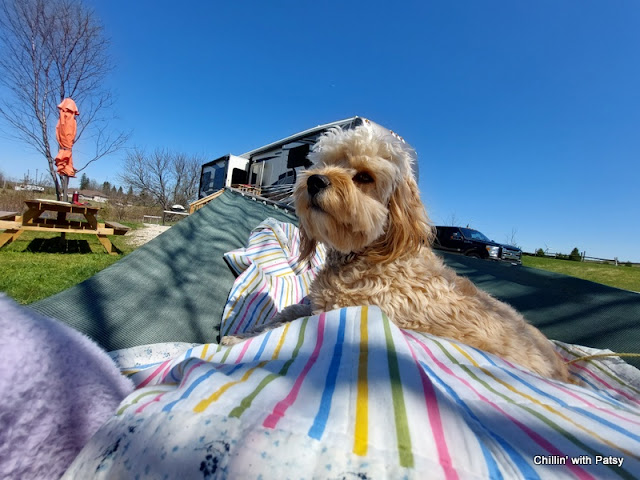 Gibbs and I stretched out in the hammock and it was cool enough in the half shade for a blanket. He loves the hammock; I’d forgotten that from last summer. Now he can jump up and off easier though. I brought the clothes in around 4 and came inside for a glass of beer margarita. Happy Mother’s Day to me! 😊 It’s sad not having a Mom (or a Dad) to celebrate with on these special days but I believe she is watching over us from heaven. ♥

For supper, debated cooking the pork loin roast on the Weber, like George used to, but the winds were too strong and it got too late. Instead, Madame IP did a great job! I spiced it with thyme, garlic pepper, salt, butter, brown sugar and parsley according to a recipe I found. I added potatoes and onions and when it was finished cooking, I made gravy. It was so tender and tasty! The whole supper!

We talked to Bill’s youngest daughter who is living out west in Alberta before we ate. It was great to see those sweet little grandchildren. They all spent the day at a ball tournament where Jess was playing and had rosy cheeks because of it. 😊 Easton and Hadley are growing so fast, it’s great to be able to see them through the phone screen. We loaded the dishwasher and watched American Idol.

I worked on my post and we’ll see if it gets finished tonight. This was another awesome day and I enjoyed my Mother’s Day, getting texts and phone calls from the ‘kids’. ♥ Happy Mother's Day to all you Mom's out there too!

Posted by Patsy Irene (Chillin' with Patsy) at 7:32 PM