Friday = Chore Day and a Tumble

Friday, May 6th started with another nice morning. The sun wasn’t strong enough to burst through the clouds but it was trying to poke out. When Gibbs and I came downstairs before 7, Bill was in full work mode. He was soon ready to leave so before I left for our walk, kissed him goodbye. I walked to the south this morning but we didn’t get too far around the corner and Gibbs was ready to turn back.

We met Bill on North Line for a final ‘have a good day!’ When I let him off the leash at the end of our laneway, he ran the whole way without stopping once. I remember little Clemson doing the same thing. ♥ Straight up to the deck and back to check and see where pokey Mom was. 😊 . Gibbs wasn’t interested in his food again this morning until about 9:30, he searched upstairs for Daddy as soon as he got inside. 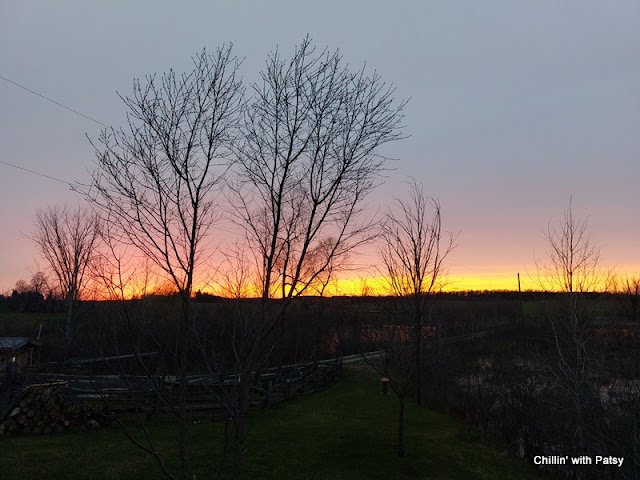 I finished my tea and played my 4 online games (WordHurdle now has a 4-letter, 5-letter and 6-letter word to guess PLUS Phrazle which is a phrase to figure out by guessing the letters. I love it and it is very good for my old brain, keeping it active. What a thrill when I guess them! Childsplay, you say? Maybe, but that’s good, right? 😊 Then it was time to get to work. I removed the scatter mats for a good shaking outside and got the vacuum out from under the bed.

Gibbs disappeared up onto my chair, for the most part, except for once when he got down to fight with the nozzle. No doubt protecting me. The floors were really messy, mostly with little teeny stones in the corners and around the edges of the woodwork. With my Norwex wet mop, I washed all the washable floors. That only leaves out the bedroom. Wouldn’t you know it was after moving someone’s food dish and washing that area that they decided to eat!

With those chores done, we went outside for a little while. I found a few more locations for more dahlias but some of these bulbs look and are pretty old so I was putting 2 and 3 in a hole. If they don’t come up, they will be tossed in the composter in the fall. We came inside for lunch and I finished the chicken noodle soup and I ate the last pork chop.

Bill called at noon and told me that Mr. Appliance will be back on Monday afternoon to install the new mother board so another attempt on record. 😊 At least they haven’t given up!

We went back out and I hung my desert painting from last summer in the Bunky. It’s so big that the tv was going to be blocking the road runner in the picture. Hmm. I moved things around so the tv would be in the corner but now I’m more anxious than ever to get this futon out of here.

I was able to load the two mattresses into Black Beauty’s back seat and now Bill just has to figure out a way to strap the futon into the bed with the hitch. At least we don’t have far to go tomorrow with it. Today, I had a message regarding the size of the pet crate we’re also selling. It’s a small one so I don’t get too hopeful it will work for others. It was the right thing at the right time for us until Gibbs grew out of it. 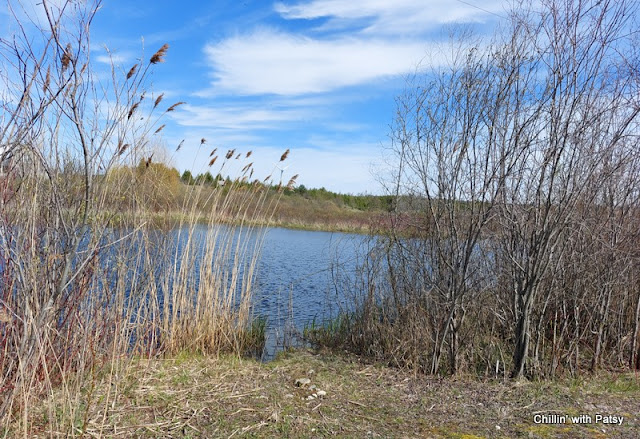 Gibbs and Chippy were playing hide and seek today. Gibbs was it and Chippy was hiding in the fence rail. I was working in the garden on the opposite side of the corral and could hear Gibbs’ speaking bark. Like, ‘come out of there so I can get you!’ I’m not worried that he will catch the little guy but he’s having fun trying. 😊

We walked down the lane and when Bill took off across the west side field barking at Father Goose, I waited to make sure he came back. He did and he had a proud face on. I’m not crazy about the fact that he has to chase them unless they are walking up the hill to our trailer. Too much goose poop in too close proximity for us walking. No mail today. I closed the sheds up and we came indoors.

I mentioned a ‘tumble’ in the title. Yah, well, old miss clumsy tripped going into the storage shed. You know you can’t always stop yourself but you still try. I went flat out on the floor so I’m glad there wasn’t anything in the way. We’ll see tomorrow what bruises, if any, I get from that! Aside from that, this is the best I’ve felt as far as my cold. This morning I had quite a bit of phlegm in my throat but a few salt water gargles took care of that nicely.

With a nice cup of tea at 4 and a couple of Nutter Butters, we waited inside for Bill. He was home before 5, it’s about 40 minutes to Walkerton where the jobsite is. They are working on a bathroom in the basement of a home. Gibbs and I both got our bangs cut today and he got a good tooth brushing. He loves the taste of the paste so doesn’t try to get away from me.

Homemade fish and chips tonight. Not the fish – teehee – . I forgot we had some fish left, but with no frozen fries in the house, I cut our own from the potatoes I bought the other day and cooking them in the Fry Daddy. I cooked the fish for 20 minutes in foil in the convection oven but they weren’t half done by the time the fries were ready. Darn! I transferred them to the frying pan and finished them. 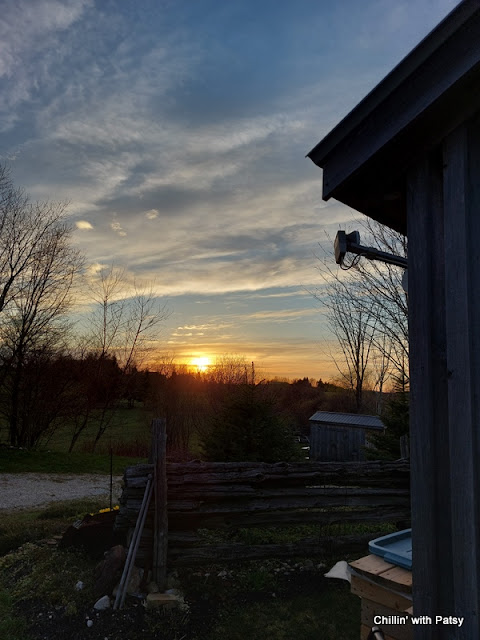 It’s not a fish we’ll buy again. I didn’t enjoy it last time cooked in Rosy so we’ll decide whether we’ll keep the last 3 pieces. Bill wasn’t fond of it tonight either. We loaded the dishwasher and settled in for the evening. This was a great day. Bill said they moved to Kincardine to do some drywall mudding so they weren’t working on the bathroom all day after all. No complaints so far! 😊

The weather has been pretty decent today. We reached 18C/64F. The clouds mostly disappeared by early afternoon clearing even more for late day.  Another lovely sunset.

Thank you for your visit on this Friday.

Posted by Patsy Irene (Chillin' with Patsy) at 7:16 PM