On Thursday, May 12th I got up to say goodbye to Bill with the full intention of going back to bed with Gibbs. I didn’t sleep much between 10 and 1:30 and there is only one culprit to blame for that! He’s a furry little 4-legged squirmer. Granted, it was up there in the bedroom and I’d closed the big windows that faced the yard because of the noisy frogs. However, I did open the little one beside my head. 😊 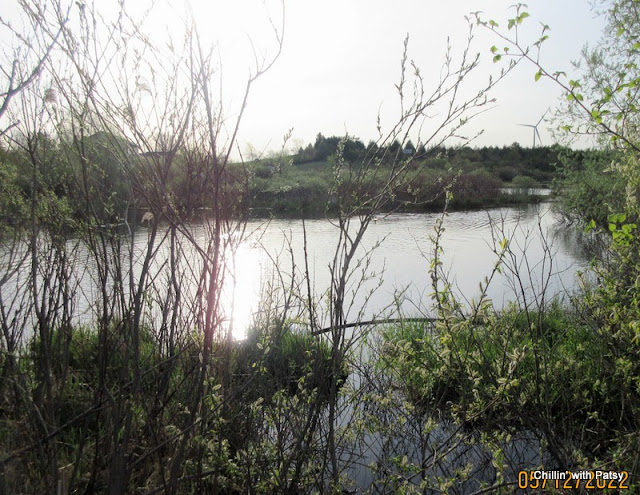 Well, that just meant ‘someone’ had to be next to it as he was very hot. That in turn meant that he was laying above, near and beside my head to get close to the window. Good grief! When I repeatedly told him to lay down and go to sleep, he laid right where he was, which didn’t help me at all. Bill seemed to be sleeping soundly through it all and once he woke enough to admonish Gibbs to go to sleep…….and the little pooper did! At my feet. The rest of the morning, I slept.

We went back to bed after Bill left and at least I rested until 7:30. Gibbs and I went for our walk to the corner and back. There was nothing definite on my plate today but soon after my tea, at 9, I went up to the garden to plant some of the spinach and Swiss chard seeds. Gibbs was allowed off leash but that lasted for about 15 minutes and he was playing in the garden where I was working. That was no help at all so I coerced him into coming down to his rope leash. He’s too smart for his own good and hence avoids me like the plague. 😊

I finished two half rows and IF they come up properly, in two weeks I’ll thin them and replant more. I was disappointed though to see and feel the black flies are back. LOL I had to cover up and don my netted hat in order to finish hoeing the rest of the garden. It is ready for planting now.  I should have some tomato and pepper plants soon to get in the earth as well. These are the only things I’m really needing in my garden; I think.

When we came inside, I made another tea, instead of a coffee, and dusted the entertainment woodwork and coffee table, replacing things that had been tucked in the table since before we left for home. We’ve had seagrass baskets on the lower shelf of the coffee table since 2016 and although they are really handy for storage when travelling, they scratched the wood and the plastic shelf liners just made it sticky. What a mess.

Time to get rid of the baskets, at least from there. I might be able to use them in the SS. I had to use rubbing alcohol to get the stickiness off but eventually had success and finished by polishing the wood. My Photo books and a few coffee table books of Bills fit nicely on the shelf – for now. When we move, I’ll come up with something.

With that done, I had my shower and then refilled the soda in the fridges. Now the obar fridge can be used for its initial purpose again. ♥ Yay! I’ve had 2 shortbread pie crusts that I bought in Quartzsite for $1 at Ken’s Grocery and finally decided what to make. A pineapple cheesecake pie. Oh my! It was a no bake recipe and the pie crust was ready to fill. It’s going to spoil my sweetie but after working so hard, he deserves it. He just has to share with me.

I was tired of listening to Sirius radio as well as the local station so played my cd’s while I was working inside. Blue Rodeo, Pokey LaFarge, Billy Ray Cyrus and Johnny Reid are my favourites. Throughout the day, between Gibbs and I, we kept Ma and Pa Goose at bay. They come up from the east pond about 2/3 of the way down the hill and attempt to come up. If Gibbs sees them, we allow him to bark at them to shoo them back down again. Today, he was sleeping on the floor when I saw them so I had to go out and shoo them off.

The temperature today is hovering in the ‘summer’ range but I know it will only last until the weekend before it drops off below seasonal again. Such strange weather, everywhere. The winds have been good for a couple of days, increasing a bit this afternoon but pleasantly.  Bill was home early, around 3:30, so it was a nice surprise. After Gibbs greeted him, I got my turn. My tail doesn’t wag quite as sweetly as a little puppy dog’s does. 😊

Bill hopped on the mower and got ¾ of the grass cut on the property. It isn’t all in need of a low cut by any means but some areas are quite long and with rain coming on the weekend, he wanted to get it done. We had haddock and chips for supper and I had coleslaw instead of the fries. I knew that dessert would surely fill me up if the entre didn’t. Bill was pleasantly surprised with the cheesecake and we both savoured every creamy bite. ♥

After turning the dishwasher on, I worked on my post and Bill turned some of our recorded programs on. Magnum PI and Swamp People was a good start. This has been another great day. I hope you are getting this decent weather too and if you are in the areas where the rains are drenching your land, I hope it clears up for your weekend at least.

PS - last night, we had Chapmans Black Cherry ice cream. It hasn't been in our freezer for about 6 months!

Thank you for your visit! Your comments are welcome!