On Memorial Day Monday, May 23rd we took full advantage of the outdoors. We were up at 7:30 and Gibbs and I started our day with a walk to the corner and back. It was a pleasant morning with the sun making promises we hoped it would keep. 😊 Gibbs is continuing his fussy eating habit, so much so that we have resorted to hand feeding him. Hopefully, that won’t last but for now, he’s at least eating. The funny thing is that he'll even eat the original food out of our hands now. Can't figure him out!

At 9, after my tea, I went outside and got my mower out. I wanted to finish as much as I could in the areas that Bill couldn’t get to easily with the big mower. I was pleased with what I got done before my battery died. Not sure if an hour and a half is normal, can’t remember, or if the battery needs to be replaced. It will do for now, I’m not spending more on it right now.

Bill came out and set to work on the water pump. He has spent a lot of time on this already, last summer included, and today was no exception.

He worked steady; first making sure the pipe that goes into the pond is situated properly with bottles for floaters to keep it in place; then getting a bladder of water from the Acreage to prime the pump and lastly to trial and error; working diligently with the pump. He had successes then puzzlement when they didn’t last.

I’ve never known someone so dedicated to at task not to mention the patience! It was 4 o’clock when he stopped for the day, transferring the remainder of the water bladder into the Suite. While he did that, I weeded the big flower garden, mostly from grass growing up through the phlox and geraniums.

Twice, I disturbed Mama Robin, who was sitting on her nest with new hatchlings, when I forgot and walked into the garden. She squawked at me and left her babies unattended. I tried to finish by crawling low to the ground. Soon they’ll be grown and gone. 😊

Gibbs was the best little guy today. When he was off leash, he did tempt fate a couple of times by following Daddy into the field where he was cutting and wouldn’t return when called. That’s how he ended up on the rope leash at the Bunky door. We both were close by and he just sat and watched us for the whole afternoon.

When I finished weeding, I started a new puzzle. What did I get myself in to? It’s a new 1000-pc puzzle and wouldn’t fit on the round table without me having to put many pieces in a box. The border was a challenge but one I took on eagerly. When we came inside, I still had 2 border pieces that I hadn’t found but there is always tomorrow. I made a tea and Bill poured himself a rum and Coke. I felt chilled so needed something hot.

It has been a really nice day for being as chilly as it was. 14C with some blue sky but mostly clouds after 12 noon. We didn’t have much wind and hardly any pesky flies around us as we worked. 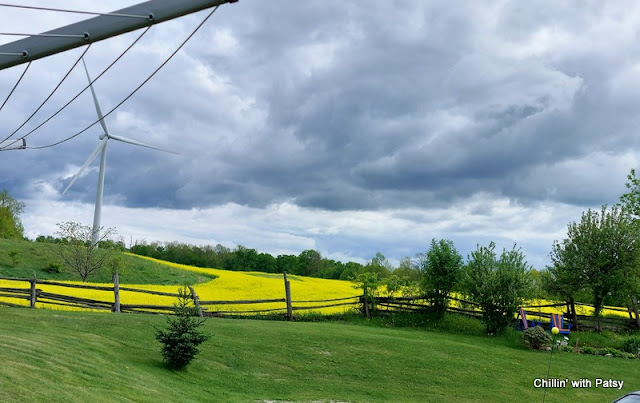 It was a good working day and when the sun returned, it was very warm. For supper, we had pork chops with stove top dressing instead of potatoes and a vegetable. 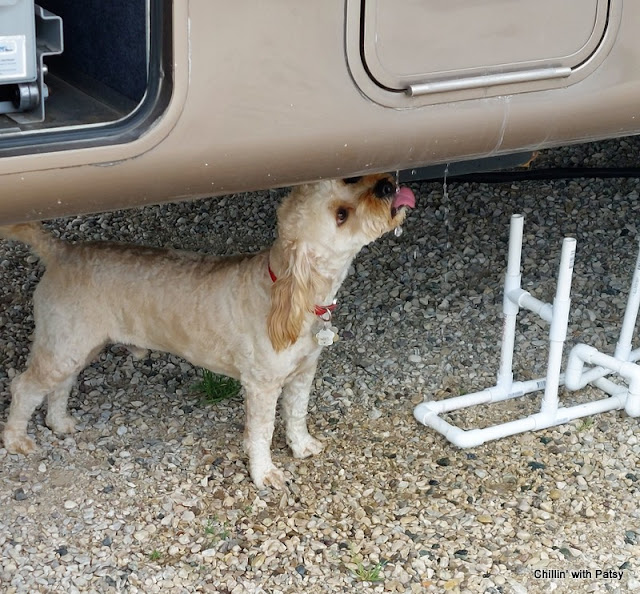 Monday night is our night for television so we spent a quiet evening together. Gibbs was tired out from all the fresh air too and it wasn’t a late night. Work for Bill tomorrow and cleaning for me in the morning.

By the way, last night we saw who was ‘crowned’ the American Idol but I won’t spoil it for anyone. We could’ve been happy with any of the final 3, heck, the final 5, but were very pleased with the victor! ♥

Thank you for your visit. Your comments are always welcome.

Posted by Patsy Irene (Chillin' with Patsy) at 6:15 PM